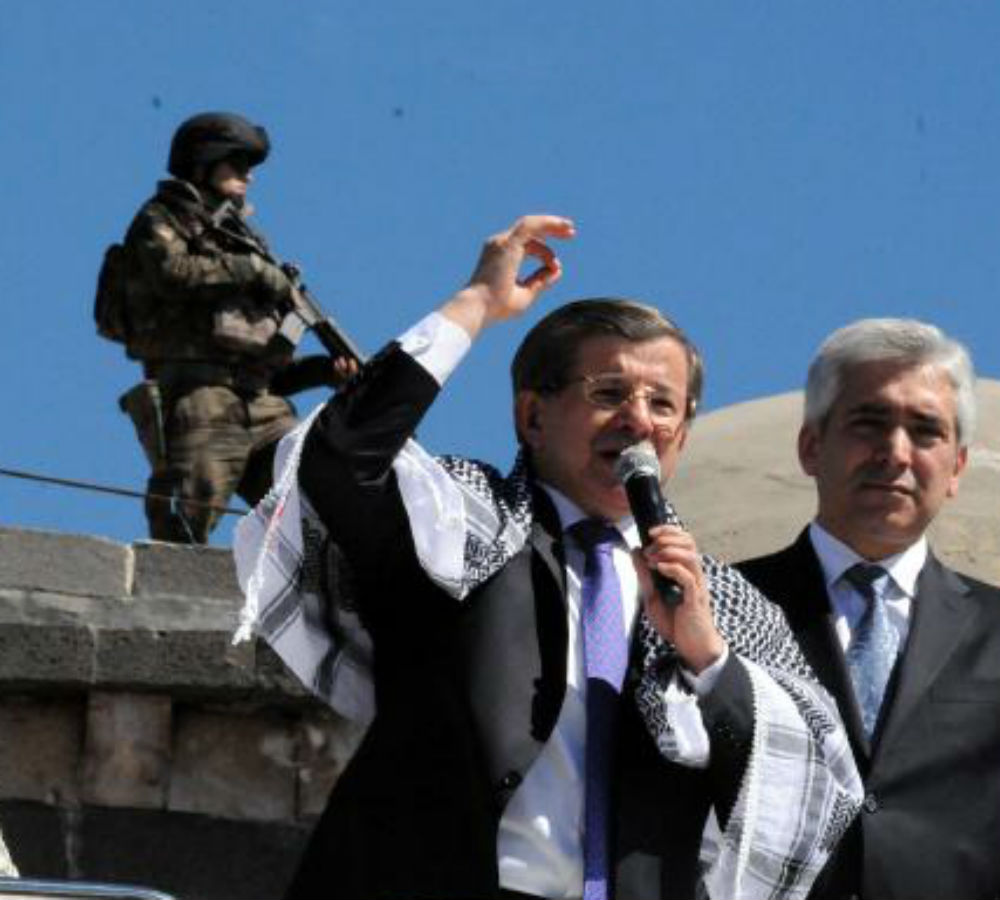 Turkish Prime Minister Ahmet Davutoğlu, who visited the Sur district of southeastern province of Diyarbakır on Friday has said he wishes God would take his life in Diyarbakır, denouncing a deadly attack on police ahead of his visit.

Davutoğlu addressed his supporters in Sur, which has been ravaged by the clashes between the Turkish security forces and the terrorist Kurdistan Workers’ Party (PKK) over the past several months, during a visit on Friday. He commented on a car bomb attack by the PKK targeting the police in Diyarbakır On Thursday that left seven police officers dead.

“They carried out these attacks yesterday. They thought Prime Minister Ahmet Davutoğlu, Diyarbakır’s Ahmet, would be afraid of these attacks and hesitate to come to Diyarbakır. They thought we would be afraid. I am saying it loud here: We were not, are not, and will not be afraid. If God will take my life, I wish he would take it here and I shall give it here together with my Kurdish brothers,” Davutoğlu said.

Seven police officers have been killed and 27 people injured in an explosion near a bus station in the southeastern province of Diyarbakır, when PKK militants detonated a car bomb.

The explosion took place as an armored military vehicle was passing in the evening hours of Thursday.

During his visit to Sur, Davutoğlu met with local officials in the region and exchanged views about the developments there following the end of the military operations. Davutoğlu will also receive information about planned restoration work of the historic buildings in Sur, which have suffered extensive damage during the clashes.

Sur is one of the southeastern districts which witnessed the most violent clashes between the Turkish security forces and the PKK. A long-lasting curfew imposed on the district has been partially removed recently. The curfews along with the clashes paralyzed the daily life for locals in Sur where many had to leave their homes.

Many historic structures in the Sur district have been damaged due to the combat, like the Dört Ayaklı Minare (Four-Legged Minaret). The famed minaret is a tall tower standing on four columns and serves as the single minaret for the adjacent Şeyh Mutahhar Mosque, built in 1500; the minaret is believed to be even older than the mosque.

Turkish security forces have been trying to clear southeastern towns and cities of PKK terrorists since last July, when a two-year cease-fire collapsed, shattering a settlement process launched by the government in late 2012 to end Turkey’s long-standing Kurdish problem, triggering the worst violence in two decades.