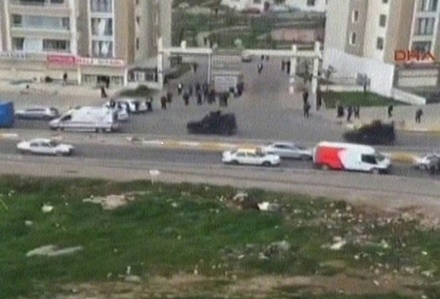 At least seven police officers have been killed and 27 people injured in an explosion near a bus station in the southeastern province of Diyarbakır, when terrorist Kurdistan Worker’s Party (PKK) militants detonated a car bomb.

The explosion reportedly took place as an armored military vehicle was passing in the evening hours of Thursday.

The attack took place in Diyarbakır’s Bağlar district when a police transport bus was targeted with a car bomb. Seven police officers have been confirmed as killed with 13 further police officers and 14 civilians injured, and taken to hospital. Several of the 13 injured police officers are reported to be in critical condition.

?The first footage from the #pkk car bomb attack in the city of #Diyarbakir. Many casualties.#Turkeypic.twitter.com/Pgh9Tp1BKk

#BREAKING
?A car bomb attack on a #Turkish security convoy/ bus just in the center of #Diyarbakir. pic.twitter.com/m5ilyATZDI

The bus was carrying police officers who had been brought to Diyarbakır as reinforcement’s for the security forces engaging in operations against the PKK. The car bomb is thought to have been detonated from a distance. Many windows of the nearby buildings were shattered.

The area in which the attack took place has been sealed off as security forces have launched a large-scale operation to target the perpetrators.

Turkey’s southeast region has been witnessing the worst violence since 1990s when the terrorist Kurdistan Workers’ Party (PKK) resumed its violence last summer, shattering a settlement process launched by the government in late 2012 to end Turkey’s long-standing Kurdish problem.

According to media reports, more than 300 members of the security forces have been killed in clashes in the region so far.

The operations against the PKK began after the frail ceasefire set up in 2013, as part of the settlement process was ended on July 22, 2015 when the PKK assassinated two police officers. The PKK said it had acted in retaliation for the state failing to prevent a suspected Islamic State of Iraq and the Levant (ISIL) militant detonating a suicide bomb in Şanlıurfa’s Suruç district and killing 34, injuring over 100.

Those killed in Suruç were preparing to take items such as books to Kobani, a town on the Syrian Turkish border that had been held by ISIL but was later seized by Syrian Kurdish militia. Nearly 40,000 people have been killed in clashes with the PKK since 1984, when the armed group launched its first attacks. The PKK is designated as a terrorist organization by the US, the EU and Turkey.