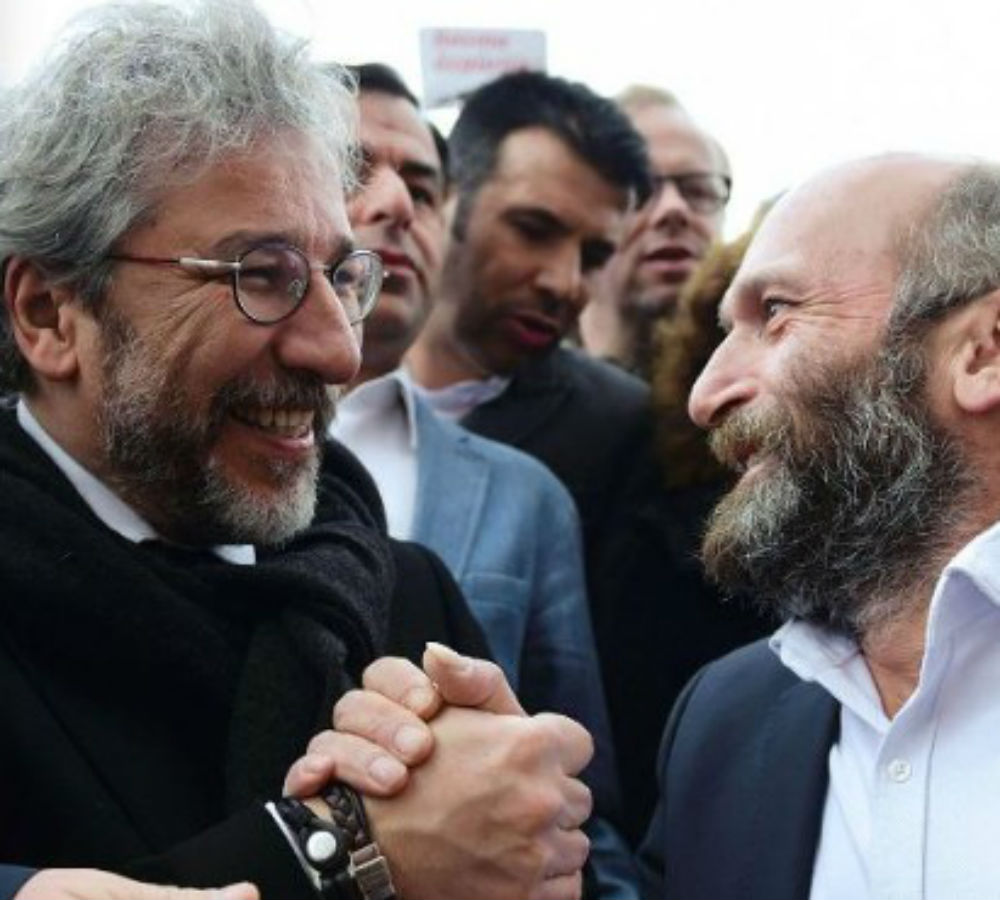 Two leading editors of the critical Cumhuriyet daily, who were released on Feb. 26 after the Constitutional Court said their imprisonment for publishing a report on alleged illegal arms transfers to Syria amounted to rights violation, appeared before an İstanbul court today in the trial in which they are accused of “espionage,” with the court immediately ordering the trial to be held in secret.

Accompanied by colleagues, foreign diplomats, representatives of civil society groups who wanted to observe the hearing and show solidarity with them, Dündar and Gül arrived at İstanbul’s Çağlayan Courthouse early on Friday.

During Friday’s hearing, the court approved requests filed by President Recep Tayyip Erdoğan and the National Intelligence Organization (MİT) to be co-plaintiffs in the case. The trial was adjourned until April 1. Soon after the start of the proceedings, the judge ordered the trial to be held behind closed doors, approving a request by the prosecution which cited “national security” concerns.

On Feb. 26, the Constitutional Court ruled that the rights of the pair had been violated through arrest, leading to their release pending trial after three months of incarceration. The ruling also stated “Their freedom of expression and freedom of press” was violated. Upon the top court’s decision, the criminal court handling the case removed the order of arrest.

A staunchly pro-government newspaper claimed earlier this month that the two editors may be re-arrested in the upcoming hearing of their trial.

The Star daily claimed in a report that the Constitutional Court “usurped” the authority of the local court hearing the case against Dündar and Gül, who are accused of espionage and revealing state secrets. Recalling that the next haring in their trial is scheduled for March 25, the daily said the İstanbul 14th High Criminal Court “will be able to” rule for the arrest of the two journalists if it cites new evidence.

Dündar and Gül were arrested on Nov. 26, 2015 on charges of membership in a terrorist organization, espionage and revealing confidential documents — charges that could keep them in prison for life. The charges stem from a terrorism investigation launched after Cumhuriyet in May of last year published photos of weapons it said were being transferred to Syria in trucks operated by MİT.

President Erdoğan, who has cast the newspaper’s coverage as part of an attempt to undermine Turkey’s global standing, said he would not forgive such reporting.

Dündar and Gül petitioned to the top court approximately two months ago, asking to be released. The Constitutional Court, which heard an appeal made by the two journalists on Feb.17, sent the files to its general secretariat for a ruling. The preliminary examination of the journalists’ petition was done by a five-member team from the top court.

In their petition, Dündar and Gül mentioned the fifth and tenth articles of the European Convention on Human Rights, which concern the right to liberty and security, as well as Article 19 of the Turkish Constitution, which concerns freedom of expression, and Articles 26 and 28 of the Constitution, which guarantee that everyone has the right to express and disseminate his/her thoughts and opinions in speech, writing, pictures or through other media, individually or collectively, were violated in their case. Earlier this month, the rapporteur of the court submitted a report on his opinion regarding individual petitions filed by Dündar and Gül, saying the journalists have been subjected to violations of their rights.

However, the opinion of the rapporteur was not binding on the court.

Despite the Constitutional Court ruling, Dündar and Gül still face trial. The indictment against the two journalists seeks an aggravated life sentence, a life sentence and 30 years of imprisonment on separate charges including “obtaining and revealing secret information pertaining to the security of the state for espionage purposes,” “seeking to overthrow the Turkish government” and “aiding an armed terrorist organization.”

The imprisonment of the two journalists for what was merely journalistic activity has attracted severe criticism from press organizations and journalism groups in Turkey and around the world.

In order to show their solidarity with the jailed journalists, some Turkish journalists launched a vigil called “Wait for Hope” in early December in front of İstanbul’s Silivri Prison where Dündar and Gül are jailed.

So far, dozens of journalists, artists and celebrities have taken shifts at the vigil.