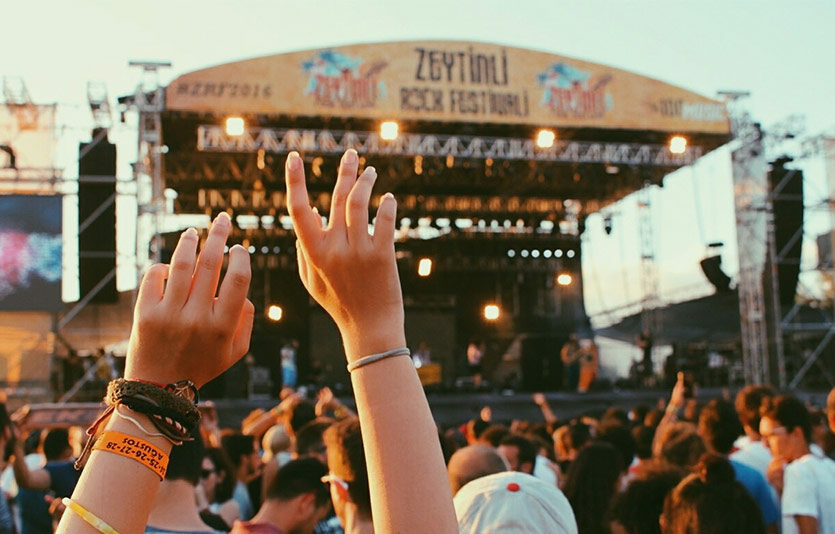 A number of musicians have expressed outrage over local authorities’ recent move to ban the Zeytinli Rock Festival, which has been held annually in the Burhaniye district of western Balıkesir province since 2014, with the local administration saying the ban is aimed at “public safety and health, public peace [and] protection of the environment,” local media reported on Friday.

Musicians in Turkey, who represent one of the occupations hit hardest by fallout from the coronavirus pandemic, are now struggling with bans imposed on their concerts by local administrations across the country under various pretexts.

The festival, which was to take place between Aug. 17 and 21 and included performances by about 70 musicians and bands, was banned by the Burhaniye district governor’s office days after a pro-government foundation called for it.

The Balıkesir branch of the Foundation for the Expansion of Knowledge (İlim Yayma Vakfı) on Aug. 7 released a written statement on Twitter condemning the festival for allegedly paving the way for “prostitution, rape and harassment taking place in public.”

More than a dozen events, including concerts and university music festivals, have been canceled by local administrations on various pretexts since mid-May in moves seen by many as attempts by the Justice and Development Party (AKP) government to interfere in people’s lifestyles and to try to force its Islamic values on the nation and have drawn criticism from musicians, actors, bar associations and human rights activists.

Musicians on Thursday reacted to the ban on the Zeytinli Rock Festival on social media, with some of them saying this was the last summer AKP government officials would be able to ban concerts and music festivals, implying that the government will change in the elections scheduled for June 2023.

Cahit Berkay, a well-known musician and one of the founders of the music band Moğollar, implied during a program on Radio Sputnik that İlim Yayma Vakfı’s move to call for the cancellation of the festival was hypocritical.

“Since İlim Yayma Vakfı cares so much about young people … did they express any views on the recently stolen [KPSS] questions? It turned young people’s lives upside down,” he said.

Berkay was referring to allegations that some of the questions for this year’s State Personnel Examination (KPSS), a prerequisite for placement in the bureaucracy, were stolen, a development that resulted in cancellation of the July 31 test sessions, which will be held again at a later date.

Gökhan Özoğuz, the lead vocalist and guitarist of the Turkish ska-punk band Athena, said in a tweet, “The Zeytinli Rock Festival is the festival of young people who are united against deceit, injustice and all the elements that disturb the peace of the society. The reason for the ban is clear.”

“[These are] the last struggles of this reactionary order that will go away in the first election. When those days come, we will perform at the most enthusiastic festivals,” Doğan Duru, vocalist for the music band Redd told the Birgün daily.

There are roughly 1 million musicians in Turkey, many of whom work without insurance and so have been unable to claim state benefits since the beginning of the pandemic.

More than 100 musicians in Turkey have died by suicide since the country introduced preventive measures against the COVID-19 pandemic in March 2020, according to the Musicians and Performers Union (Müzik-Sen).

A midnight music ban, which was introduced as part of coronavirus measures and has not yet been lifted, despite the easing of other COVID-19-related measures, is among the reasons why dissidents accuse the ruling AKP of interfering with people’s lifestyles.