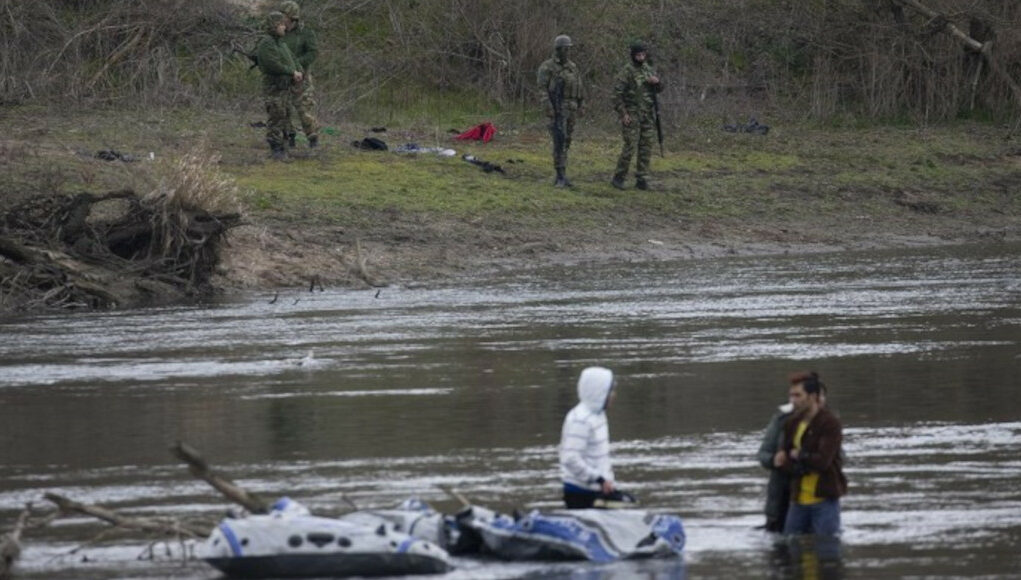 Greek soldiers on Friday pushed back 15 Turks, among them five children, who were fleeing President Recep Tayyip Erdoğan’s relentless crackdown on dissent by crossing the Evros River on an inflatable boat, held the children at gunpoint to threaten their parents and threw them into the river before forcing the boat back to Turkey, the brother of a victim told Turkish Minute.

The boat was damaged and was losing air. The group barely made it to the Greek side, where armed men wearing military uniforms and speaking Greek were on a boat hidden between the vegetation, apparently waiting for them.

The men took the five children onto their boat and held their guns to children’s heads, E.H. cited his brother as saying. After a stand-off between the asylum seekers pleading for help and the armed men, the latter threw the children into the water.

Ö.H. went to the rescue of the children and took them back to the boat. The group then was pushed back to Turkey, where Turkish gendarmes were waiting for them.

After a brief detention, eight adults were arrested and jailed, among them Ö.H.’s wife S.H, who is in the early stages of leukemia.

Ö.H. had already spent 44 months in prison on charges of membership in the Gülen movement, a faith-based group inspired by Muslim cleric Fethullah Gülen.

After spending 44 months in prison, Ö.H. was released on probation. He was a manager of an NGO with links to the Gülen movement and he struggled to find a job after his release but was unable to due to the demonization of the Gülenists, which led employers to avoid giving them jobs.

S.H. was also arrested after the failed 2016 coup but released pending trial and now faces at least 38 months in jail as a cancer patient, E.H. told Turkish Minute. She might not be released even if her treatment requires her to be outside prison.

Human rights activists and opposition politicians have frequently criticized Turkish authorities for not releasing critically ill prisoners so they can seek proper treatment.

The family wanted to avoid this fate but were pushed back to Turkey, leaving the children, who had a gun pointed at their heads and thrown into the river, traumatized.

Another pushback incident took place on May 3, when S.E. tried to make it to Greece via the same route with his nine months pregnant wife and another couple with a 5-year-old child. After arriving in Greece and walking for a while, they were stopped by the Greek police, who took their phones.

“A white transporter van came and picked us up. They took us to a forest,” S.E. said.

“After keeping us there for a while, they took us to another place. There were many police cars outside, but this was not a police station. Then they took us back to the forest where they had taken us before. Male cops strip-searched us, while a female police officer did the same with the women,” he recounted.

S.E. said they were put in a vehicle along with 50 others and were kept in there for eight hours before they were pushed back to Turkey.

“When we said that we want to seek asylum, why are you doing this to us, they replied, ‘Did you ask us when you were coming here?’ We were dying of suffocation. A child inside the car was screaming. The women were crying,” S.E. said.

“They attacked us, stripped us completely and took our money. They put us in the boats. Don’t do it, we said, that they would arrest us if they sent us back. They didn’t listen and they took us to Turkey by boat. Turkish gendarmes took us, and my nine months pregnant wife was arrested by court order. I was released because I was previously in prison for five years,” S.E. told Turkish Minute, referring to his release on probation. He had to turn himself in to serve his remaining jail time until October, and he was arrested and put in prison on Thursday after he talked to Turkish Minute about his experience.

Turkey’s crackdown on the Gülen movement

The Justice and Development Party (AKP) government launched a war against the Gülen movement, a worldwide civic initiative inspired by the ideas of Muslim cleric Fethullah Gülen, after the corruption investigations of Dec. 17-25, 2013 that implicated then-prime minister and current President Recep Tayyip Erdoğan’s family members and inner circle.

Dismissing the investigations as a Gülenist coup and conspiracy, the AKP government designated the movement as a terrorist organization and began to target its members. The government intensified the crackdown following the coup attempt in July 2016.

Purge victims who wanted to flee the country to avoid the post-coup crackdown took dangerous journeys across the Evros River or the Aegean Sea. Some were arrested by Turkish security forces, some were pushed back to Turkey by Greek security forces and others perished on their way to Greece.

The purge victims had to leave the country illegally because the government had revoked their passports.

According to data collected by The Guardian based on reports from United Nations agencies as well as the databases of civil society organizations, European countries pushed back 40,000 migrants, forcibly in most cases, between January 2020 and May 2021, and more than 2,000 migrants died during these pushbacks.

The pushback policy was supported by the European Border and Coast Guard Agency (Frontex) and has become systematic as the migrants, including children, who escaped wars were sent back, the daily reported.

A total of 6,230 pushbacks by Greece took place between January 2020 and May 2021, according to a report by the Border Violence Monitoring Network (BVMN).

In February 12 migrants froze to death after being stripped of their clothes and pushed back by Greek border guards. The incident sparked international condemnation.

According to a December 2021 report by Open Democracy, the number of Turkish refugees illegally sent back home by Greek border officials has risen dramatically amid a surge in migration that is fueled by President Erdoğan’s crackdown.

Interviews and documents received from lawyers in Greece and Turkey as well as from the family members of victims and the victims themselves, allege that Greece carried out at least 233 illegal pushbacks of Turkish nationals between May and December 2021 alone, compared to 98 pushbacks tracked in 2019.

All of those pushback victims fleeing persecution in Turkey made it to Greece by crossing the land or sea border. They shared their locations with lawyers or family members via messaging apps, or sent pictures and videos of themselves in Greece, in a bid to prove that they had arrived inGreek territory and to avoid being returned to Turkey.

Pushing refugees back to countries they fled is illegal under the principle of non-refoulement, which forbids a country from forcing refugees or asylum seekers to return to a country in which they are liable to be subjected to persecution. Athens has continually denied allegations about its use of this practice.