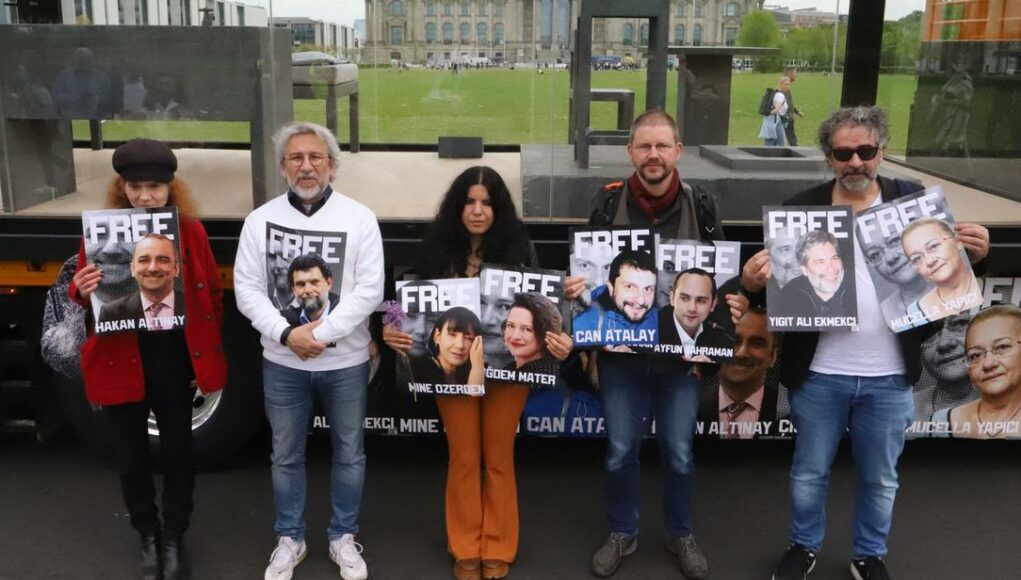 Prominent journalists, human rights activists and artists came together in the German capital of Berlin on Wednesday to hold a march in protest of the convictions of businessman and rights defender Osman Kavala and seven others in a controversial trial in Turkey, Deutsche Welle’s Turkish edition has reported.

The protest was attended by exiled Turkish journalist Can Dündar, Turkish-German journalist Deniz Yücel, writer and journalist Aslı Erdoğan, artist Zehra Doğan and human rights activist Peter Steudner, all of whom were jailed in Turkey in the past few years for their work, in addition to executive director of Reporters Without Borders (RSF) Germany Christian Mihr and Amnesty International’s Germany representative Markus Beeko.

An İstanbul court on April 25 sentenced Kavala, who had been behind bars without a conviction for over four years, to aggravated life on charges of “attempting to topple the government,” while sentencing seven other defendants to 18 years each on charges of aiding the attempt due to their alleged role in the anti-government Gezi Park protests in 2013.

The protestors, holding photos of the Gezi Park trial defendants, marched past the Federal Chancellory building, the German Parliament, the Representation of the European Commission in Germany and the Turkish Embassy.

A replica of a prison cell from İstanbul’s notorious Silivri Prison, where most political prisoners are held, was loaded on a truck that accompanied the protestors during their march.

Writer Erdoğan, who took part in the protest in handcuffs, said Kavala was given a life sentence just because of his efforts to protect the trees in Gezi Park.

“There are currently tens of thousands of people in Turkey’s prisons now who were given jail sentences based on nonsense charges. And the prison conditions in Turkey remind one of the conditions during the Sept. 12 [1980 military coup]. I will carry these handcuffs until all the political prisoners, not only in Turkey but also around the world, are free,” said Erdoğan.

Journalist Dündar said the Turkish court has not only punished the eight defendants in the trial but millions of others who took part in the protest with a desire for a democratic Turkey.

The Gezi Park demonstrations, which took place in the summer of 2013 in reaction to the Justice and Development Party (AKP) government’s attempt to destroy one of the few green spaces left in İstanbul, quickly turned into a nationwide protest against the authoritarian policies of then-prime minister and current president Erdoğan.

Eleven protestors died and thousands more were injured as they were brutally suppressed by the police on Erdoğan’s instructions.

Yücel called on the German government to take the necessary lesson from its “flawed” policy towards Russia, which has been waging a war on Ukraine since Feb. 24, and not to be a “collaborator” in crimes committed by autocrats.

RSF’s Mihr called on the German government to take more action for the maintenance of freedom of the press in Turkey and to pursue a foreign policy based on values, while Amnesty’s Beeko said the “dramatic, nonsense and arbitrary” court decisions targeting Kavala and other civil society leaders should be taken as an alarm that will wake up the German government and the European Union about the course of developments in Turkey.

A leading figure in Turkey’s civil society, 64-year-old Kavala was born in Paris, educated in the UK and ran a cultural center before being thrust to prominence. He was accused of financing protests against then-prime minister Erdoğan’s government during large-scale protests in 2013 and involvement in a failed military coup in 2016. The latest ruling only covered the case stemming from the 2013 unrest.