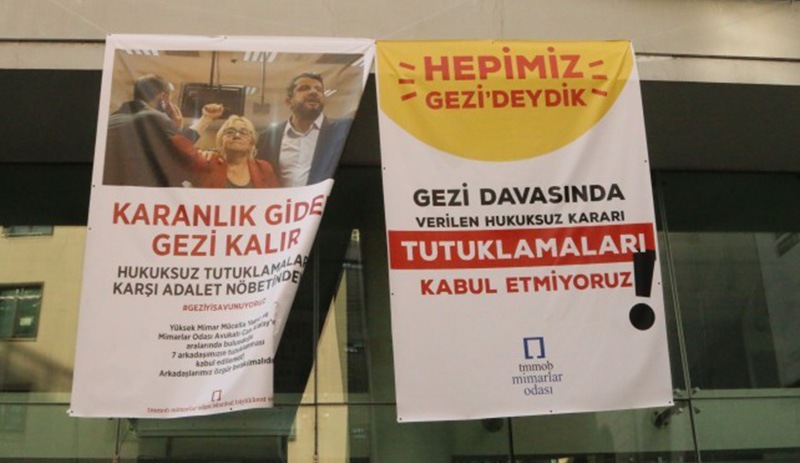 The Turkish Union of Engineers and Architects Chambers (TMMOB) has launched a “Justice Vigil” in protest of a recent verdict sentencing businessman and rights defender Osman Kavala to life in prison and his co-defendants to 18 years each on charges of instigating the anti-government Gezi Park protests, local media reported on Thursday.

Earlier this week an İstanbul court sentenced Kavala, who had been behind bars without a conviction for over four years, to aggravated life on charges of “attempting to topple the government,” while sentencing seven other defendants to 18 years each on charges of aiding the attempt.

TMMOB and its trade unions staged the first vigil in front of their branch in İstanbul’s Beyoğlu district on Thursday, condemning the court’s verdict on Kavala as well as Mücella Yapıcı, Tayfun Kahraman, Çiğdem Mater, Hakan Altınay, Mine Özerden, Can Atalay and Yiğit Ali Emekçi.

Speaking during Thursday’s event, Eyüp Muhcu, head of the Chamber of Architects, described the verdict in the Gezi Park trial as “a black stain, incompatible with the law,” expressing support for the defendants for “fulfilling their professional and social responsibilities to protect the historical Taksim Square and Gezi Park.”

The protests in 2013 erupted over government plans to demolish Gezi Park in Taksim. They quickly turned into mass anti-government demonstrations that were violently suppressed by the government, leading to the death of 11 protestors due to the use of disproportionate force by the police.

According to Turkish media reports, the Chamber of Architects hung banners reading “The darkness will go away, Gezi will remain. We are at justice vigil against unlawful arrests,” on its branch buildings and will continue holding the vigil between 5 p.m. and 8 p.m. every day.

Meanwhile, 177 actors, directors and scriptwriters on Wednesday signed a petition titled “Open call from filmmakers” in which they condemned the verdict in the Gezi Park trial that they said was “clearly aimed at building an empire of fear” and demanded the support of other filmmakers.

“We won’t be mere spectators of this injustice. We won’t be silent. We’re not afraid, we won’t be intimidated!” the filmmakers said, adding that no political power has the right to demonize, terrorize and punish citizens who exercise their constitutional right to peaceful demonstration and protest.

“We, as the filmmakers of this country, are the words, the voices [and] the faces of the society we have come out of. We consider it an obligation to turn our anger at this decision into hope and courage and do our best to bring our country out of darkness and into the light, and [we consider it] a duty to build together a Turkey where we can live freely,” they said.

A leading figure in Turkey’s civil society, 64-year-old Kavala was born in Paris, educated in the UK and ran a cultural center before being thrust to prominence. He was accused of financing protests against the then-prime minister and current President Recep Tayyip Erdoğan’s government during large-scale protests in 2013 and involvement in a failed military coup in 2016. Monday’s ruling only covered the case stemming from the 2013 unrest.