According to a Ministry of Maritime Affairs statement, the two men, aged 32 and 33, crashed off the island near Athens after they ran out of fuel. 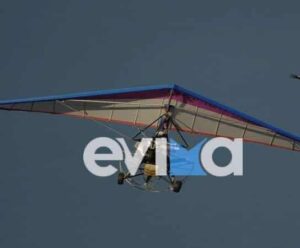 Local authorities were alerted by fishermen who saw the glider falling into the sea.

“They had left Smyrna in Turkey [headed for Athens. When it ran out of fuel the glider crashed] off the port city of Karystos,” the ministry statement said.

The two men were taken for medical treatment in Karystos.

They were taken into police custody because they did not have the appropriate travel documents.

According to a report in the Greek City Times, the two men were former police officers in Turkey who hoped to seek asylum in Greece.

Since then, there have been numerous cases of Turkish citizens fleeing their country seeking refuge in Greece or political asylum in other European countries.