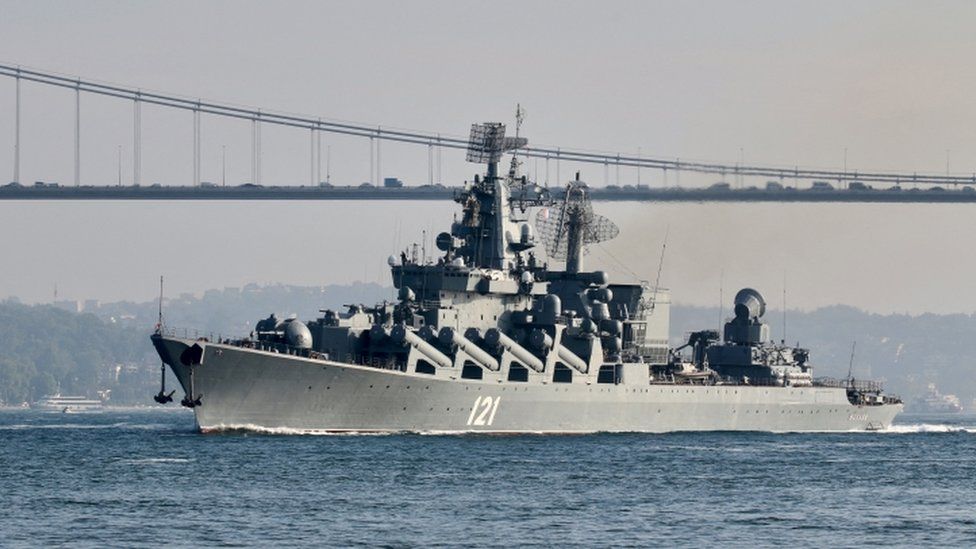 The Russian Navy’s flagship in the Black Sea, the Slava cruiser RTS Moskva (121), sank on April 14 due to “stormy seas,” according to the Russian Defense Ministry, while being towed toward the naval base at Sevastopol in Crimea. The Moskva was built during the Soviet era and entered the Soviet Navy in 1982 as one of three Slava-class guided missile cruisers. The 12,490-ton vessel was the largest Russian warship sunk in combat since World War II. The 510-crew missile cruiser was a symbol of Russia’s military might and led the naval assault on Ukraine.

According to the Russian Defense Ministry, a fire broke out on board after ammunition exploded, causing the ship to lose balance. Ukrainian military officials, however, said they attacked the Moskva with Ukrainian-made Neptune missiles, a weapon developed in response to Russia’s annexation of Crimea in 2014, which had increased the threat to the Ukrainian Navy in the Black Sea. The Black Sea Fleet’s flagship, the Moskva, sank for whatever reason. So why is the loss of a flagship so crucial to a navy? What impact will the loss of the guided-missile cruiser have on the outcome of the war?

What is a flagship, and why is it so important?

The flagship is the command ship of a naval fleet. Generally, ships with the highest command and control capabilities perform this task. The commander is also called the Officer in Tactical Command (OTC), and their headquarters are located on the flagship. The importance of flagships can be divided into tactical and psychological aspects. Since these ships have high-level command capabilities, their loss may weaken the fleet’s command and control capabilities and functions, even for a short period of time, which can cause problems in a high-intensity operation. Since the ships are considered the territory of the country, the loss of warships has a significant psychological impact on both the people and the sailors. The sinking of a fleet’s flagship can break the Navy’s will to fight because the loss of the ship is “very embarrassing.”

Russia will never forget the loss of Moskva

States cannot simply forget the loss of a warship. In 1974 Turkish forces successfully conducted an amphibious operation on the island of Cyprus under challenging conditions. On the other hand, during the Cyprus Peace Operation, Turkish naval forces lost the TCG Kocatepe destroyer to missile fire from Turkish Air Force fighter jets due to a lack of mutual operational coordination. The loss of Kocatepe is one of the first things that comes to mind when discussing the Cyprus Peace Operation in Turkey today.

Russia suffered a severe blow to its reputation when it lost its flagship Moskva, named after the capital, during an operation against a country like Ukraine that has a modest naval force. The national trauma caused by the sinking of the Moskva will not be forgotten for a long time.

How will the loss of Moskva affect the coastal defense of Ukraine?

According to Oleksiy Arestovych, an adviser to Ukrainian President Volodymyr Zelensky, the Moskva also has symbolic significance for Ukraine since it was involved in a famous exchange on Snake Island in February.

According to a purported audio exchange from late February, when the Russians approached the Ukrainian garrison on Snake Island in the Black Sea, a Russian officer declared: “This is a military warship. This is a warship of the Russian Navy. I suggest you lay down your weapons and surrender to avoid unnecessary bloodshed and casualties. If you do not, you will be bombed.”

Since the beginning of the invasion, the Russian Federation’s Black Sea Fleet has maintained control in the Black Sea because Ukraine lacks sufficient naval forces and coastal defense systems. (According to the Russian Naval Intelligence Service, the Neptune coastal missile defense systems have not yet reached initial operational capability.) Thus, the port of Odessa, through which 70 percent of Ukraine’s exports pass, has been kept closed. The Russian Amphibious Task Group is on constant standby off the Ukrainian coast, preventing Ukrainian Army brigades from being deployed for coastal defense.

Ukraine has acquired a significant missile capability if the Ukrainian claims are true and Neptune missiles hit the Moskva. The Neptune anti-ship system is equipped with cruise missiles that can reach a target up to 300 kilometers away. The locations of Russian surface units can easily be tracked using satellites, electronic surveillance, NATO AWACS and US Global Hawks, allowing the Neptune anti-ship cruise missiles to attack Russian ships from a great distance. The Russian Navy’s freedom of operations off Odessa will be limited due to the threat of Neptune cruise missiles. The Russians will not be able to conduct an amphibious operation against the Odessa coast without suffering a significant loss of warships.

Turkey will face a serious test

The sister ships of the sunken Moskva, the other Slava-class cruisers Varyag and Marshal Ustinov, are currently operating the eastern Mediterranean. If Russia designates one of these ships as the flagship of the Black Sea Fleet, it will require Turkey to allow the ship to transit the Turkish Straits. Turkey has closed the straits to warships of belligerent states under Article 19 of the Montreux Convention. Under this article, warships of belligerent states are allowed to transit the straits only to return to their home bases, but Marshal Ustinov is affiliated with the Northern Fleet, and Varyag is the flagship of the Pacific Fleet. Turkey, which has been praised by the United States, Ukraine, Russia and NATO for its implementation of the Montreux Convention, will face a serious test of that implementation if Russia requests the passage of the Varyag or the Marshal Ustinov.