Selçuk Bayraktar, the chief technical officer of Turkish unmanned aerial vehicle producer Baykar who is also the son-in-law of President Recep Tayyip Erdoğan, has filed a lawsuit against yet another journalist as well as a newspaper due to their reports about the company’s drone sales, according to a report by the Expression Interrupted project.

President Erdoğan’s son-in-law Selçuk Bayraktar sued the Yeni Yaşam newspaper and journalist Sedat Yılmaz, demanding TL 150,000 ($10,000) in damages, for two reports published by the daily in November 2021. The reports, written by Yılmaz, accused the Erdoğan family of acting like the “sales representatives” for the drones produced by the son-in-law’s company and involvement in “family-size war sales.” The reports also listed the names of the customers that purchased drones from Baykar.

Yılmaz claimed in his report that President Erdoğan was personally involved in the marketing of the Bayraktar TB2 unmanned combat aerial vehicles (UCAV) manufactured by his son-in-law’s company and mentions that a number of foreign countries purchased Bayraktar UCAVs after receiving assistance from Turkey. 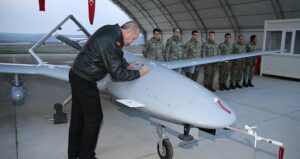 The journalist and the newspaper are accused of libel and insult as well as violating the personal rights of Bayraktar, with Bayraktar’s lawyers claiming that the reports are not within the limits of the freedom of the press.

The first hearing in the lawsuit is scheduled to take place on May 16 at an İstanbul court.

Bayraktar recently filed another lawsuit against journalist Şirin Payzın and Halk TV over her remarks about the sale of UAVs and UCAVs, seeking another TL 150,000 in damages.

Bayraktar is also the founding chairman of the Turkey Technology Team (T3) Foundation, which also sued journalist Çiğdem Toker over a news report she wrote in 2019. The court ordered Toker to pay the T3 Foundation TL 30,000 ($2,000) in damages. In her article Toker claimed that the İstanbul Municipality made large funds transfers to pro-government foundations, including the T3 Foundation, which is claimed to have received TL 41.3 million ($2.8 million).

Bayraktar’s TB2 unmanned aerial vehicles, which have a proven track record in conflicts in Libya, Syria and Nagorno-Karabakh, have also been deployed by Ukrainian forces against Russian troops since Moscow invaded Ukraine on Feb. 24.

Ukraine has had TB2 drones since 2019 and has purchased around 50 over the past three years.

Meanwhile, Morocco and Tunisia received their first delivery of Turkish drones, produced by the Baykar company, in September, as part of contracts that include military training. The international community has speculated for months about a similar Turkish arms deal with Ethiopia.

Photographs of missile fragments provided the first material evidence that Ethiopia used a Turkish drone in January in an attack that killed 58 civilians sheltering in a school.