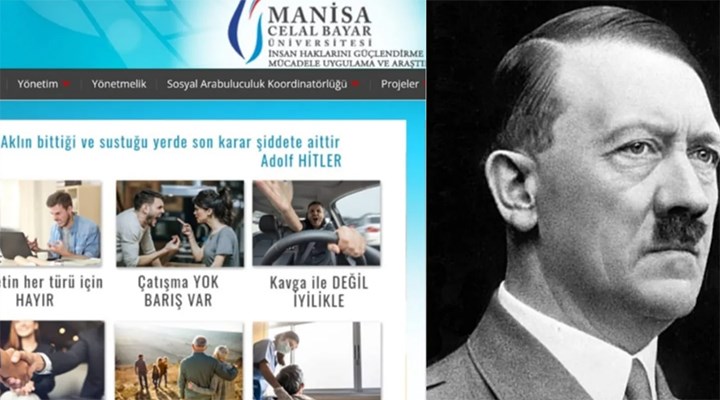 Hitler was quoted on the web page of the university’s Research Center for Strengthening Human Rights and Combating Violence as saying “Where the mind ends and is silent, the final decision belongs to violence,” according to Turkish media reports.

The quote, which was followed by phrases promoting peace such as “No to all forms of violence,” “There’s no conflict, only peace” and “Not by fighting, but with kindness” on the same web page, was removed after the reactions on social media.

“Fascist university! [They] shamelessly use an inhumane quotation by a Holocaust criminal!” Eren Keskin, a prominent human rights defender and lawyer in Turkey, tweeted on Tuesday. Keskin is the founder of the Legal Aid Bureau against Sexual Harassment and Rape in Custody and the co-chair of the Human Rights Association (İHD).

Prominent Turkish journalist Can Dündar, who lives in exile in Berlin, also said the university quoting Hitler on its website was “hard to believe.”

Hard to believe:
Manisa Celal Bayar University's "Research Center for Strengthening Human Rights and Combating Violence" quoted Hitler saying
“Where the mind ends and is silent, the final decision belongs to violence.”
The quote was removed from the site after the reactions. pic.twitter.com/YOvLzr5Fzr

An Austrian-born German politician who was the dictator of Germany from 1933 until his death in 1945, Hitler rose to power as the leader of the Nazi Party, becoming chancellor in 1933 and then assuming the title of Führer und Reichskanzler in 1934. He started World War II in Europe by invading Poland in 1939, was closely involved in military operations throughout the war and was central to the perpetration of the Holocaust, the genocide of 6 million Jews and millions of other victims.