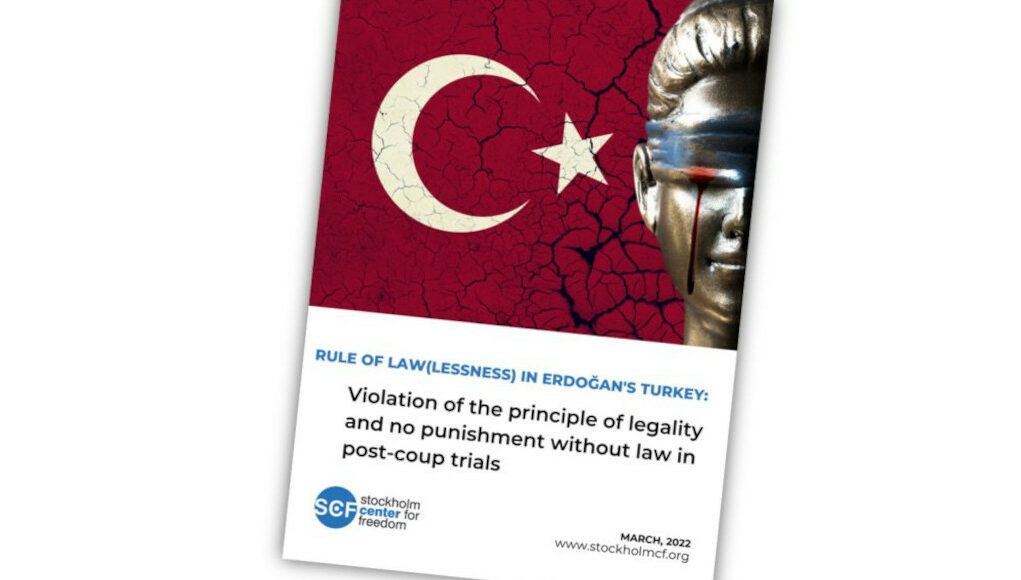 The Stockholm Center for Freedom (SCF) on Tuesday released its latest report, “Rule of law(lessness) in Erdoğan’s Turkey: Violation of the principle of legality and no punishment without law in post-coup trials,” a study that focuses on how the criminal prosecutions and trials conducted on charges of terrorism since a coup attempt in Turkey in 2016 are devoid of any legal grounds, the Stockholm Center for Freedom reported.

The principle of “legality” and “no punishment without law” aim at clearly ascertaining the conduct that constitutes a crime prior to its commission so that an individual knows which acts and omissions will make him criminally liable. Yet, in an attempt to demonstrate the connection of individuals to the Gülen movement, a faith-based group inspired by Turkish cleric Fethullah Gülen, Turkish judicial authorities have been using daily activities involving the exercise and enjoyment of fundamental rights as evidence of terrorist activity. These include having an account at a certain bank, sending children to private schools affiliated with the movement and using a specific messaging app.

“As confirmed by the European Court of Human Rights in its cases, this principle is an essential component of the rule of law that may not be derogated from even in times of emergency under Article 15 of the European Convention on Human Rights,” said Dr. Merve R. Kayıkcı, research director at the Stockholm Center for Freedom. “Unfortunately criminal prosecutions and trials in Turkey have been carried out in violation of this principle since 2016.”

The report discusses the legal elements required for the existence of an “armed terrorist organization” under Turkish law. It then considers the legal components for the existence of a membership relation between an individual and an armed terrorist organization. The report further elaborates on how the principle of legality and no punishment without law is violated in the post-2016 coup attempt trials.

“Turkey has the highest incarceration rate among the Council of Europe countries due to the unlawful criminal proceedings and trials. While the number of people who were put behind bars has dramatically increased, there has been a record rise in the number of prisons constructed in recent years in a sign of the Turkish government’s plans to continue its crackdown on critical groups in the country,” Dr. Kayıkcı said.