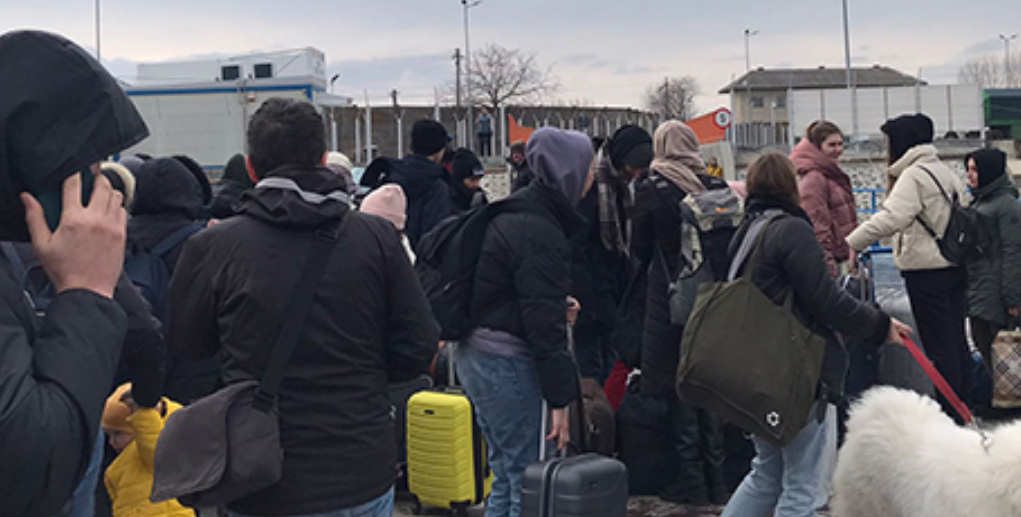 The Turkish government has begun to evacuate Turkish citizens stranded at Turkey’s embassy in Kyiv due to escalating fighting between Russian troops and the Ukrainian army, amid opposition criticism that Ankara should have acted sooner, local media reported on Friday.

The state-run Anadolu news agency on Friday said some 120 citizens who were sheltering at the embassy in Kyiv were taken to buses and were en route to Romania.

A report by the pro-government İhlas News Agency (İHA), however, said later on Friday that the buses had arrived at the Polish border.

The evacuation of Turkish citizens from Ukraine by land through Romania, Hungary, Slovakia, Poland, Moldova and Bulgaria could take up to two days, according to local media reports.

Speaking during a live program on NTV, Turkey’s Foreign Minister Mevlüt Çavuşoğlu said some 2,500 Turkish citizens had requested evacuation so far and that evacuation efforts would accelerate on Saturday.

Çavuşoğlu added that some 5,000 of the nearly 20,000 Turkish citizens in Ukraine, most of them college students, had already left the country.

Following the Russian assault, the Turkish Foreign Ministry on Thursday released an announcement on its website, advising Turks in Ukraine to stay in their houses or somewhere safe, to avoid traveling and to share their contact details with the ministry by e-mail, WhatsApp, or SMS text message to the e-mail address and phone number of the ministry, which is included in the notice.

The evacuation efforts come amid criticism by opposition politicians that Turkey’s ruling Justice and Development Party (AKP) had failed to evacuate Turkish citizens in Ukraine before the start of the war.

Engin Altay, a deputy group chairman from the main opposition Republican People’s Party (CHP), said during a speech in parliament that he wished Turkey’s Foreign Ministry had been able to warn some 15,000 Turks, who were in Ukraine when the war started, to leave the country days earlier, as many other governments did.

Also speaking in parliament on Thursday, Meral Danış Beştaş, parliamentary group deputy chair of the pro-Kurdish Peoples’ Democratic Party (HDP), said some Turkish students stranded in Ukraine told her they were unable to talk to government authorities about their situation.

“There are still numerous people in here who haven’t been contacted by the consulate. This causes panic and alarm among the people,” a college student in Kyiv told the Birgün daily. “We demand an immediate evacuation.”

Several Western capitals including Washington, London and Oslo advised their citizens to leave Ukraine before the Russian invasion amid escalating tensions between Moscow and NATO. Ankara, meanwhile, issued two warnings on Feb. 12 and 22 urging its citizens to stay away from eastern Ukraine.

Meanwhile, Meral Akşener, leader of the nationalist opposition İYİ (Good) Party, on Friday slammed Erdoğan and his government, calling them “hypocrites” in a tweet she posted over Turkey’s move to abstain in a vote at the Council of Europe to suspend Russia from the body.

A Reuters analysis on Friday said that Erdoğan’s strong economic and political relations with both Moscow and Kyiv that have developed in recent years left Turkey facing a delicate balancing act in its response to the Russian invasion of Ukraine.

Ankara cannot afford to fall out with Russia economically because of tourism revenue, gas supply, grain and other agricultural trade, and a nuclear power project, Reuters said, adding that growing tourism, trade and defense ties with Ukraine were also part of the calculations for the Turkish president.

The Russian invasion of Ukraine began early Thursday with a series of missile strikes on cities and military bases, and then quickly followed with a multi-pronged ground assault that rolled troops in from several areas in the east; from the southern region of Crimea, which Russia annexed in 2014; and from Belarus to the north.