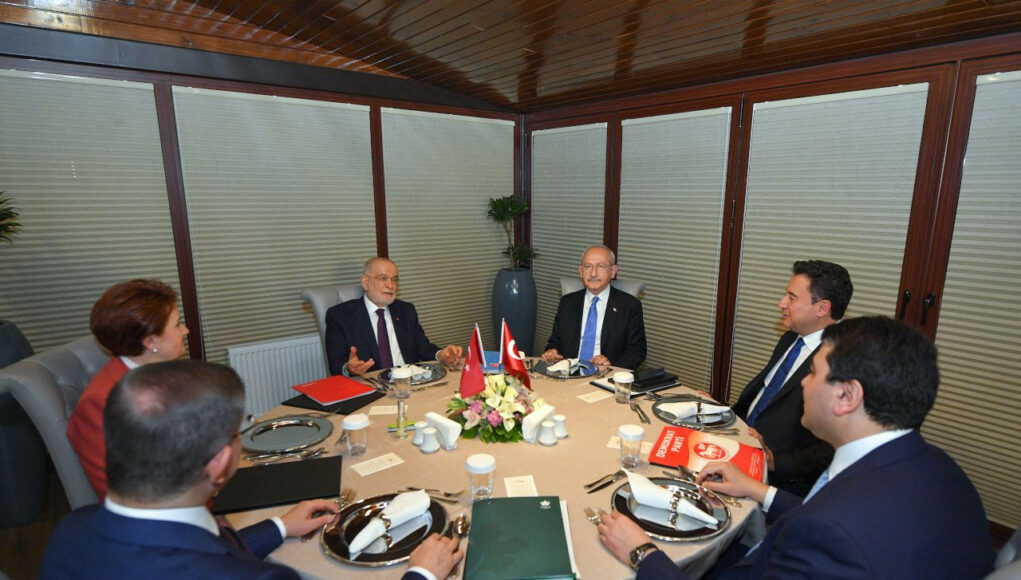 The first meeting of the leaders of six Turkish opposition parties to strategize about the future of the country’s system of governance has received mixed reactions from Turks amid criticism that not inviting the pro-Kurdish Peoples’ Democratic Party (HDP) to the meeting meant ignoring Turkey’s Kurdish population.

Davutoğlu and Babacan were co-founders of President Recep Tayyip Erdoğan’s ruling Justice and Development Party (AKP) and served in top positions but broke away to form their own parties in protest of Erdoğan’s policies.

Although the leaders had previously conducted joint meetings, Saturday’s was their first all together.

Turkey has begun a countdown to its next presidential and parliamentary elections slated for the summer of 2023, against the backdrop of an economic crisis.

The government is struggling to steer the country through the worst economic crisis in Erdoğan’s nearly 20-year rule, marked by soaring inflation and a plunging currency that lost 44 percent of its value against the US dollar last year in a record-breaking low.

Saying that Turkey was experiencing “the deepest political and economic crisis” of its history in a statement after the meeting Saturday night, the leaders blamed it on the executive presidential system and added that their joint goal was to transform Turkey’s governance to a “strengthened parliamentary system.”

The leaders said they agreed on a roadmap to build “a strong, liberal, democratic and fair system in which the separation of powers is established with an effective and participatory legislature, a transparent and accountable administration and an impartial and independent judiciary.”

The full text of the opposition parties’ agreement is set to be published on Feb. 28.

The meeting caused mixed reactions among the public, with some saying it was a first step for strong unity among the parties that could change the country’s future for the better, and others arguing that it wasn’t a big enough move to get excited about.

The leaders also drew criticism due to the fact that the pro-Kurdish HDP, the second-largest opposition party in parliament, wasn’t at the meeting.

HDP Co-chair Mithat Sancar said in a speech on Saturday that the leaders should explain what kind of a future their vision — which ignores the HDP and doesn’t include negotiating with them — promises for Turkey.

“It is essential to be in dialogue with the HDP and seek consensus. Whoever makes the HDP an enemy is no different from the AKP and the MHP,” Sancar said, referring to the ruling AKP and its far-right ally, the Nationalist Movement Party (MHP).

In June Turkey’s Constitutional Court accepted an indictment seeking the HDP’s closure. The HDP is accused in the indictment of links to the outlawed Kurdistan Workers’ Party (PKK), listed as a terrorist organization by Turkey, the US and the EU, and of posing a threat to the “indivisible integrity of the state.”

Erdoğan and his AKP have long portrayed the HDP as the political front of the PKK. The party denies links to PKK and says it is working to achieve a peaceful solution to Turkey’s Kurdish problem and is only coming under attack because of its strong opposition to Erdoğan’s 19-year rule.

After more than 11 years as Turkey’s prime minister, Erdoğan was elected president in 2014. At the time, the position was primarily ceremonial. But in 2017, Turkish voters approved an executive presidential system, greatly expanding Erdoğan’s powers at the expense of those of the prime minister and parliament. Erdoğan was re-elected the following year. Critics call the system “one-man rule.”

Although the opposition leaders didn’t mention Erdoğan by name in Saturday’s meeting, their clear goal is to find a way to work together to unseat him.