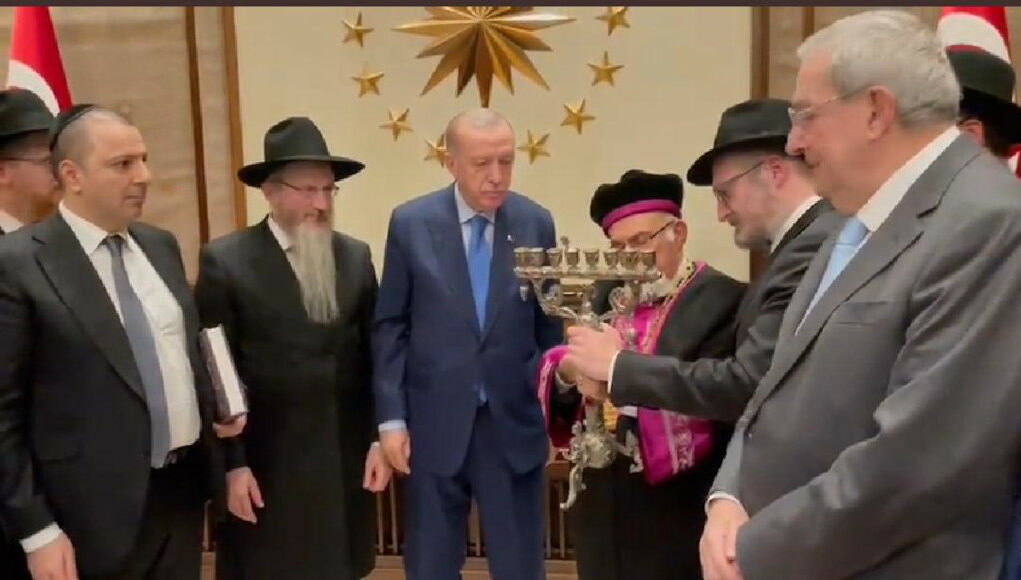 A statement by Turkish President Recep Tayyip Erdoğan on a planned visit to Turkey by Israeli President Isaac Herzog this month surprised many around the world.

During his two-decade-long time in office, Erdoğan’s Israel policies have shifted dramatically, taking full advantage of Turkey’s “enemy Israel” or “friend Israel” policies as and when either is needed.

But this time Erdoğan finds himself in a weaker and more vulnerable position as Turkey’s reserves are no longer as abundant, the country’s economy has been in a recession since 2018 and the Turkish leader now requires Israel’s support for energy deals in the Mediterranean.

Thanks to Erdoğan then-Israeli president Shimon Peres became the first Israeli president to speak before the legislature of a Muslim country when he addressed the Turkish parliament in 2007.

But that same Erdoğan told Peres during a panel discussion on Gaza at the World Economic Forum in January 2009 that “when it comes to killing, you [Peres] know well how to kill.”

He also walked off the stage following an angry exchange with the Israeli president at the same event.

The strategic cooperation between the two countries was interrupted for a period of six years following the Gaza flotilla raid, in which Israeli commandos killed nine Turkish activists — one of whom was a dual Turkish-US citizen — on board the Mavi Marmara, part of an aid flotilla attempting to breach the blockade of Gaza on May 31, 2010.

Following the incident Israel received harsh criticism from Erdoğan, who in July 2014 stated that Israel had “surpassed Hitler in barbarism” through its attacks on Gaza.

Two years later Turkey and Israel signed a deal to normalize diplomatic relations and agreed to work on an energy deal that would facilitate Israel’s natural gas exports to Europe. They also discussed the re-establishment of conditions for humanitarian aid to Gaza.

Israel refused to consider lifting the blockade on Gaza and only issued an official apology some three years later.

Turkey’s efforts at rapprochement were disrupted by the Palestinian issue in May 2018 after the US government recognized Jerusalem as the capital of Israel and moved its embassy there from Tel Aviv. The killing of Palestinians by Israeli soldiers during the “Great March of Return” protests at the Gaza border further added to tensions.

Turkey and Israel expelled each other’s senior diplomats on May 15, 2018, in a dispute over the killing by Israeli forces of Palestinians, Reuters reported. Turkish officials humiliated the Israeli ambassador with a security check in front of the press at the airport in Istanbul, supposedly to demonstrate their anger at the killing of 61 Palestinians in a clash with Israeli forces on the Gaza border.

Erdoğan’s ruling Justice and Development Party (AKP) has had a tumultuous relationship with the Israeli government, but Ankara needs Israel’s support now more than ever.

Despite Erdoğan’s populist Islamist rhetoric, Turkey has always been an important place for Jewish people.

Members of the Alliance of Rabbis in the Islamic States (ARIS), representing Iran, Egypt, Tunisia, Albania, Kosovo, the United Arab Emirates, Azerbaijan, the Turkish Republic of Northern Cyprus, Kazakhstan, Russia and Turkey, gathered in İstanbul in December of last year.

Erdoğan also unexpectedly hosted these rabbis at his palace and told them he was ready to renew dialogue with Herzog and rebuild local synagogues and that he condemns the Holocaust.

The rabbis presented Erdoğan with a silver menorah as well as saying a prayer for his wellbeing. The Turkish leader assured the rabbis that despite differences with Israel over its policies toward Palestinians, saying, “Our relations with Israel in the fields of economy, trade and tourism are progressing. … Turkey-Israel relations are vital for the security and stability of the region. We are ready to improve our relations,” the Hürriyet newspaper reported.

President Erdoğan, who was a fierce critic of former President Peres and former Prime Minister Benjamin Netanyahu, has had three friendly phone conversations with Herzog since July and also had a chat with current Prime Minister Naftali Bennett following the release of an Israeli couple who were arrested in İstanbul on suspicion of spying after having taken photos of Erdoğan’s residence in İstanbul, in November of last year.

Turkish Foreign Minister Mevlüt Çavuşoğlu also had a rare telephone conversation with his Israeli counterpart, Yair Lapid, the first such communication in 13 years. Turkish officials, however, did not release any details on the content of the call, and Israeli media reported that Çavuşoğlu enquired about Lapid’s health after he had contracted COVID.

Erdoğan announced during an interview on NTV last week that Herzog would visit Turkey before mid-February. The Israeli presidency has not yet confirmed the visit.

Turkey and Israel may appoint ambassadors before the visit since they didn’t downgrade their diplomatic relations but rather merely recalled their senior diplomats.

If the visit occurs, it is likely that Erdoğan will try to convince Israel to transport its Mediterranean gas to Europe through Turkey.

Israel, Greece and Cyprus in January 2020 signed the Eastern Mediterranean Pipeline Project (EastMed), a 1,900-kilometer pipeline running from Israel to Italy via Cyprus and Greece. Turkey opposes the project, and Washington recently decided to withdraw support for the Israeli-Greek EastMed pipeline.

Azerbaijan, a Turkic country, is trying to facilitate peace between Turkey and Israel since Baku has enjoyed a close relationship with Israel since 1993, and Turkish and Israeli drones were used against Armenian forces in Nagorno-Karabakh in 2020.

Azerbaijani President Ilham Aliyev’s foreign policy adviser Hikmet Hajiyev said in April 2021 that Baku was prepared to host a trilateral summit with Turkey and Israel, according to The Jerusalem Post. “Turkey is a sister country of Azerbaijan and Israel is our strategic partner. We want our friends to be friends with each other. If the sides agree to such an initiative, then Azerbaijan will always welcome them,” Hajiyev said.

Israel’s increasing presence in the Arab world is also putting pressure on Turkey to change its policy toward Tel Aviv. Israel has unexpectedly normalized its relations with four Arab states — Bahrain, the United Arab Emirates, Sudan and Morocco — since 2020 under the Abraham Accords.

Ankara is presumably under pressure to establish a close relationship with Israel since its ally Qatar is also warming up to Israel.

Israel requests that Erdoğan limit Hamas’ activities in Turkey in order to normalize relations but still prefers Ankara over Iran to communicate with Hamas leaders.

Despite deep political tensions, Turkey’s trade volume with Israel has increased since Erdoğan came to power in 2003. Turkish media has always found it curious that Erdoğan has had several meetings with Jewish lobbies in New York since 2009 while simultaneously criticizing Israel’s Palestinian policy.

Turkey’s Erdoğan, who controls Turkey with an iron fist, has fallen on hard times economically and politically. He is likely to attempt everything in his power to please the state of Israel and Jewish lobbying groups as part of his bid to maintain his grip on the levers of power in Turkey.