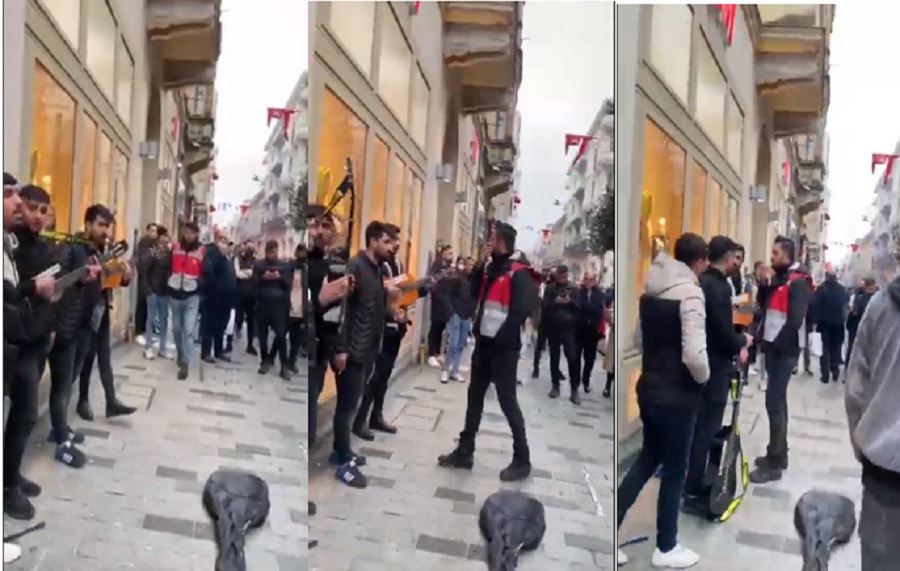 A large number of politicians, singers and social media users have shared videos of their Kurdish song performances and those of Kurdish singers in protest after police officers recently prevented four young street performers from singing in Kurdish in İstanbul’s popular İstiklal Street.

In a video posted on Twitter over the weekend, the group is seen performing a Kurdish song on İstiklal Street when they are approached by police officers who warn them to stop singing. When the music suddenly stops, the audience is heard urging them to continue.

According to a report by the Mezopotamya news agency on Monday, the singers were later taken into custody where they were subjected to mistreatment. They were cursed at by police officers who seized their instruments and the money they earned by singing in the streets, and made them pay to get their instruments back, Mezopotamya said.

Referring to the universality of music, the MP said the songs and melodies of the Kurdish people would continue to be sung across Turkey, underlining that language was the most important part of human existence.

“Our youngsters who make music in Kurdish aren’t alone,” Hüda Kaya, another HDP lawmaker, tweeted on Monday, calling on people to sing and listen to Kurdish songs together with them on İstiklal Street at 3 p.m. on Tuesday.

“[You say] ‘sing in any language but not Kurdish.’ We are tired of your desperate fears,” Doğan also tweeted.

“This one’s from me,” Iraqi musician Aysel Borak said in a tweet in which she posted her performance of a Kurdish song, using the hashtag #KürtçeMüzikSusmayacak (Kurdish music won’t be silent).

A Twitter user shared a song by Kurdish musician and singer Rewşan Çeliker, saying, “I will, we will, express our fight, love, dreams and thoughts in any language and note [we want].”

A number of social media users, including a Twitter user named Duygusalogist, shared videos of their performances of Kurdish songs.

Kurds in Turkey are often pressured not to speak their native language. Authorities frequently claim that people speaking in Kurdish are actually chanting slogans in support of the outlawed Kurdistan Workers’ Party (PKK), which has been leading an armed insurgency against Turkey’s security forces since the ’80s in a campaign that has claimed the lives of some 40,000 people.

Turkish authorities have increasingly restricted the use of Kurdish in recent years. Hate crimes against Kurds for speaking their language have also increased.

Prohibitions against the use of Kurdish in Turkey go back many years. Kurdish language, clothing, folklore, and names had been banned since 1937. The words “Kurds,” “Kurdistan” and “Kurdish” were among those officially prohibited. After a military coup in 1980, speaking Kurdish was officially forbidden even in private life.