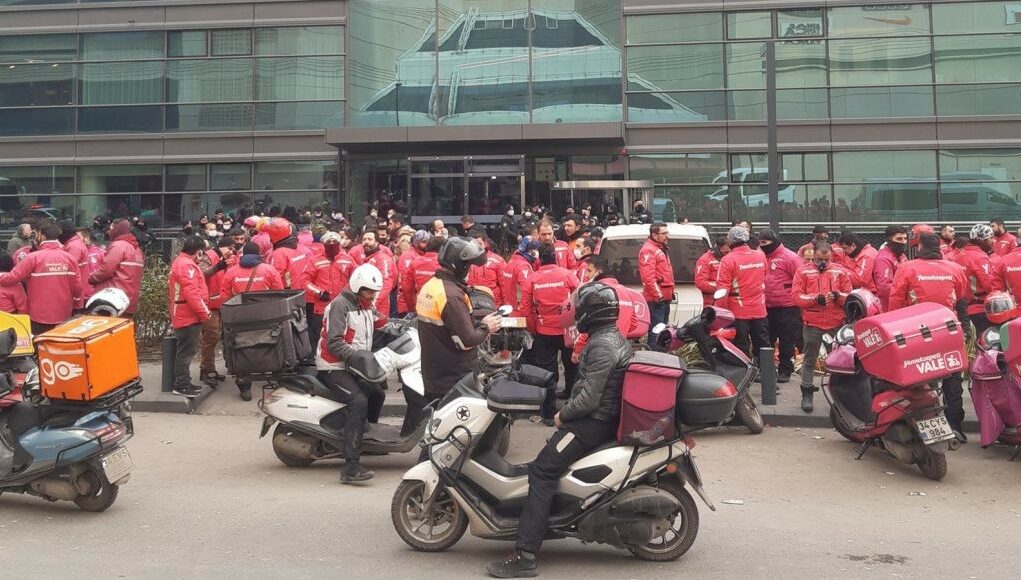 Delivery workers from the platforms began protests after thousands of their colleagues at Trendyol Express, the distributor for Turkey’s largest e-commerce platform Trendyol, recently secured a 38.8 percent raise after a three-day delivery strike against a proposed 11 percent pay increase.

The success of the Trendyol strike has inspired delivery workers throughout the country, with those at Yemeksepeti; Banabi, a grocery shopping feature at Yemeksepeti; HepsiJET, the distributor of e-commerce site Hepsiburada; and Scotty, a ride-sharing, food delivery and package delivery app also starting to stage protests.

According to media reports, delivery workers at Yemeksepeti and Banabi rejected a proposed 32.7 percent raise and on Tuesday started a protest in front of Yemeksepeti headquarters in İstanbul, with representatives from the All Transport Workers’ Union (TÜMTİS) demanding an increase of 50 percent.

Although the protestors didn’t stop work altogether, those in Eskişehir, İzmir and İstanbul provinces paused deliveries for a brief period, local media said.

Speaking during the protest, Ersin Türkmen, a branch manager at TÜMTİS, said Yemeksepeti still deems it proper to give its workers low wages despite having doubled its profits during the pandemic. Türkmen added that the company didn’t recognize the workers’ right to unionize and forced them to work without insurance.

Delivery workers at Scotty yesterday stopped work for a brief period, demanding a monthly wage of TL 12,500 ($935), which corresponds to a 40 percent raise, local media said. The workers announced later on that they had paused the protests until they came up with a new plan for a strike, due to the company’s increasing pressure on them to terminate their contracts.

Workers at HepsiJet, who rejected a proposed 28 percent pay raise, have also been staging protests for higher wages, according to reports.

The protests by the delivery workers at Turkey’s popular e-commerce platforms come amid sky-high inflation in the country.

Official inflation in Turkey, year on year, currently stands at 36.8 percent, though many experts believe the real figure is far higher. Inflation has been particularly acutely felt in housing prices, food and utilities.