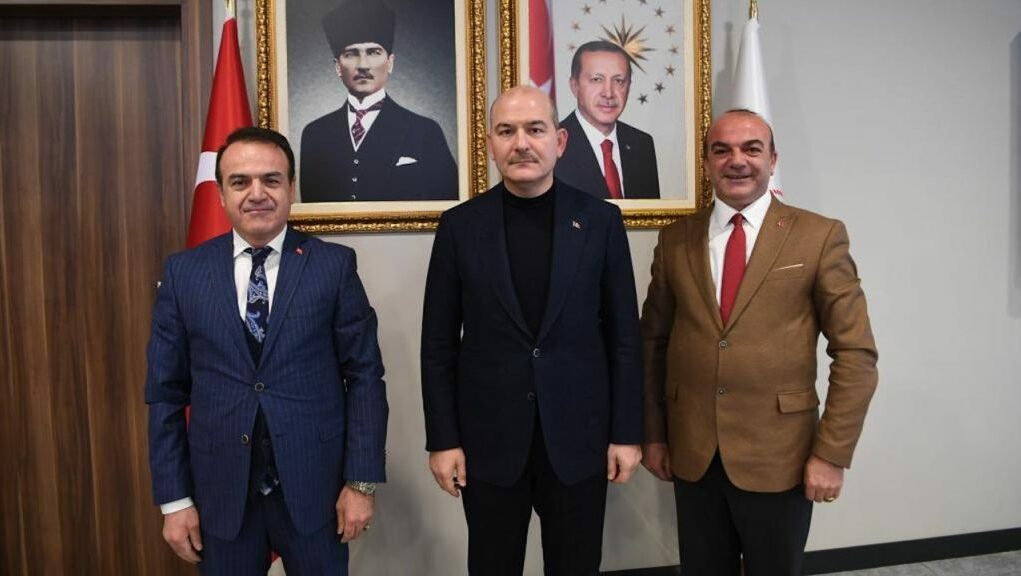 Two mayors from the ruling Justice and Development Party (AKP) who were recently convicted of rigging tenders recently paid a visit to Turkish Interior Minister Süleyman Soylu in his office, local media reported on Wednesday.

The visit by Uludere district mayor Sait Ürek and Hilal town mayor Cafer Benek from southeastern Şırnak province was revealed after Ürek tweeted a photo on Monday of the three on Twitter, thanking Soylu for receiving them in his office.

As part of a case launched against 32 suspects on charges that include bribery and tender-rigging in 2013, the Şırnak 1st High Criminal Court sentenced Ürek and Benek to prison for tender-rigging on Jan. 6.

Although the appeals process is under way, the court had reportedly requested that the Interior Ministry remove Ürek and Benek from office immediately and not wait for their conviction to be upheld on appeal.

Local media reports said it was “meaningful” for Ürek and Benek to pay a visit to Soylu and for Soylu to receive them soon after the court’s request to the ministry.

“This is not the first time that Soylu took a photo with figures involved in crime,” media reports said, since the minister has frequently come to public attention, especially since early 2021, with his alleged links to a mafia leader and a US money-laundering suspect, among other criminal figures.

Sezgin Baran Korkmaz, who was involved in a money-laundering scheme in the US and accused of involvement in large-scale corruption in Turkey, was arrested in Austria on June 19 on a US warrant. It turned out that Korkmaz had also defrauded the US Treasury and illegally transferred tens of millions of dollars to Turkey.

Soylu’s relationship with Korkmaz came under growing scrutiny as Sedat Peker, the head of one of Turkey’s most powerful mafia groups who made shocking revelations in 2021 about state-mafia relations, drug trafficking and murders implicating state officials and their family members, alleged that it was Soylu who helped Korkmaz flee abroad.

Peker has also claimed that it was connections to his family that had helped Soylu rise through the ranks of the right-wing True Path Party (DYP) before he joined the ruling AKP in 2012 at the invitation of then-prime minister and current President Recep Tayyip Erdoğan. He further alleged that Soylu helped him avoid prosecution by notifying him that an investigation into him was being prepared before he fled Turkey in early 2020.

Among other such figures with whom Soylu has taken photos are Murat Alp, a participant in a racist attack in 2017 on the funeral of Hatun Tuğluk – mother of jailed Kurdish politician Aysel Tuğluk; Hasan Sel, who together with his brother Hüseyin Sel physically attacked a pregnant woman and her husband in 2019; and Durak Uygun, father of Ümitcan Uygun, the main suspect in a murder trial.