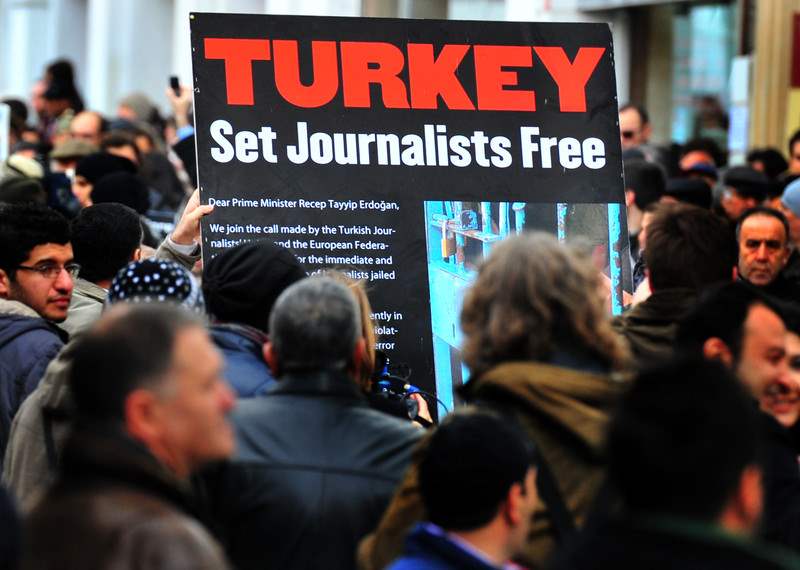 Although the number of journalists jailed in Turkey’s prisons has begun to drop, journalists continued to face legal action for doing their job in 2021, with an average of 70 journalists appearing in court in over 30 cases every month, according to a report by the Expression Interrupted project.

The report, titled, “Freedom of Expression and the Press Agenda,” is based on data obtained from trials and media monitoring work carried out by Expression Interrupted.

According to the report, a total of 203 journalists, including seven foreign nationals, appeared in courtrooms across Turkey in 98 cases in the last quarter of 2021, which increased the average number of journalists appearing in court every month last year to 70.

Among those journalists, 18 were sentenced to 24 years, five months in prison in total and were ordered to pay fines totaling TL 22,660 ($1,685), the report said, adding that 36 were acquitted, decreasing the number of journalists behind bars to 58 at the end of 2021.

Prosecutors launched 10 new trials against 17 journalists in October, November and December last year, while 16 journalists faced new investigations and 13 were taken into custody in the same period, the report further said.

The report also found that reporters, especially those covering demonstrations, faced at least 20 incidents of physical attack, prohibition and/or threat across the country in the period covered, targeted by police officers or soldiers in 13 and by civilian attackers in at least five of the incidents.

According to the report, Turkey’s broadcasting watchdog, the Radio and Television Supreme Council (RTÜK), fined many pro-opposition TV stations due to their coverage critical of the ruling Justice and Development Party (AKP) in the last three months of 2021, including a fine imposed on Halk TV in the amount of TL 215,619 ($16,032).

Turkey, which is among the top jailers of journalists in the world, ranked 153rd out of 180 countries in the Reporters Without Borders (RSF) 2021 World Press Freedom Index announced in April.