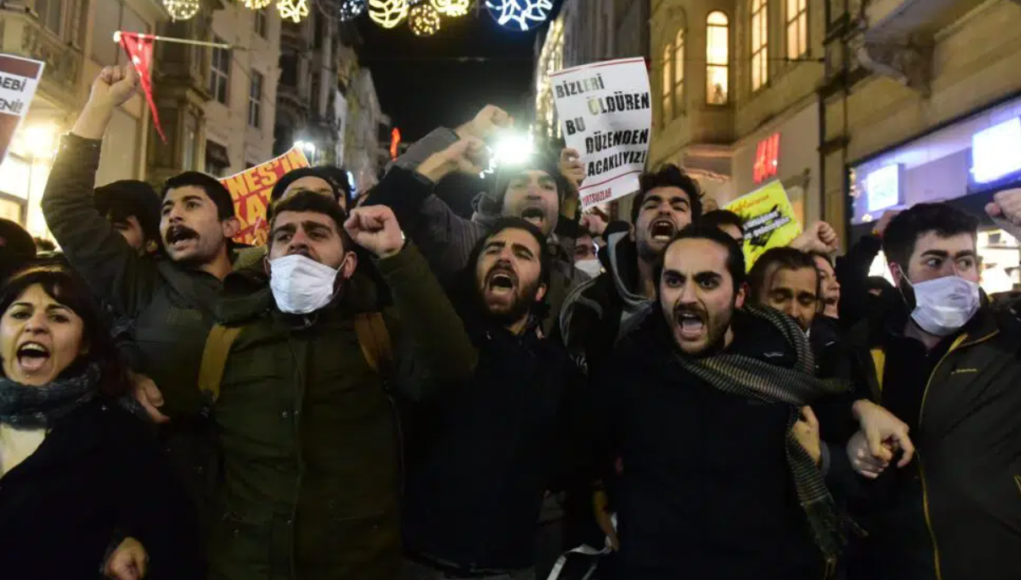 Eighty-three protestors, including two journalists, were detained after police intervened in protests that erupted following the death of Enes Kara, a 20-year-old medical student who openly denounced the pressure and anxiety he faced at his Islamic cult-run student apartment before ending his life, local media reported on Friday.

The police intervened in protests by students who gathered in İstanbul’s Taksim Square to demonstrate against government policies that force students in Turkey to stay at religious community apartments, due to a lack of proper financial support.

According to Turkish media reports, the protestors chanted the slogan “Enes Kara is our conscience” and underlined in their public statement, which was frequently interrupted by the police, that Kara was “driven to suicide” due to the policies of the ruling Justice and Development Party (AKP).

President Recep Tayyip Erdoğan and his AKP government, which has its roots in political Islam, have long been accused by critics of seeking to erode the country’s secular principles.

Citing data from the Contemporary Lawyers Association (ÇHD), local media said that 83 people were detained in the protests and were taken to the İstanbul Police Department after undergoing medical checks.

Responding to the development on Twitter, main opposition Republican People’s Party (CHP) deputy group chairman Özgür Özel said: “The ruling party, which cannot even tolerate the voices of young people, prefers to silence them instead of listening to them. … The youngsters in detention should be released immediately!”

Kara, a medical faculty student at Fırat University in the eastern Turkish province of Elazığ, allegedly died by suicide by throwing himself off the roof of his apartment building on Jan. 10, after posting a video on social media in which he complained about the oppressive methods used by the managers of the apartment where he was staying due to pressure from his parents.

Kara, a self-described atheist, said he had concerns for the future and that he had “lost [his] entire joy for life and enthusiasm” in the apartment, where he claimed he was “forced to” perform daily prayers, cook and clean and attend religious community classes.

Days after the student’s death, a local court in the southern province of Hatay banned access to news reports about the incident upon the request of his father Mehmet Kara.

Opposition politicians blamed the ruling AKP, which is known to have close ties to Islamic cults that have been on the rise in Turkey in recent years, for Kara’s death, with some urging the government to shut down all residences linked to Islamic cults.

The AKP’s relations with religious cults have been a subject of debate in Turkey, especially after an attempted coup on July 15, 2016, for which the government blamed the Gülen movement, inspired by Islamic preacher Fethullah Gülen. The movement strongly denies any involvement in the failed putsch.

The AKP government is criticized for not distancing itself from Islamist groups and letting cults fill the gap in state institutions that opened after widespread dismissals of alleged members of the Gülen movement.