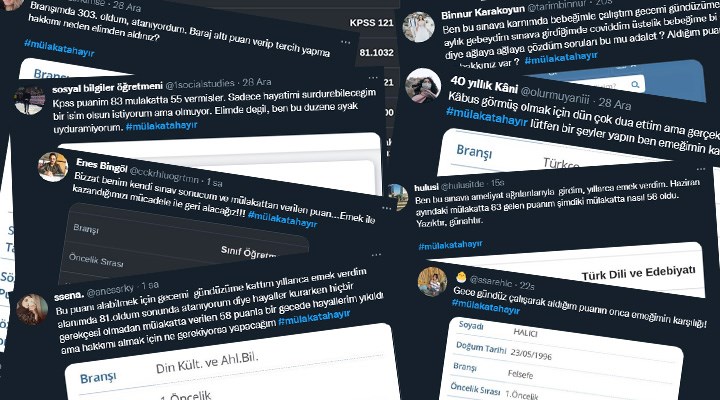 Turkey’s ruling Justice and Development Party (AKP) has been accused of favoritism in the appointment of public school teachers, with thousands of candidates saying they were eliminated in oral exams despite passing the written exam with high scores, local media reported on Wednesday.

Since 2016 teachers in Turkey have been expected to score over 50 points in the written State Personnel Examination (KPSS) and then over 60 points in an oral exam to be appointed as a teachers in public schools.

The results of the oral exams conducted Nov. 12-27 for the appointment of 15,000 contract teachers were announced on Dec. 27.

Thousands of candidates took to Twitter afterward, asking the Education Ministry why they were given points below 60 in the oral exam and denied appointments despite getting scores of 80 or 90 in the KPSS, accusing the AKP government of favoritism and seeking to place their own people in the positions.

A candidate named Sultan Fidan, who scored 87.8 in the KPSS, said on Tuesday: “I came in first in my field [biology] in the KPSS, for which I had worked for two years, burning the midnight oil. I am currently doing my Ph.D. in the field. By what criteria did you eliminate [me]?” Fidan’s tweet was addressed to President Recep Tayyip Erdoğan and the Education Ministry.

Commenting on the post, İstanbul Mayor Ekrem İmamoğlu from Turkey’s main opposition Republican People’s Party (CHP) said in a tweet: “Dear Sultan, what happened to you is happening to thousands of our young people, and it makes me very sad. If there is a job in [the municipality] related to your area of expertise, be sure to apply for it.”

CHP leader Kılıçdaroğlu also voiced support for the candidates who were denied appointments as teachers despite their high KPSS scores.

Reposting a tweet by Sare Halıcı, a candidate for philosophy teacher who scored 92.7 in the KPSS and was given 58 points in the oral exam, Kılıçdaroğlu said on Tuesday: “I continue to meet with young people who have been treated unfairly. It’s a long night… I will be dealing with only this matter tomorrow. I’ll inform the public about the steps I will take.”

The CHP leader on Wednesday met with some candidates whose hopes of state employment were dashed due to low grades in the oral exam and helped them make their voices heard in a statement to the press, saying it would force Erdoğan stop turning a deaf ear to the issue.

Kılıçdaroğlu also spoke to reporters, vowing not to let the government violate the candidates’ rights and to abolish the “the problem of oral exams” if his CHP comes to power after the next elections in June 2023.

“We owe them [the candidates] an apology. I have not been able to get through to the authorities, the [education] minister, since morning. … Who has the right to do this to these people? We all must object,” he added.