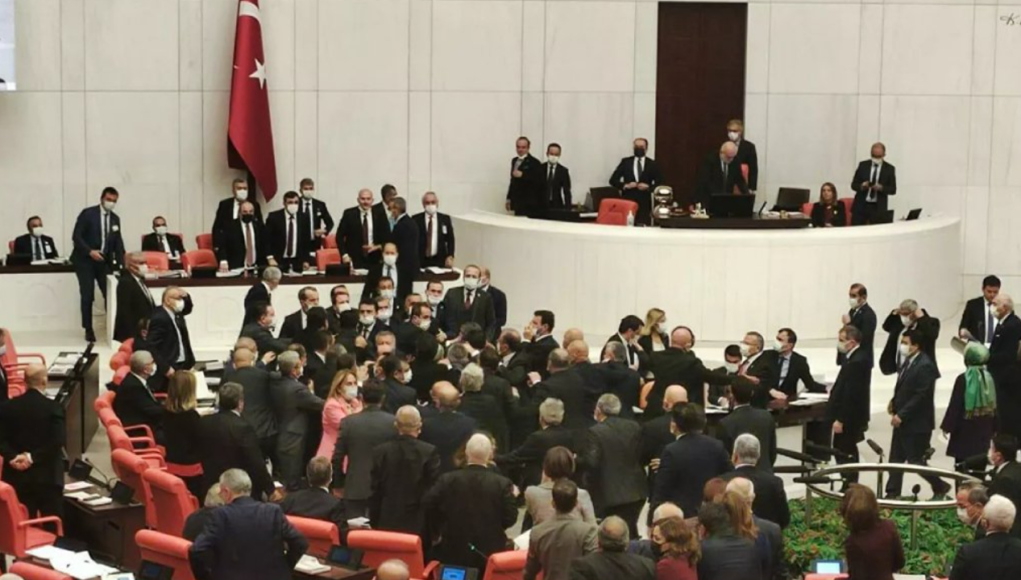 “A photo of you boarding this plane surfaced, and you said in a statement that there were no other planes to use. [If that was the case,] why didn’t you ask the president for one?” Republican People’s Party (CHP) MP Erkan Aydın said during a speech in parliament, addressing Soylu.

The minister then shouted insults at Aydın, accusing him of being a “fraud,” to which the deputy replied, “Right back at you.”

After the exchange between the two, Soylu also had a quarrel with CHP Deputy Chairman Veli Ağbaba and CHP Deputy Group Chairman Özgür Özel. A brawl broke out as lawmakers from the ruling Justice and Development Party (AKP) advanced on Özel, local media reports said.

Korkmaz, who was involved in a money-laundering scheme in the US and accused of involvement in large-scale corruption in Turkey, was arrested in Austria on June 19 on a US warrant. It turned out that Korkmaz had also defrauded the US Treasury and illegally transferred tens of millions of dollars to Turkey.

Soylu’s relationship with Korkmaz came under growing scrutiny as Sedat Peker, the head of one of Turkey’s most powerful mafia groups who made shocking revelations earlier this year about state-mafia relations, drug trafficking and murders implicating state officials and their family members, alleged that it was Soylu who helped Korkmaz flee abroad.

In late June the Turkish Interior Ministry confirmed that Soylu in 2017 used a plane belonging to Borajet, owned by Korkmaz, who fled Turkey in December 2020.

The statement, which came in response to a news report involving claims against Soylu, argued that the rental deal for the plane was in fact struck with an aviation company called Söğüt Havacılık, but since the company “ran out of planes,” it had contracted for outsourcing from Borajet.

“It’s common knowledge that when a plane or vehicle rental company doesn’t have a plane at their immediate disposal, they secure rental services from another company in order to meet their customers’ needs,” the ministry said.

According to the statement, Soylu had chosen not to use the government’s own planes and helicopters during the 2017 election campaign “due to electoral prohibitions and political ethics,” although he was authorized to do so.

Peker has also claimed that it was connections to his family that had helped Soylu rise through the ranks of the right-wing True Path Party (DYP) before he joined the ruling AKP in 2012 at the invitation of then-prime minister and current President Recep Tayyip Erdoğan. He further alleged that Soylu helped him avoid prosecution by notifying him that an investigation into him was being prepared before he fled Turkey in early 2020.