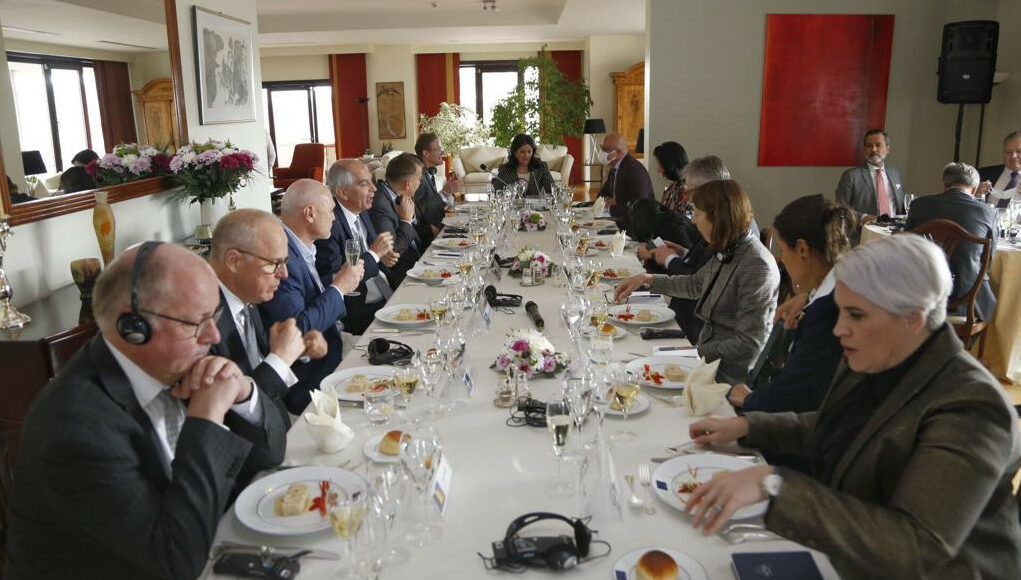 Pervin Buldan, co-chairperson of the pro-Kurdish Peoples’ Democratic Party (HDP), met with the ambassadors of European Union member countries at a lunch hosted in Ankara on Thursday by Nikolaus Meyer-Landrut, head of the EU delegation to Turkey, according to a statement from the HDP.

Buldan was accompanied by Hişyar Özsoy, co-spokesperson for the HDP’s Foreign Affairs Committee.

Co-Chair Pervin Buldan met with the ambassadors of EU countries at a lunch hosted by Nikolaus Meyer-Landrut, head of EU delegation to Turkey and discussed the recent developments including the closure & Kobanî case against HDP, the isolation in İmralı and ECHR's Demirtaş ruling. pic.twitter.com/yrwKU7Wu9F

Buldan briefed the envoys on the HDP’s views on Turkey’s ongoing political and economic crises and the 2023 general and presidential elections, according to the statement.

She expressed her views on Turkey’s failure to comply with a European Court of Human Rights (ECtHR) ruling on Selahattin Demirtaş, the alleged enforced isolation of a prisoner on İmralı Island and a closure case against the HDP, according to the statement.

Demirtaş was co-chairperson of the HDP when he was arrested in November 2016. He has been behind bars since then despite a ECtHR ruling in November 2018 that Demirtaş’s pre-trial detention was political and ordering his release. Turkish courts refused to implement the ruling, and a regional appeals court in Turkey subsequently upheld a prison sentence handed down to Demirtaş for disseminating terrorist propaganda.

Buldan also brought up İmralı Island off the coast of İstanbul, where Abdullah Öcalan, the leader of the outlawed Kurdistan Workers’ Party (PKK), is jailed. The HDP argues that the ruling Justice and Development Party (AKP) is keeping him in isolation.

During the meeting, Buldan answered many questions from the ambassadors, the statement said, adding that Buldan stressed that the HDP is standing strong against pressure and will continue to be a major actor in the Turkish political arena.

In June Turkey’s Constitutional Court accepted an indictment seeking the HDP’s closure. The HDP is accused in the indictment of links to the PKK, listed as a terrorist organization by Turkey, the US and the EU, and of posing a threat to the “indivisible integrity of the state.

President Recep Tayyip Erdoğan and his ruling AKP have long portrayed the HDP as the political front of the PKK. The party denies links to PKK and says it is working to achieve a peaceful solution to Turkey’s Kurdish problem and is only coming under attack because of its strong opposition to Erdoğan’s 18-year rule.