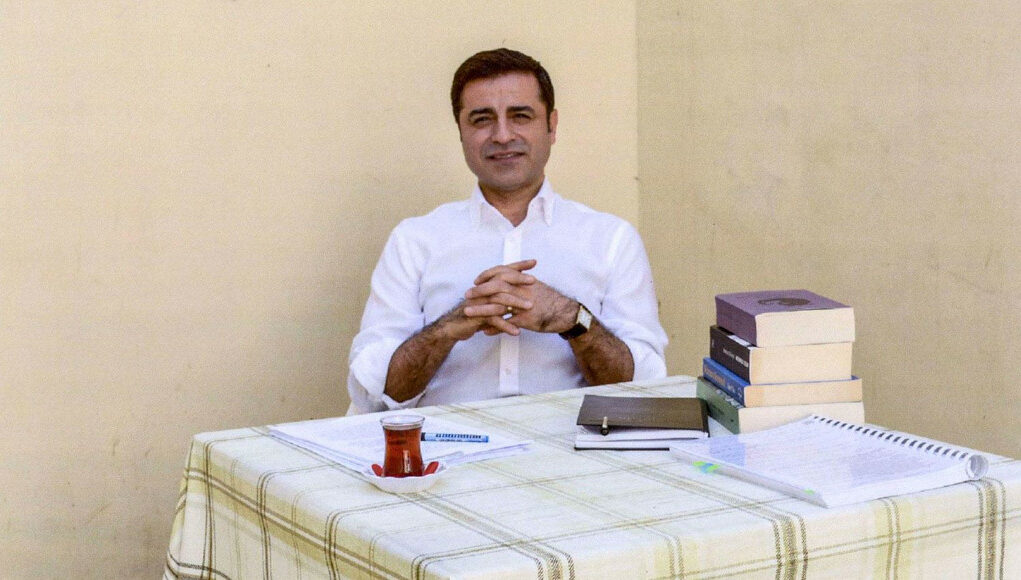 A journalist has claimed that the Justice and Development Party (AKP) government has been trying in vain to make a deal with imprisoned Kurdish leader Selahattin Demirtaş with the aim of gaining an advantage over the opposition in the 2023 elections.

Mustafa Balbay, a columnist for the Cumhuriyet daily, on Wednesday claimed in an article based on backstage rumors in Ankara that the ruling AKP had been trying to strike a deal with Demirtaş to have the upper hand in the upcoming 2023 elections, but that the former pro-Kurdish Peoples’ Democratic (HDP) leader had been refusing to bargain.

According to Balbay, Demirtaş, who has been in prison since Nov. 4, 2016 on terrorism-related charges, was offered immediate release in exchange for a promise to stand as a presidential candidate in the 2023 elections as a rival to the opposition parties’ Nation Alliance in order to prevent the HDP’s voter base from supporting their joint candidate.

As part of its political strategy in Turkey’s west, the HDP, the country’s second-largest opposition party, in 2019 sat out the mayoral races in big cities and urged its supporters to cast strategic votes for the Nation Alliance, consisting of several opposition parties including the main opposition Republican People’s Party (CHP).

Partly due to the support of Kurdish voters, the CHP was able to defeat the governing AKP in a number of major cities, including Ankara and İstanbul, during the 2019 local elections.

The journalist claimed that AKP had to go down that road since it didn’t have many options to make up for losing over 10 percent of its supporters since the last elections held in 2018, according to the latest polls.

“Two roads emerge [for the AKP to win the 2023 elections]: the first one is expanding the Public Alliance, [which includes the AKP and the far-right National Movement Party (MHP)] and the second one is lowering the 50+1 [rule],” Balbay said, referring to the requirement to garner 50 percent of the vote plus one additional vote for election to the position of president, locally known as 50+1 rule.

Referring to President Recep Tayyip Erdoğan’s unsuccessful attempts over the past several months to win over opposition parties such as the Islamist Felicity Party (SP) and the nationalist İYİ (Good) Party, both members of the Nation Alliance, the journalist said it was also hard for Erdoğan to float the idea of changing the 50+1 rule himself since it was a part of a system brought into force by the AKP.

The rule was part of the executive presidential system that replaced Turkey’s parliamentary system of governance in a referendum in 2017. Erdoğan received around 52 percent of the vote in the 2018 election, thanks to the support of his ally, the MHP.

“He [Erdoğan] has failed to create the [proper] ground or alliances to garner more than 50 percent of the vote [in the 2023 elections]. On top of that, if he also offers to lower the threshold, [it would mean that] he had already accepted defeat,” Balbay said.

The journalist added that if the threshold were lowered to 40 percent, as a result of a political environment in which the move couldn’t be seen as directly linked to Erdoğan, his chances of winning the election would increase dramatically.

Presidential High Advisory Board member Cemil Çiçek and AKP MP İbrahim Aydemir recently expressed the opinion that the 50+1 rule should be changed due to its disadvantages for both alliances, while MHP leader Devlet Bahçeli on Tuesday said the rule was “the axis of the presidential system of governance” and that discussing changing it was “unnecessary,” in a statement that raised eyebrows since the AKP and MHP were expected to be on the same page as election allies.