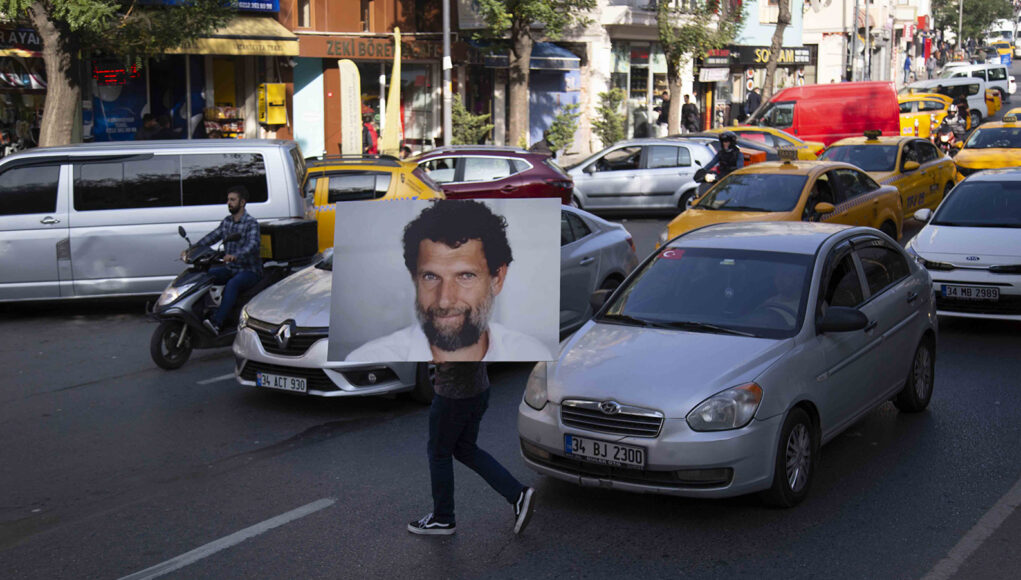 An artist is walking around the streets of İstanbul carrying a portrait of jailed Turkish philanthropist Osman Kavala, to protest his extended imprisonment, the Artı Gerçek news website reported on Sunday.

Ateş Alpar said his aim was to draw attention to the unlawful imprisonment of Kavala, a 64-year-old philanthropist and businessman who has been in jail without a conviction for any crime for four years.

By taking Kavala’s portrait to İstanbul’s streets, Alpar is highlighting how Kavala was stripped of his freedom of movement by being jailed.

“Osman Kavala is moving around among us. He carries universal values in the streets where gentrification and the looting of cultural legacy are glorified. His smile undermines the very unlawfulness that prevents him from walking freely in the streets,” Alpar said.

Kavala faces a potential sentence of life in prison for allegedly trying to overthrow the government of President Recep Tayyip Erdoğan in a July 2016 coup attempt. He also is charged with espionage.

He remains behind bars despite six court rulings and one interim resolution by the CoE Committee of Ministers defining his detention as arbitrary and strongly urging the authorities to ensure the his immediate release.

“As he moves through the crowds … he walks on the pavement of the multicultural and rich geography that constitutes the very fabric of İstanbul. He breathes in the air, melting into the scent of simits, tea and home cooked meals. He blends into the rhythms, sorrows and laughter of the city from his cell,” Alpar added.

Supporters view Kavala as an innocent symbol of Erdoğan’s growing intolerance of political dissent since surviving a failed military putsch in 2016.

But Erdoğan accuses Kavala of financing a wave of 2013 anti-government protests and then playing a role in the coup attempt.

The ECtHR ruled in December 2019 that the prolonged pretrial detention of Kavala was in violation of the European Convention on Human Rights and ordered his immediate release. But Turkey has failed to abide by the ruling despite repeated calls by the Council of Europe’s Committee of Ministers.