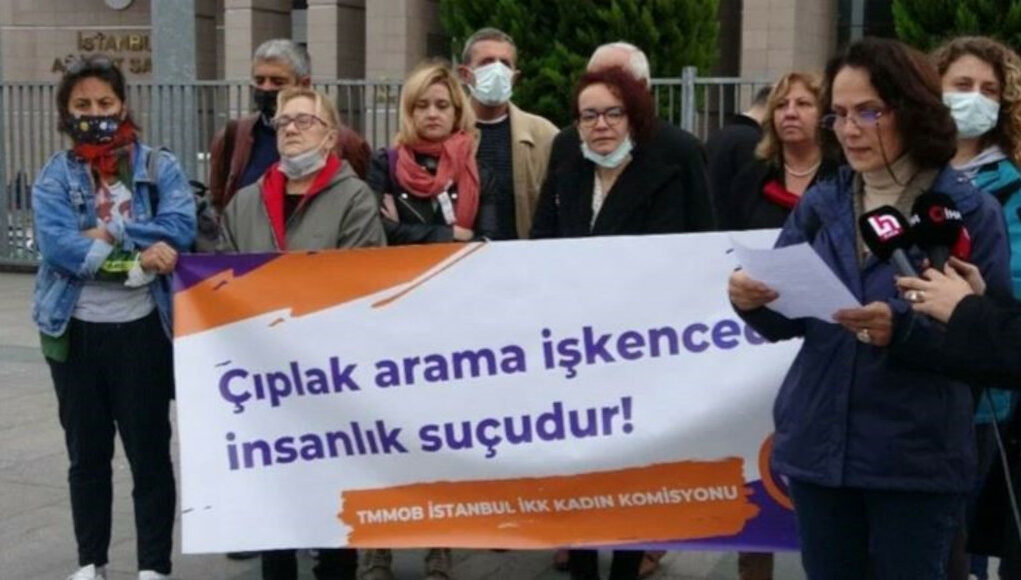 Turkish authorities issued a detention warrant on Tuesday for female police officer Songül Eken Kılıç for conducting an unlawful strip-search of architect Mücella Yapıcı when she was detained during the Gezi protests of 2013, the Stockholm Center for Freedom reported, citing Turkish media.

Yapıcı filed a complaint saying she was mistreated and subject to harassment in detention, alleging that she was made to strip naked and squat. Yapıcı added that her medication was not provided to her on time, although she had suffered from gastric bleeding a short while before.

According to Yapıcı, she needed to take her medications every hour but they were given to her in bulk in the evening. “When we told the officers I needed to take them hourly, they just said they were not my servants and could not bring them to me,” she said.

The first hearing took place on Tuesday, which one of the defendants, Levent Mustafaoğlu, attended via the SEGBIS video conference system. Mustafaoğlu denied the claims that Yapıcı was mistreated and said her medication was dispensed according to doctors’ orders.

The Gezi protests in 2013 erupted over then-Prime Minister Recep Tayyip Erdoğan’s government’s plans to demolish Gezi Park in Taksim. The protests spread to other cities across the country and quickly turned into mass anti-government demonstrations that were violently suppressed by the government, leading to the death of 11 protestors due to the use of disproportionate force by the police.

Yapıcı’s daughter, Canan Yapıcı, was also detained with her mother at the time. “We were threatened and insulted all throughout detention,” she said. “They [police] said they would make us suffer.”

Canan Yapıcı said they had been seeking justice for the past eight years. “I was bleeding and asked for a sanitary pad but was not provided one,” she said. “There were no female officers at the time we were detained, so we were searched two or three days later. I was made to strip naked and was told this was normal procedure.”

The European Court of Human Rights has found that strip-searches constitute degrading treatment when not justified by compelling security reasons and/or due to the way they are conducted.

But the practice has frequently been used by Turkish security forces against people suspected or convicted of political crimes.

Canan Yapıcı added that even the toilets had cameras and they were made to wait hours before they were allowed to use them.

Aysel Durgun from the Union of Chambers of Turkish Engineers and Architects made a statement in front of the courthouse saying this was the first time authorities had acknowledged strip-searches as mistreatment and brought it to court.

“We know that many women have been subjects of this cruel treatment for years,” she said. “Members of the government have denied strip-searches even exist, but hundreds of women came forward and made their experiences public.”

Durgun said it had not been easy for women to speak openly about mistreatment but that this trial would serve as an example. “We want to take this opportunity to say once again that strip-searches are mistreatment and a crime. Those who are responsible must be brought to justice,” she said.

A guide published by the United Nations Counter-Terrorism Implementation Task Force in March 2014 states that any counter-terrorism measure related to the searching of persons must be prescribed by law and that strict and precise guidelines must clearly specify the circumstances in which such measures may be used and specify the conditions that must be observed by those implementing the procedure. Even if a law authorizes — within the context of a personal search or a strip-search — an agent to request a person to remove an overcoat, jacket, gloves, hat, sunglasses or any other item that may be used to conceal the person’s identity, the request may only be made when the agent seeks to confirm the identity of a person or has reasonable suspicion that the person is hiding a weapon underneath the items.