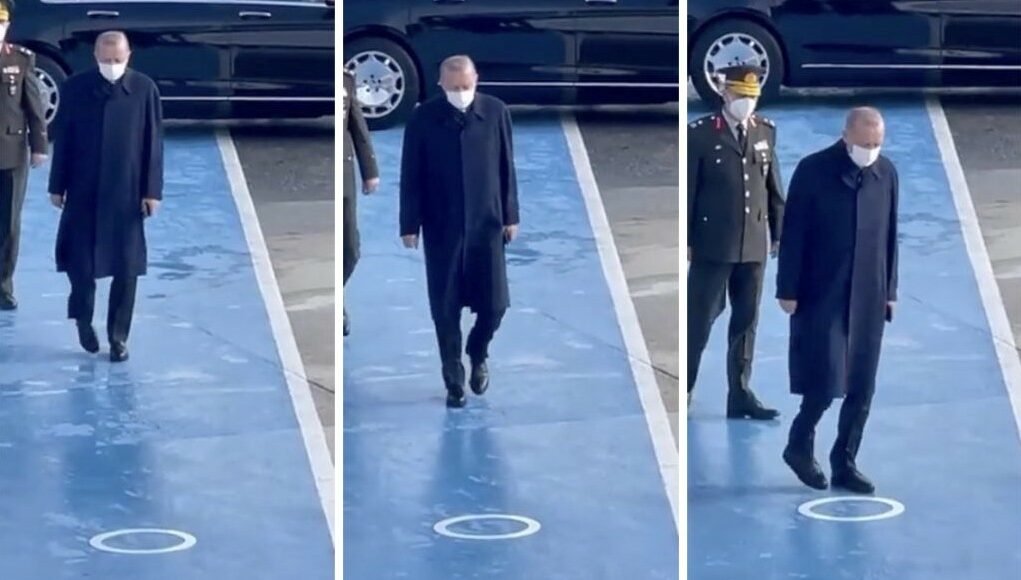 In an apparent attempt to dismiss speculation about the health of Turkish President Recep Tayyip Erdoğan, 67, his communications director, Fahrettin Altun, has released a video showing Erdoğan walking with relative ease and appearing to be in good health.

In the video Erdoğan is seen walking on a blue carpet after getting out of his official car and preparing to salute a group not seen in the video. Erdoğan walks slowly in the video but appears not to have any problems, contrary to another video of him that went viral on Monday night, showing him walking with difficulty.

In the video footage, dated Oct. 29, when Turkey marked the 98th anniversary of the foundation of the Turkish Republic, Erdoğan is seen standing among Turkish flags at his presidential palace after accepting congratulations from guests for Republic Day. Following an announcement about the end of the ceremony, Erdoğan turns left to leave the hall, walking with apparent difficulty, with his legs bent and body moving forward while his hands remain motionless. His assistants hastily take away obstacles in front of him to clear his way.

The video, which went online Monday evening, was watched and commented on by millions of people in several hours.

Over the past few months, speculation has been growing about Erdoğan’s health, particularly after he was seen in public having difficulty speaking and moving.

There were even some claims on social media on Wednesday suggesting that Erdoğan had died, with many citing cancellation of some of his scheduled programs for the day.

In October, Steven A. Cook, an expert on the Middle East and Africa, wrote in an article in Foreign Policy that evidence raising some obvious questions about Erdoğan’s health was growing, enumerating recent incidents where the president is seen needing the assistance of his wife and an aide as he negotiates a set of stairs, seeming to shuffle and having some difficulty walking at the Anıtkabir mausoleum, and fading out and slurring his words during a televised holiday greeting to members of his ruling Justice and Development Party (AKP).

He pointed to the possibility that another strongman could rule a post-Erdoğan Turkey, listing National Intelligence Organization (MİT) Undersecretary Hakan Fidan, Defense Minister Hulusi Akar and Interior Minister Süleyman Soylu among the possible candidates for the office.

Following the publication of the article, Erdoğan shared a video on his Telegram channel of him playing basketball. In the video he wears uniform number 15 with “R. Tayyip Erdoğan” emblazoned on it. He is also the team captain and is seen encouraging his teammates.

Critics interpreted the move as a bid to dismiss the speculation about Turkey’s leader, whose 19-year rule may be contested in the 2023 elections as many Turks grapple with poverty and inflation, and support from his base appears to be declining by the day.

One week after the publication of Cook’s article, Altun made a statement on Twitter, describing the claim in Cook’s article suggesting Erdoğan might be too ill to run for re-election in 2023 as “fake news.”

“Fake news used to be a problem on social media. It seems that the mainstream media, too, suffers from the same issue now. That even major organizations spread such lies is deeply concerning,” Altun tweeted, along with a screenshot of the article.

Rumors about Erdoğan’s health have been circulating for years, with one of his doctors going on record in 2011 to deny the Turkish leader had cancer.

In 2011 Erdoğan, then prime minister, underwent laparoscopic gastrointestinal surgery, and has been walking more carefully ever since.

Erdoğan was last seen in public on Sunday, when he met with US President Joe Biden on the sidelines of the G20 summit in Rome.

He then cancelled his planned attendance at the COP26 climate conference in Glasgow, citing a dispute over security protocols.

The latest wave of speculation appears to have been prompted by Erdoğan’s failure to attend a ceremony of his ruling party, which on Wednesday celebrated the 19th anniversary of its rise to power.