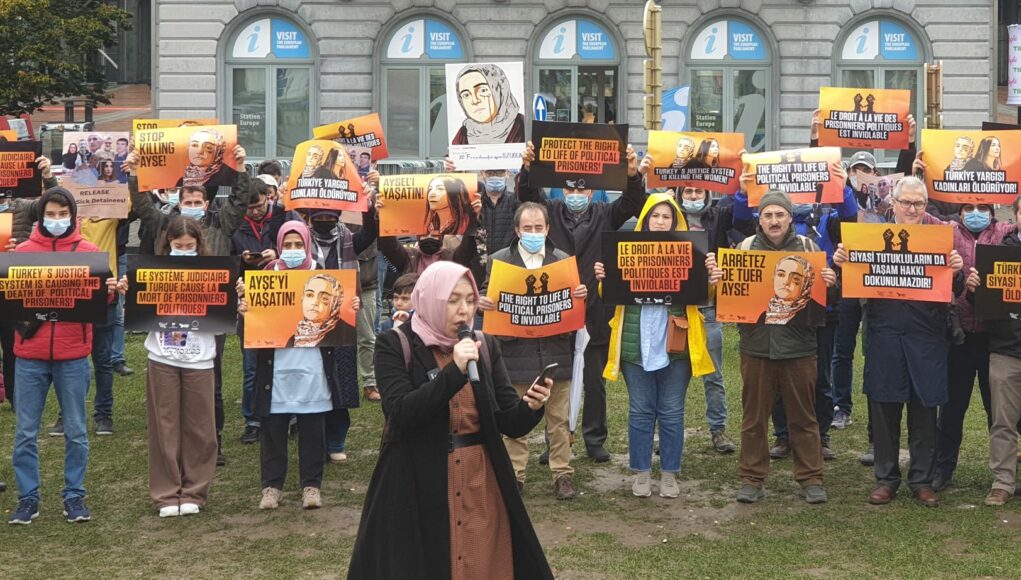 Dozens of human rights activists and a Belgian senator gathered in Brussels’ Luxembourg Square on Saturday to protest the imprisonment of Ayşe Özdoğan, a woman with end-stage cancer who is serving a prison sentence on conviction of trumped-up charges, demanding her release and that of other critically ill prisoners.

The protest was organized by a Brussels-based human rights monitor, Solidarity with OTHERS, to speak up about the plight of Turkey’s sick prisoners, notably Özdoğan.

In a controversial decision, the İstanbul Council of Forensic Medicine stated on Oct. 1 that Özdoğan was fit to remain in prison and that there was no sign of metastasis of the cancer in her body.

Özdoğan was sent to prison in Antalya on Oct. 2 after authorities refused to postpone the execution of her sentence, in a move that has drawn criticism from human rights activists, doctors, opposition politicians, journalists and social media users.

Statements were read in English, French and Turkish by the monitor’s secretary-general, Ali Dinçer, and volunteers Nurşah Tutar and Zehra Kuru Görmüş as protestors held placards reading, “Stop killing Ayşe” and “Protect the right to life of political prisoners.”

“There are many critically ill political prisoners in Turkey who are doomed to die behind bars. Ayşe Özdoğan is one of them. She is suffering from stage four cancer and she has undergone several surgeries. She has wounds on her face and mouth that are frequently bleeding. She can only be fed with a syringe. She has been arrested despite medical reports that she cannot stay in prison,” Dinçer said, and added: “Ayşe Özdoğan is a political prisoner. She is a teacher with no record of violence. Yet, she has been arrested on terrorism charges. And now, her right to life is being taken away from her.”

“In Turkey, the justice system has become a weapon against the government’s opponents. Dozens of seriously ill or disabled prisoners or those suffering from mental disorders due to isolation are kept behind bars to intimidate others who have not yet lost their freedom. Ayşe Özdoğan, who is being dragged to death before our eyes, is the cruelest example of this,” Dinçer said.

Underlining that the EU Charter of Fundamental Rights protects everyone’s right to healthcare, Dinçer stated that the charter “prohibits any interference with bodily integrity as well as torture or inhuman treatment.”

“Yet, political prisoners in Turkey have to wait for days for hospitalization. They are forced to receive treatment while handcuffed to their beds. When their conditions deteriorate, they are released just before their death. We are here today to speak up against this,” Dinçer said, asserting that Turkey’s Ministry of Justice, judges, prosecutors and Institute of Forensic Medicine bear direct responsibility for the death of sick prisoners.

After the statements by the organizers, Belgian senator Simone Susskind, a member of Belgium’s Socialist Party (PS), took the podium and said she came to the protest upon reading an article about Özdoğan’s plight and sent a message of solidarity to all political prisoners in Turkey, including jailed pro-Kurdish politician Selahattin Demirtaş and prominent philanthropist Osman Kavala.

Speaking to Turkish Minute, Susskind said she recently attended a women’s rights conference in Turkey’s İzmir province and that her observations about the current political situation in Turkey convinced her that President Erdoğan will be defeated in the next general election in 2023.

“This is democracy. There should be an alternation of power,” Susskind said and added: “People are sick and tired of the economic situation, of the initiatives [the government] is taking on the international stage and the rights violations. I really hope that democracy will come back to Turkey.”

On the same day, protests took place in nine other European cities, including Paris, Berlin and London, to speak up against the imprisonment of sick prisoners.

According to the most recent statistics published by the Human Rights Foundation (İHD), the number of sick prisoners is in the thousands, more than 600 of whom are critically ill. Although most of the seriously ill patients have forensic and medical reports deeming them unfit to remain in prison, they are not released. Authorities refuse to free them on the grounds that they pose a potential danger to society.