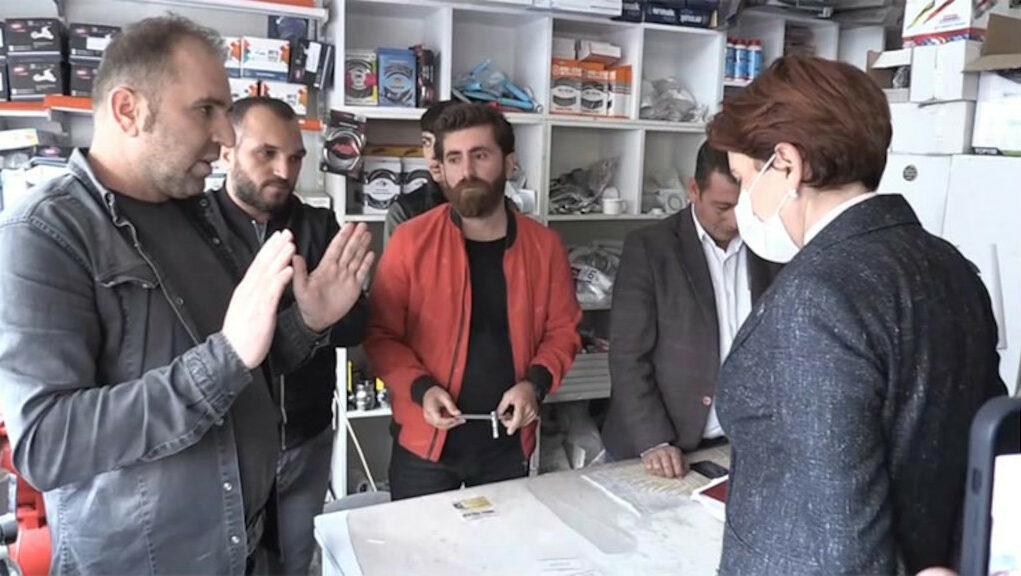 A shop owner has been taken into custody for using the word “Kurdistan” to describe the region he lives in during an exchange with the leader of a nationalist party in the southeastern province of Siirt, according to a police statement, Turkish media reported on Friday.

A statement from the Siirt Police Department said Cemil Taşkesen, the shop owner, was detained on Friday on charges of disseminating terrorist propaganda, apparently due to his use of the word “Kurdistan,” for the predominantly Kurdish region.

Nationalist İYİ (Good) Party leader Meral Akşener on Thursday was visiting the Kurtalan district of Siirt and chatting with small business owners when Taşkesen complained to her about the denial of cultural and political rights to Kurds.

“Our language is denied. Our identity is denied. This is what we do not accept. The place you are currently in is Kurdistan, but unfortunately, the parliament denies it,” he said.

Taşkesen was detained at his home, according to a tweet by Siirt Police Chief Halit Aziz Yılmaz.

The Turkish bureaucracy and the public remain overly sensitive to the word “Kurdistan” and the tri-colored Kurdistan flag, which in some cases have been associated with “treason and terrorism” linked to the outlawed Kurdistan Workers’ Party (PKK), listed as a terrorist organization by Turkey, the US and the EU.

The websites of Turkey’s Presidency and Ministry of Foreign Affairs as well as the state-run Anadolu news agency refer to the Kurdistan Regional Government (KRG) in northern Iraq as Kurdistan.

The detention of Taşkesen over his “Kürdistan” remark has made many remember a speech by President Recep Tayyip Erdoğan in his capacity as a prime minister years ago. Addressing the parliamentary group of his party on Nov. 19, 2013, Erdoğan had openly referred to Kurdistan and Kurds.

“Go read the minutes of the first Parliament 90 or 100 years ago,” Erdoğan had told the main opposition Republican People’s Party (CHP) and the Nationalist Movement Party (MHP), which, at the time, were criticizing the ruling Justice and Development Party (AKP) for its Kurdish peace process.

Anti-Kurdish sentiment has been rising in Turkey, particularly after the AKP abandoned its Kurdish peace process July 2015.

After declaring a ceasefire with the PKK in 2012, Turkish authorities had conducted direct talks with jailed PKK leader Abdullah Öcalan for several years until a truce in effect collapsed in 2015.

Since then, there have been clashes between the PKK and Turkish security forces.

More than 40,000 people, including 5,500 security force members, have been killed in four decades of fighting between the Turkish state and the PKK.