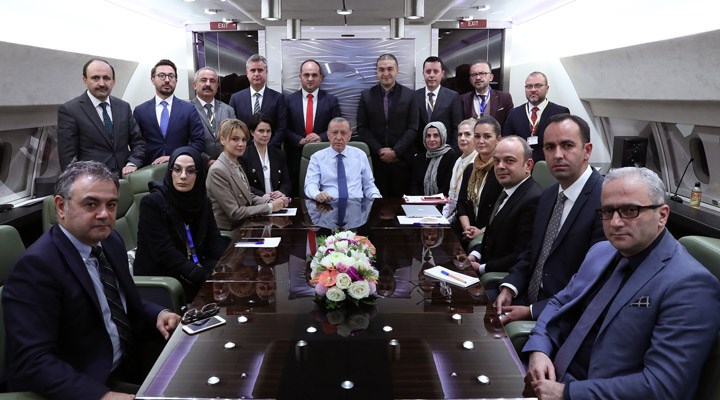 Turkish President Recep Tayyip Erdoğan has argued that his recent backtracking on his threat to expel 10 Western ambassadors over their joint statement of support for jailed philanthropist Osman Kavala wasn’t “a step back” as was stated by foreign media outlets, adding that they would “do what is necessary” regarding a European Court of Human Rights (ECtHR) ruling on Kavala, local media reported on Wednesday.

Answering questions from Turkish press members accompanying him on a flight from Azerbaijan to Turkey regarding foreign media coverage of the events, Erdoğan on Wednesday said: “How did I take a step back? I am on the offensive. There is no stepping back in my book.”

Referring to his threat to expel the envoys, the president added, “The step we have taken isn’t a show of strength, it only asserts that ambassadors working in Turkey cannot interfere in the country’s internal affairs.”

“The ambassadors in this country must know where their actions will lead. For those who don’t know, we have reminded them of Article 41 of the Vienna Convention,” Erdoğan further stated.

Article 41 stipulates respect for the laws and regulations of the receiving state and requires that the internal affairs of the state not be interfered with.

The president also said Turkey would “listen to” the rulings issued by the ECtHR and calls by the Council of Europe regarding the release of Kavala, and then would “do what’s necessary.”

The ECtHR ruled in December 2019 that the prolonged pretrial detention of Kavala, a 64-year-old civil society leader and businessman who has been behind bars on politically motivated charges linked to 2013 anti-government protests and a failed military coup in 2016 since 2017, was in violation of the European Convention on Human Rights and ordered his immediate release. But Turkey has failed to abide by the ruling despite repeated calls by the Council of Europe’s Committee of Ministers.

The diplomatic standoff began when the 10 embassies — including those of Germany and France — issued a statement last Monday calling for the “just and speedy” resolution of the legal case against the jailed philanthropist.

Erdoğan had originally threatened the ambassadors on Thursday and then doubled down — declaring the 10 envoys persona non grata — in televised comments on Saturday.

The president’s change in attitude came after the United States and several of the other concerned countries issued identical statements saying they respected Article 41, which requires diplomats to refrain from interfering in the host country’s domestic affairs.

After a meeting with his ultranationalist ruling coalition partner, Devlet Bahçeli, and then chairing an hours-long cabinet meeting at which his ministers reportedly advised him about the economic dangers of escalating tensions with some of Turkey’s closest allies and trading partners, Erdoğan on Monday announced in televised comments that the 10 ambassadors had learned their lesson and “will be more careful now.”

The move was widely considered by international media outlets as a “step back” on Erdoğan’s part.

The lira, which had plummeted after Erdoğan’s weekend statement, hitting an all-time low of 9.85 against the dollar on Monday morning, was trading up almost half a percent against the dollar out of relief that Turkey and the West had stepped back from the brink of the most serious diplomatic crisis of Erdoğan ‘s 19-year rule.