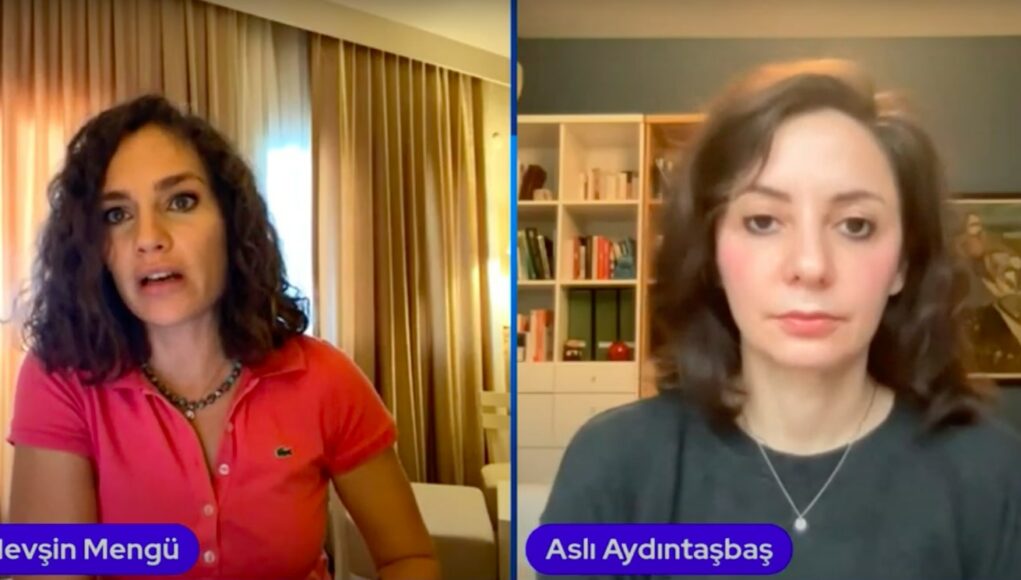 Two Turkish journalists who are critical of the ruling Justice and Development Party (AKP) have come under fire for arguing that “systematic torture no longer exists in Turkey” during a program broadcast on YouTube on Sunday.

Journalist Nevşin Mengü and Aslı Aydıntaşbaş, a journalist and senior fellow at the European Council on Foreign Relations (ECFR), were criticized by rights advocates, journalists and social media users after the latter argued that systematic torture no longer exists in Turkey on Mengü’s program and Mengü failed to object to the statement.

“Aslı Aydıntaşbaş, who can actually say ‘systematic torture no longer exists’ (!), I invite you to monitor data from the Human Rights Association [İHD] and the Human Rights Foundation of Turkey [TİHV],” Şebnem Korur Fincancı, a prominent human rights activist and head of the Turkish Medical Association (TTB), tweeted.

İHD co-chair and lawyer Eren Keskin said, “To the ‘white journalists’ of [this] land: Is the suffering of a mother in [the southeastern town of] Cizre, who had lost both her sons and her daughter and still can’t find her daughter’s body, included in ‘systematic torture’? And we still haven’t confronted [the events of] 1915 and 1938…”

Keskin was referring to the term “white Turk,” which is widely used to refer to the urban republican elite.

Many scholars see the massacre of as many as 1.5 million Armenians in 1915, during the final days of the Ottoman Empire, as the 20th century’s first genocide, while Turkey disputes the description and says the toll has been inflated, considering those killed victims of a civil war.

The years 1937-1938 refer to the killing of thousands of Alevis and the displacement of  hundreds of others in Dersim in eastern Turkey in the early years of the Turkish Republic.

“Nobody expects you to say ‘There’s systematic torture in Turkey’ because that would get you in trouble. [But] at least don’t say ‘there’s no systematic torture.’ With this kind of discourse, you will be the voice of the [Erdoğan] regime, whether you’re aware of it or not,” exiled journalist Tarık Toros said, addressing Mengü and Aydıntaşbaş.

Criticizing the two journalists’ gestures and expressions when talking about torture, Adem Yavuz Arslan, another Turkish journalist in exile, said, “If you forget to turn up the volume [of the YouTube video], you might think they’re talking about something fun!”

“[They say] there’s no systematic torture in Turkey, which means they don’t consider systematically tortured Gülenists and Kurds to be human beings,” he added, referring to President Recep Tayyip Erdoğan and his AKP government’s years-long crackdown targeting both communities.

Ömer Faruk Gergerlioğlu, an outspoken human rights activist and lawmaker from the pro-Kurdish Peoples’ Democratic Party (HDP), on Monday said during a program on YouTube that he receives hundreds of claims of torture in Turkish prisons every day.

“I wish torture had ended in Turkey! … They say there’s no systematic torture, and I say ‘Have a heart,’ some prisoners don’t even go to the hospital just to avoid strip-searches [when leaving and re-entering the facility],” the MP added.

Most recently Turkey’s Constitutional Court on May 18 ordered that Eyüp Birinci, a former teacher arrested for links to the Gülen movement, be paid 40,000 Turkish lira in compensation for being sexually assaulted, beaten and insulted in police custody.

According to the family of Birinci, who was arrested in July 2016 and sentenced to eight years, nine months in prison, he fainted from the torture and was taken to a hospital where it was determined that he was experiencing internal bleeding due to his colon being ruptured from torture inflicted with a police baton.

The court previously ruled in favor of an applicant who claimed that he was tortured for 25 days during his detention at Afyon police headquarters in 2016, ordering the Turkish government to pay TL 50,000 ($6,000) in damages and to launch an investigation into the perpetrators.

Erdoğan has been targeting followers of the Gülen movement, a faith-based group inspired by Muslim cleric Fethullah Gülen, since the corruption investigations of Dec. 17-25, 2013, which implicated then-Prime Minister Erdoğan, his family members and his inner circle.

Dismissing the investigations as a Gülenist coup and conspiracy against his government, Erdoğan designated the movement as a terrorist organization and began to target its members. Erdoğan intensified the crackdown on the movement following a coup attempt that he accused Gülen of masterminding. Gülen and the movement strongly deny involvement in the abortive putsch or any terrorist activity.

After the abortive putsch, ill-treatment and torture became widespread and systematic in Turkish detention centers as evidenced by the UN special rapporteur on torture and other cruel, inhuman, or degrading treatment or punishment in a report based on his mission to Turkey between Nov. 27 and Dec. 2, 2016. Lack of condemnation from higher officials and a readiness to cover up allegations rather than investigate them have resulted in widespread impunity for the security forces.