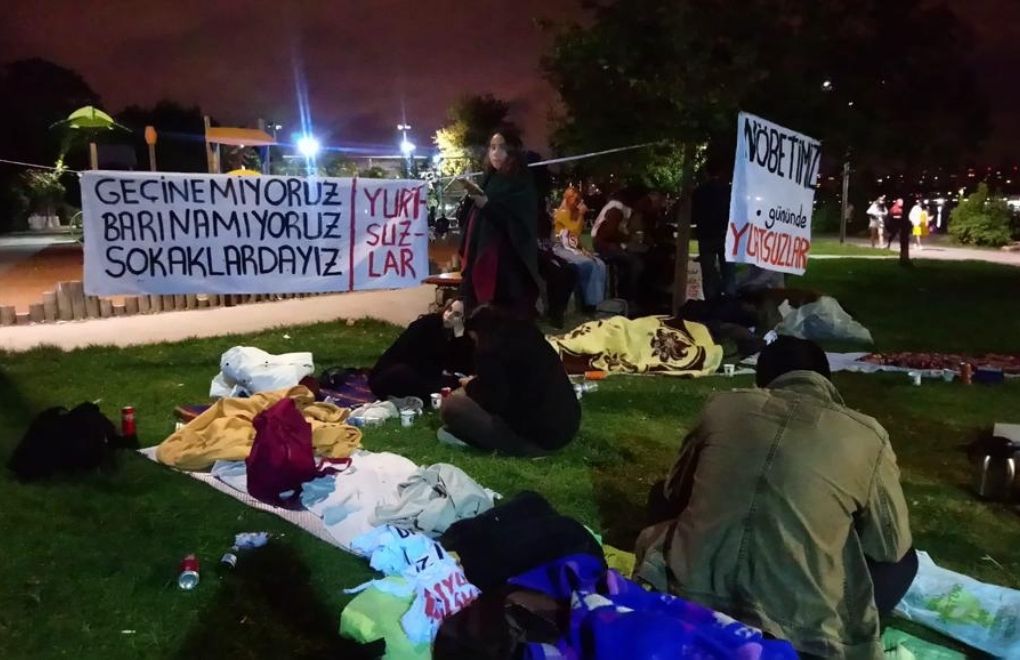 Turkish police have detained at least 80 students sleeping outdoors in protest of high dormitory and rental prices in İstanbul and western İzmir province after President Recep Tayyip Erdoğan targeted them in a speech on Monday, local media reported on Tuesday.

A group of university students calling themselves the “We Can’t Shelter” movement, which staged their first vigil in İstanbul’s Yoğurtçu Park on Sept. 19, sleeping outdoors in protest of high accommodation prices, have gained support from students in other provinces, some of whom also started to stage similar demonstrations.

The detention of the students was announced on the movement’s Yurtsuzlar (the homeless) social media account under the hashtag #YurtsuzlarGözaltında (The homeless are in custody), which became a top trending topic in Turkey.

“At least 80 university students in İstanbul and İzmir are in custody for exercising their right to housing. Torture and detention will not intimidate the homeless, housing is our right, and we will take it!” the group tweeted early on Tuesday.

According to Turkish media reports, the police in İzmir battered the detainees and rear-handcuffed them at the entrance to İzmir Katip Çelebi University’s Atatürk Teaching and Research Hospital in Karabağlar, where they brought them for a medical check.

Yurtsuzlar also shared a video of two police officers dragging a student on the ground in front of the hospital, saying the police officers tried to prevent them from recording such incidents of maltreatment.

The İstanbul Governor’s Office on Tuesday said in a written announcement that 28 people detained in Kadıköy were released after giving statements to a public prosecutor.  Thirty-three students detained in İzmir were also released on Tuesday, Yurtsuzlar said in a tweet.

“Some people who recently have been sleeping on benches in parks have nothing to do with being a student. This is just another version of the Gezi Park [protests],” Erdoğan said on Monday, adding that Turkey has the largest number of public higher education dormitories in the world.

The 2013 protests, which erupted over government plans to demolish Gezi Park in Taksim, quickly turned into mass anti-government demonstrations that were violently suppressed by the government, leading to the death of 11 protestors due to use of disproportionate force by the police.

A group of students in the eastern province of Tunceli who held a march in protest of Erdoğan’s remarks as well as the high housing prices were kicked out of their dormitory managed by the state-run Higher Education Credit and Hostels Institution (KYK) on Monday night, local media also reported.

Meanwhile, a group of female students on the KYK’s waiting list were also thrown out of their dormitory in Tunceli on Monday night because students on the main list, who are entitled to stay at the dormitory, had just arrived, Turkish media reports also said.

Students at Munzur University protested the incident, which was criticized by many on social media, by marching in and around the dormitory and chanting slogans, claiming that their right to housing was being violated. Male university students also held a march in support of the students kicked out of the KYK dormitory.

Speaking during a public event, Interior Minister Süleyman Soylu shared statistics regarding the protests of the We Can’t Shelter movement staged around the country, the state-run Anadolu news agency reported on Tuesday.

According to Soylu, only 310 of the 2,243 people who participated in protests held in a total of 24 provinces were students. Among the protesters, 26 were members of “leftist marginal groups,” the minister added, referring to the Kurdistan Workers’ Party (PKK) and the extremist Marxist-Leninist Communist Party (MLKP) — listed as terrorist organizations by Turkey — in addition to LGBT people, among others.