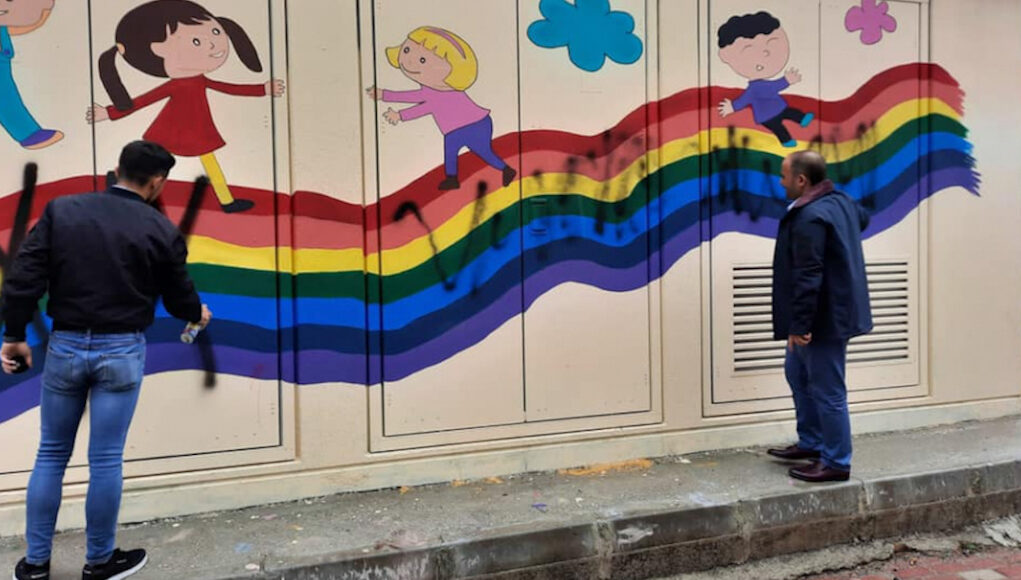 The mural had been painted by Bursa’s Gemlik Municipality on the walls of a power plant belonging to Limak Enerji.

The nationalist Grey Wolves (Ülkü Ocakları) Gemlik Branch posted a statement titled “A Warning from the Grey Wolves” on social media, sharing photos showing how its members sprayed black paint on the mural.

The use of the rainbow, a symbol of LGBT+ groups, as well as other LGBT+ iconography has been increasingly associated with homosexuality in Turkey.

“We would like to believe that there was no [ill] intent involved [in using rainbow colors in the pictures] as was the case with the recent naked whirling dervish incident in İzmir,” the statement said, urging the Gemlik Municipality to do the “right thing and correct the mistake promptly.”

The statement argued that the mural sought to make children see homosexuality as normal, saying they had been mobilized by their fellow citizens who were sensitive about such things.

The Grey Wolves are the youth wing of the MHP, an ally of the ruling Justice and Development Party (AKP).

When the tensions between Azerbaijan and Armenia spilled over to Europe last year, a mob of Grey Wolves had defaced the Armenian Genocide Memorial in the French town of Decines-Charpieu, spray painting it with ultranationalist symbols as well as the letters “RTE,” the initials of Turkish President Recep Tayyip Erdoğan.

Homosexuality is not illegal in Turkey, but homophobia is widespread.

Kaos GL, one of the oldest LGBT rights groups in Turkey, last year counted more than 2,000 news articles it deemed discriminatory — a 40 percent jump over 2019.

Last year, Netflix cancelled the production of a Turkish series featuring a gay character after failing to win the government’s permission to film.

In June, French sporting goods retailer Decathlon became the target of a Turkish media boycott campaign after saying it stood in solidarity with the LGBT community.

And in April, Erdoğan rallied to the defense of a top religious affairs official who linked homosexuality to the spread of disease amid the coronavirus pandemic.