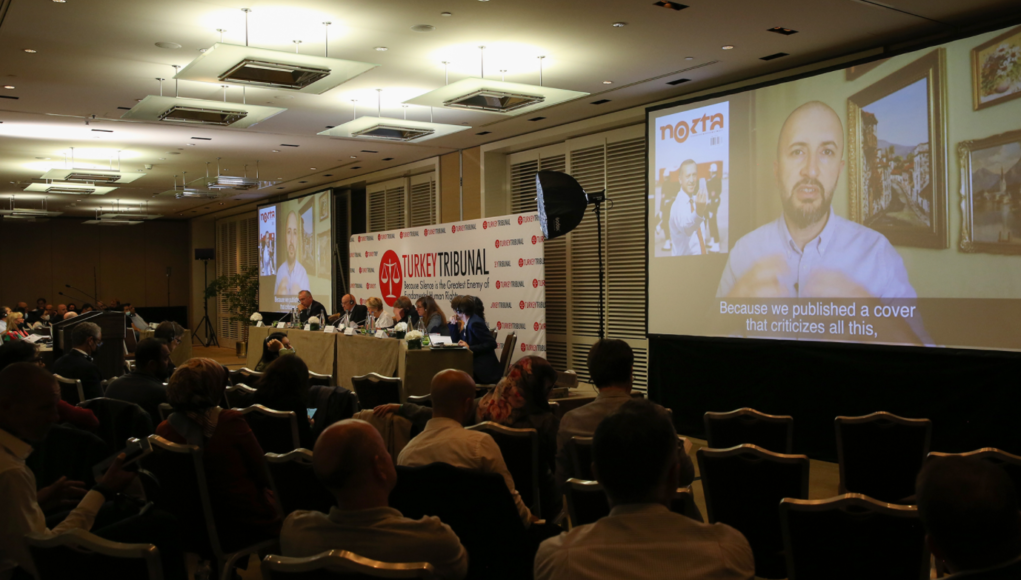 The panel of judges of the Turkey Tribunal, a civil society-led, symbolic international tribunal established to adjudicate recent human rights violations in Turkey, on Tuesday heard the testimony of two journalists who were forced to flee the country as a result of a government crackdown on the media.

Meltem Oktay, a Kurdish journalist who was jailed for three years on charges of “membership in a terrorist organization” over her coverage of the war-torn Southeast of the country was the first to testify.

“The pressure on pro-Kurdish politics and the detention and arrest [of Kurds] increased [after the collapse of peace talks between Ankara and Kurdish militants],” Oktay said, recounting why she became a target of the Turkish government.

After President Recep Tayyip Erdoğan’s Justice and Development Party (AKP) lost its governing majority for the first time in the June 2015 elections, he reignited a war against the Kurds in the country that had come to a halt with a cease-fire with the outlawed Kurdistan Workers’ Party (PKK) declared by the AKP in 2012.

“I was in Nusaybin [a Kurdish-majority town] for six months, and I covered all these events in order to inform the public,” Oktay said.

Following the end of the ceasefire, there were repeated clashes between security forces and PKK members in southeastern provinces that resulted in nearly 200,000 locals leaving their homes due to fighting and curfews, with more than 200 civilians killed in the town of Cizre alone.

The police officers came to detain us in our house,” said Oktay, adding that they seized her equipment during a search of the premises.

“They put us in an armored vehicle and took us to a detention center in Nusaybin,” Oktay told the judges.

“A police officer told me, ‘You should be thankful that there was a news article about you in the press; otherwise you can’t imagine what would have happened to you’,” Oktay said. She said she stayed in jail for four months, only to be arrested again in 2017 to serve a prison sentence of two years, seven months on charges of membership in a terrorist organization.

When the judges asked Oktay which terrorist organization she was accused of being a member of, she said it was the PKK.

“I am not a member of the PKK, I am only a journalist. Journalism is my job,” Oktay said.

After Oktay, Cevheri Güven, another journalist living in exile, gave his testimony in a video call.

Güven said he had to leave Turkey in September 2016 after spending six months in jail on charges of disseminating the propaganda of a terrorist organization in a cover published in the Nokta magazine where he was editor-in-chief.

“I wasn’t able to learn which terrorist organization that was for six months,” Güven said, adding that he found out it was the PKK in the end.

Güven said he had to flee Turkey due to arrest warrants, the shutdown of the Nokta magazine where he was the chief editor and a prison sentence of 22 and a half years that an İstanbul court had handed down to him.

“At this moment, the Turkish people are very interested in media based in Europe, and the reason for this is that they don’t have their own free media in Turkey,” Güven said.

“It’s the only way they can access independent news, thanks to journalists publishing from Europe, speaking out from Europe.”

Turkish journalists are often targeted and jailed for their journalistic activities. Turkey is one of the world’s biggest jailers of professional journalists and ranked 153rd among 180 countries in terms of press freedom in 2021, according to Reporters Without Borders (RSF).