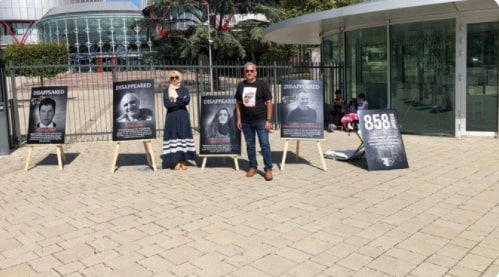 A Turkish couple living in Europe started a five-day protest on Wednesday in front of the European Court of Human Rights (ECtHR) to draw attention to enforced disappearances in Turkey, the Stockholm Center for Freedom reported, citing Bold Medya.

Mehmet Ali Uludağ, a former public servant summarily dismissed from his job by an executive decree, and his wife Mine Uludağ have been demanding that the authorities find missing people, some of whom are believed to have been abducted by Turkish intelligence.

“We will not remain silent about enforced disappearances and injustice,” said Mehmet Ali Uludağ. The couple was supported by social media users, who also insisted that authorities investigate the cases of missing people.

Human rights activists have pointed out that enforced disappearances have become worryingly common in Turkey and that most disappearances were not effectively investigated by prosecutors.

Sezgin Tanrıkulu, a human rights defender and deputy from the Republican People’s Party said  there have been 1,352 known enforced disappearances since 1980. He said authorities needed to take immediate steps to counter such incidents and to stop them once and for all.

Nearly 30 people have been abducted by Turkish intelligence since 2016. Most of the abductions targeted members of the Gülen movement, a faith-based group inspired by Muslim cleric Fethullah Gülen. Many of the abductees mysteriously reappeared in police custody in Ankara after six to nine-month absences. Apparently intimidated, most of them had kept their silence after their reappearance.

However, one abductee revealed in court he was subjected to torture during the time he was missing.

There have also been people not linked to the movement disappearing under suspicious circumstances, and family members have complained that the authorities have not conducted the necessary investigations to find them.

The family of Gülistan Doku, a young Kurdish woman who went missing on January 5, 2020, started a sit-in in July in front a courthouse in Tunceli province, saying the police covered up the fate of their daughter and failed to carry out the duties of their job.

A Chaldean couple disappeared on  January 11, 2020 from their village in southeastern Şırnak province. The body of the wife, Şimoni Diril, was found 70 days later not far from the village, but the husband Hürmüz Diril is still missing.

Chaldeans are a minority Christian group who share a common history with Assyrians but have a separate church.

The Dirils were one of the families who had to move from their village in 1989, and a year later it was burned to the ground by security forces because the villagers had refused to join the village guards to fight the outlawed Kurdistan Workers’ Party (PKK), an armed secessionist group considered a terrorist organization by the United States, Turkey and the European Union.