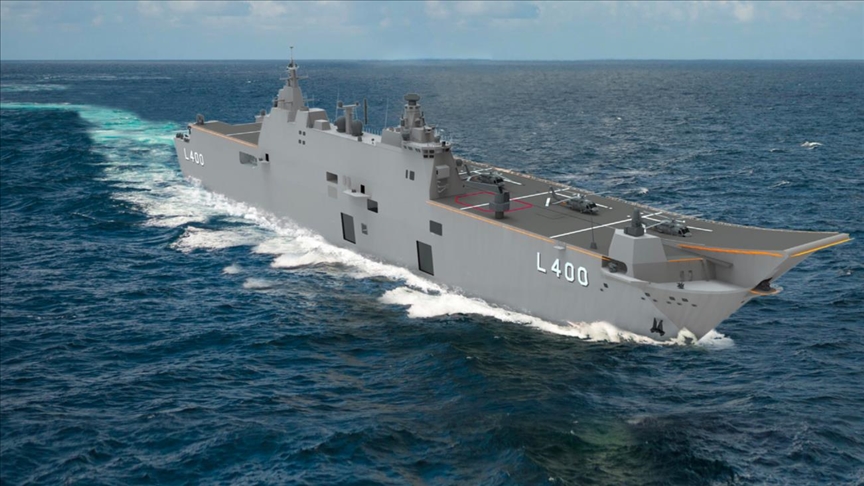 The CAATSA (Countering America’s Adversaries Through Sanctions Act) sanctions imposed on Turkey due to its purchase of Russia’s S-400 air defense system came as a great shock to Turkey. These sanctions caused many defense industry projects to be halted.

The sanctions had the most significant impact on the F-35 project, which interrupted the plans of the Turkish Air and Naval Forces. Turkey has lost the ability to deploy fixed-winged air assets onboard its future Landing Helicopter Dock (LHD) Anadolu after the United States removed Turkey from the F-35 Joint Strike Fighter (JSF) program. When construction of the TCG Anadolu started, Turkey was an active member of the JSF program. Therefore, to accommodate F-35B short-takeoff and vertical-landing (STOVL) aircraft, the Turkish Navy refitted the TCG Anadolu with a fully equipped flight deck (complete with a ski jump ramp in front). The ship’s deck was built with this aircraft in mind; however, it lacks the required length structure, supplies and equipment needed for traditional fixed-wing aircraft landings. The F-35 is the only viable option for TCG Anadolu since its deck was designed only for VTOL and STOVL air assets.

As a result TCG Anadolu air force projection capacity has been severely impacted without the F-35B. Despite their LHD designation, these ships are regarded as light aircraft carriers thanks to their ability to carry fighter jets. Aircraft carriers are the symbols of a country’s soft and hard power. They are known as “50.000-ton diplomats” since they can help a country’s policies through flag diplomacy and play a crucial role in peace and conflict. Furthermore, aircraft carriers provide regional airspace control by transferring the airpower they carry from one region to another.

Because of their optical targeting systems, data fusion and electronic warfare capabilities, the F-35Bs have brought the airpower of aircraft carriers to a new level. Moreover, F-35Bs are particularly good at neutralizing opposing assets and targeting strategic objectives from afar, thanks to their A2AD (Anti Access/Area Denial) capability. In addition, the recognized maritime and air picture can be established quickly, with their advanced data link and data fusion capability. After being equipped with the standoff missile, F-35B jets will engage the enemy’s high-value units from beyond the standoff range. With these features, we can say that the F-35s will make aircraft carriers more powerful.

After Turkey’s expulsion from the JSF program, the Turkish defense industry began developing other alternatives to compensate for the loss of fighter capability and to meet public expectations. The first effort was converting the LHD into a drone-carrier ship. Turkish defense contractor Baykar, the producer of TB-2 drones, has announced that it plans to deploy a brand-new drone called the TB-3 on LHD Anadolu, a folded-winged MALE Unmanned Combat Aerial Vehicles (UCAV) derived from the TB-2.

The conceptual images show that it will outfit LHD Anadolu with a roller system to launch drones and secure them with a hook system while landing. Turkey’s top procurement official, Ismail Demir, stated that TCG Anadolu will be able to deploy 30 to 50 drones on board and will be able to operate 10 armed drones simultaneously.

Baykar presented its MIUS unmanned combat aircraft project in July 2021, following the initial announcement. MIUS will be operated on the TCG Anadolu, according to Baykar’s chief technology officer, Selcuk Bayraktar. In addition, Baykar published another rendering of the MIUS and the TB-3 Bayraktar drones working together onboard the TCG Anadolu.

Bayraktar emphasized the new unmanned combat aircraft’s air-to-air capability, saying, “MIUS will operate at a cruising speed close to the speed of sound; subsequent prototypes will fly at supersonic speed.” It will carry a payload of approximately 1,500 kilograms. It will be capable of deploying air-to-air, air-to-ground and cruise missiles.” The prototype of MIUS is scheduled to make its maiden flight in 2023.

Although the Turkish defense industry is attempting to compensate for the F-35’s absence by generating drone programs, it is unrealistic to expect the building of a competent air force just utilizing UCAV. A drone-carrier ship would also be a new operational concept. Since the drones do not yet have air-to-air combat capability, their primary purpose seems to be ISR (intelligence, search and reconnaissance) and small-scale strike operations, such as engaging coastal targets and naval assets with low air-defense capabilities.

Rather than relying solely on drones, large navies such as the Royal Navy are developing operation concepts where F-35s and drones can be used together. The F-35Bs can control the combat drones in a network-centric architecture, and they can carry out small and medium-sized strikes against land and surface targets using missiles and munitions. With such a network-based system, the F-35B would have complete control over the drone, including the ability to fire the drone’s missile. This option would boost the JSF’s ammunition capacity.

The F-35’s capabilities have boosted airpower to greater levels. The main disadvantage of Turkey’s removal from the F-35B program is that the Turkish Armed Forces’ future air force projection plans will be affected. Turkey’s future carrier, the LHD Anadolu, has lost the air force projection capabilities and the F-35’s network-centric combat skills. TCG Anadolu could have been a light aircraft carrier with the F-35, demonstrating the Turkish Navy’s soft and hard power by integrating air and sea forces in a network-centered operational environment. In addition Turkey’s drones could have been used in hybrid operational concepts of a network-centered operation.

Under these circumstances, it seems unlikely that the UCAVs to be deployed on the TCG Anadolu will be able to fill the gap created by the lack of F-35Bs.