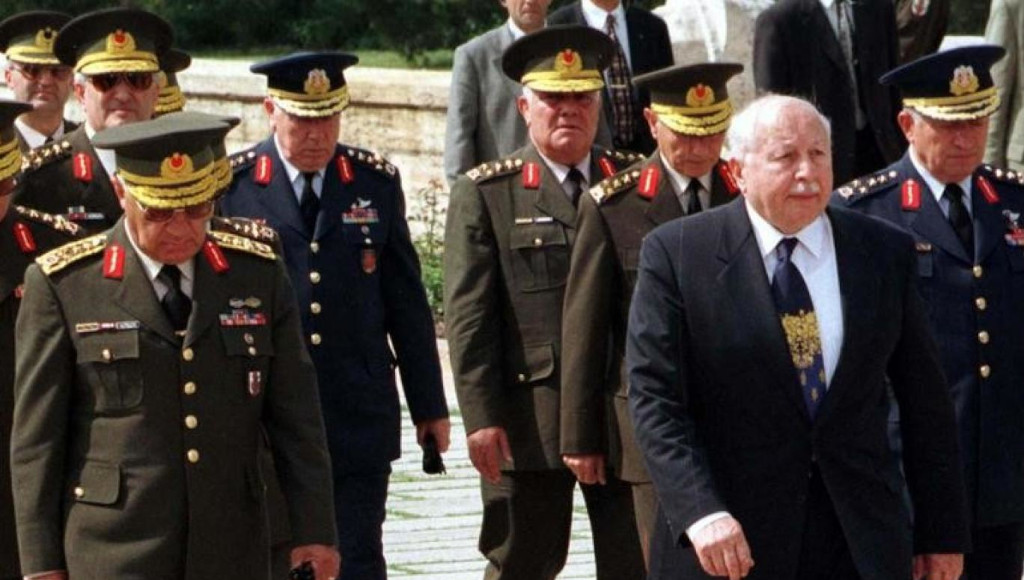 A Turkish court has issued arrest warrants for 14 defendants, mostly retired generals, after the Supreme Court of Appeals upheld their life sentences for their roles in the post-modern coup of February 28, 1997 following the issuance of a military memorandum, Turkish media reported on Thursday.

Ankara 5th High Criminal Court examined the Supreme Court of Appeals’ writ upholding the sentences of the 14 defendants before issuing arrest warrants for them. The warrants were sent to the prosecutor’s Office, which will reportedly give the defendants time to surrender and issue orders to apprehend those who fail to turn themselves in during the allotted time.

The Supreme Court of Appeals had upheld the life sentences handed down to the 14 defendants on July 9, and its decision was sent to the local court on July 26.

The Ankara 5th High Criminal Court had issued its final judgment on July 13, 2018, sentencing the 14 defendants to life in prison on charges of forming criminal associations to overthrow the government of the Republic of Turkey and acquitting 68 defendants.

The court had not ruled to imprison the defendants during appeal due to their advanced age, instead ruling for judicial supervision and a ban on traveling outside the country.

The case tackles the infamous military intervention of Feb. 28, 1997, often described as a “postmodern coup,” which did not result in direct military rule but forced the late Prime Minister Necmettin Erbakan to resign after the MGK issued a memorandum.

The bloodless “postmodern” coup is famous for having deposed the head of government after tanks paraded on the outskirts of Ankara and Erbakan was given an ultimatum.

Because the Islamist Erbakan-led government was forced out without the dissolution of parliament or the suspension of the constitution, the event was labeled a “postmodern coup” by members of the military involved in the process.

Erbakan resigned four months later, while his conservative Welfare Party (RP) and its successor, the Virtue Party (FP), were both banned by the Constitutional Court in January 1998 and June 2001, respectively. Erbakan, who died in 2011, pioneered Islamist politics in Turkey, a Muslim country with a secular state system, paving the way for the later success of current President Recep Tayyip Erdoğan’s Justice and Development Party (AKP). Erdoğan was also involved in politics under Erbakan’s party and was elected mayor of İstanbul in 1994.

Turkey saw violent coups in 1960 and 1980, but under Erdoğan, who survived an abortive putsch in 2016, the political strength of the military has been drastically rolled back.