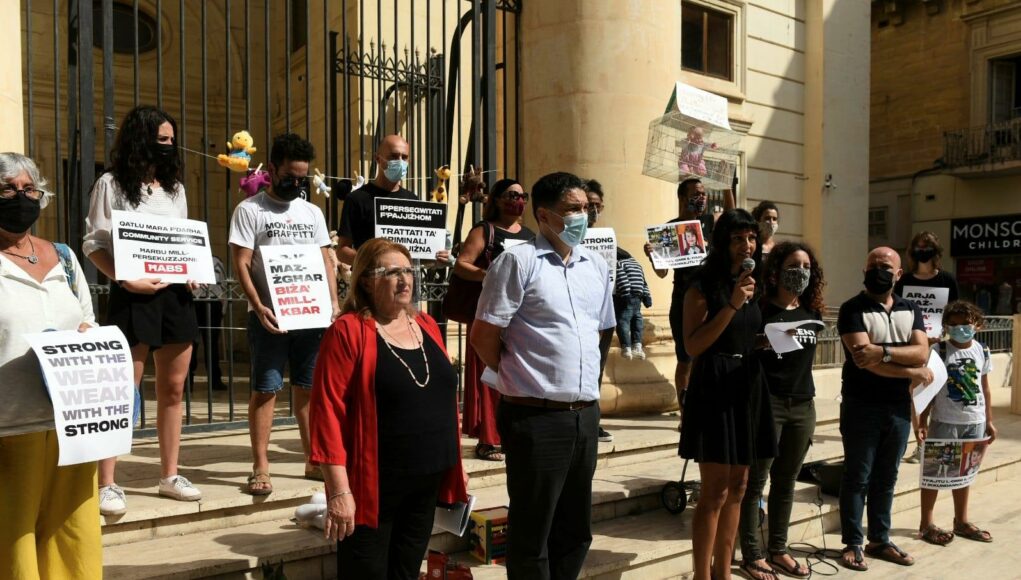 Two Turkish women who fled Turkey to avoid a government crackdown in the aftermath of a coup attempt in 2016 and were arrested in Malta in late July for using false travel documents should be released, protestors said on Thursday, the Times of Malta newspaper reported.

Malta’s justice system lacks proportionality, the protesters said as they demonstrated outside a courthouse in the wake of the six-month sentences handed down to the Turkish women, which separated them from their toddler sons.

The Malta court ordered a jail sentence of six months for each of the women, identified as Rabia Yavuz, 27, and Müzekka Deneri, 29, after they admitting to using forged travel documents but said they could not return to Turkey for fear of political persecution.

The protest was attended by members of Movement Graffitti, the Maltese Association of Social Works and the Aditus Foundation as well as former Maltese President Marie Louise Coleiro Preca as president of Euro Child, a network of organizations and individuals working with and for children in Europe.

The protesters said that while the courts had given suspended jail terms to sex offenders, the Turkish women fleeing their country were jailed for six months in a judgment that ignored their children’s best interests.

“I have seen people convicted of sexual offenses getting suspended sentences. Where is the proportionality? Without proportionality this building behind me is useless,” said Andrew Azzopardi, who represented social workers as he stood on the steps of the law court building.

“For years we have been waiting for the Protection of Minors law and, now that we have it, we are not using it. Where is the best interest of the children? Where is their voice? The justice system is failing to protect the most vulnerable,” said Azzopardi, who also heads the Church’s Safeguarding Commission.

The two women have appealed the sentence and will soon be requesting bail.

The women’s children have been placed under state protection. For the first week they saw their mothers daily via virtual calls but on Thursday they were reunited with them for the first time.

Speaking during the protest Coleiro Preca said the jail term was “shameful.” Malta was not living up to its obligations under the UN Convention on the Rights of the Child, she insisted.

“I am a Maltese mother who has experience raising a child. My heart ached when I thought of these young children. They are in their formative years. Anything that happens now will mark them for life,” she said, adding that she would now write to the chief justice to request a meeting to discuss the issue together with stakeholders.

Neil Falzon, from Aditus, said this was a case of women fleeing their country and having to resort to false documents out of desperation.

“They had no choice but to bypass laws. This is not justice.”

Mary Grace Vella, from Graffitti, said this was not the first time that the courts had delivered harsh punishments to migrants in what she termed “institutionalized racism.”

“They are strong with the weak and weak with the strong,” she said.

The Turkish women and their husbands — who are in Greece where the families fled to last year — are alleged members of the Gülen movement, which was blamed for a failed coup in Turkey five years ago. Members of the movement have been persecuted since then.

The women, both teachers, were arrested at Malta airport on July 26. They had been travelling from Greece to Belgium via Malta when they were stopped. The women had presented false French and Italian identity cards and one of them also had two illegal Romanian cards.

In an interview with Times of Malta, their husbands explained how the two families lived in hiding in Turkey for several years following the 2016 failed coup. Last year they travelled to Greece as irregular migrants. Following failed asylum requests in Greece they decided to leave in search of a peaceful life.

After various attempts to leave together they decided to change strategy and send the women and children first.

The men are in daily contact with their wives. They speak to them every day over the phone but, so far, they have not been able to speak to their sons.