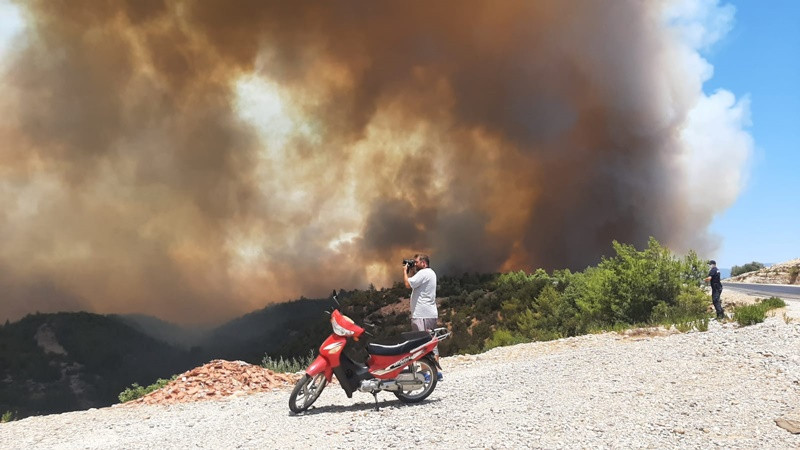 Dozens of people were taken to hospital for smoke inhalation and several for burns as a forest fire ravaged several communities near a Mediterranean tourist resort in the south of Turkey on Wednesday, Agence France-Presse reported, citing local media.

Footage on social media and Turkish TV showed rescuers dumping fire retardant from helicopters on burning buildings and fields in and around the coastal town of Manavgat.

Turkish President Recep Tayyip Erdoğan said “all necessary support will be given to our citizens who have suffered from the fire,” adding an investigation had been launched into the cause.

Hundreds of forestry workers, aided by helicopters and a plane, tried to bring the fire under control.

Local officials said four districts of the town had been evacuated and the fire was partially under control.

It was not immediately clear how many people had been affected, but NTV television said 20 buildings housing around 500 people had burned down in one part of the town.

The Anadolu state news agency denied initial reports that a local hospital had been evacuated as a precaution.

Thick plumes of black smoke shot up into the sky some 75 kilometers (45 miles) east of the Turkish resort city of Antalya.

The coastal region around Antalya is a popular summer resort destination for European tourists — especially those from Russia and parts of eastern Europe.

Antalya mayor Muhittin Böcek said the fire posed no risk to the resort.

“Thankfully, we have had no losses of life,” Böcek told NTV television. Flames appeared to have erupted at four locations at once, he added.

“This suggests an arson attack, but we do not have clear information about that at this stage.”

Agriculture Minister Bekir Pakdemirli confirmed that fires had started in four locations, but said it was premature to say what had caused the blaze.

Winds of up to 50 kilometers an hour (30 miles per hour) were fanning the flames, he added.

“Our job now is to fight the fire,” the minister said in televised remarks. “There will be an investigation and the causes will be determined later.”