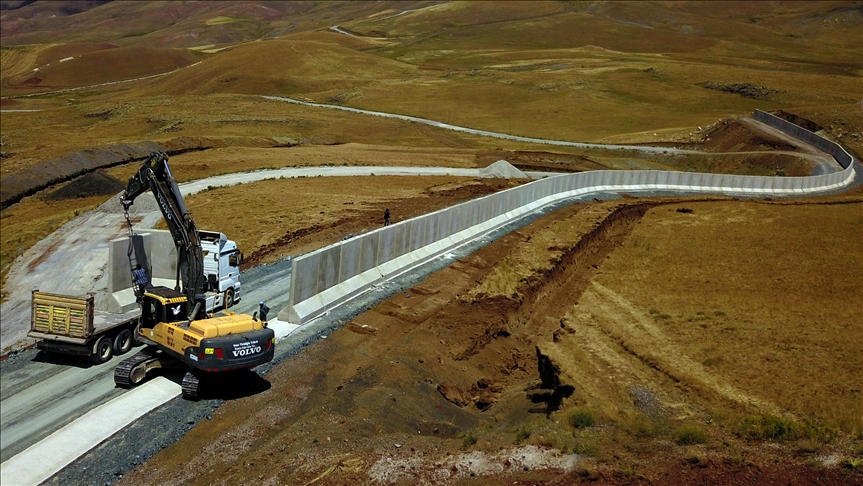 Turkey has been making progress in its plan to build a wall on its Iranian border in an effort to prevent illegal crossings, migrant trafficking and smuggling activities, Euronews Turkish service reported on Friday.

The installation of a three-kilometer section of the modular wall has been completed, and a 110-kilometer-long ditch has been dug. Seventy-six mono-blocs have also been built.

The modular wall, interspersed with smart towers, will extend from the Çaldıran district of Van province to the Doğubayazıt district of Ağrı and the Yüksekova district of Hakkari along the common border between Turkey and Iran.

Concrete blocks, three meters in height, 2.80 meters in width and weighing seven tons each, are produced by batch plants before they are laid along the border by heavy equipment.

Security forces are also conducting de-mining activities along the border before any construction activity.

The project aims to ensure uninterrupted and effective control and monitoring of the border thanks to the smart towers.

The construction of the wall along the border with Iran comes at a time when there are reports of an increased influx of Afghan refugees.

Last week, videos showing Afghans easily crossing the Turkish border were posted on social media, noting that Afghans were fleeing potential retribution by the Taliban, which is increasing the territory it controls in Afghanistan amid a US troop withdrawal.

Journalist İsmail Saymaz said in a column in the Cumhuriyet daily that Lake Van in eastern Turkey had become a “sea of refugees.” Claiming that the number of refugees in Turkey is too high, Saymaz said the Turkish people were right to be angry and anxious.

Turkish authorities have been detaining migrants at the eastern border in an attempt to stop undocumented entries to the country.

The United Nations High Commissioner for Refugees (UNHCR) estimates 270,000 Afghans have been displaced inside the country since January, bringing the number of people forced from their homes to more than 3.5 million.

According to UNHCR Turkey hosts the largest number of refugees worldwide. The country is currently home to some 3.6 million registered Syrian refugees along with close to 320,000 persons of concern from other nationalities.