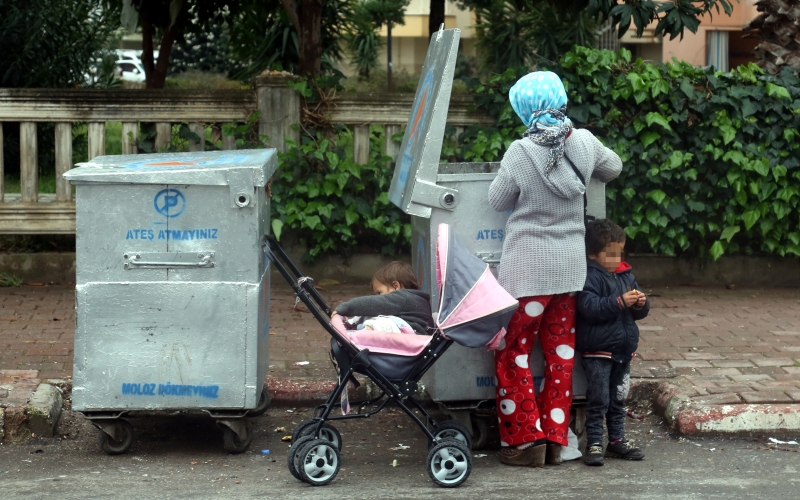 Last month Turkish President Recep Tayyip Erdoğan insisted that “Turkey has never compromised on free-market rules and is now much closer to achieving its goal of becoming one of the 10 largest economies in the world.” But nongovernmental organization studies and reports show that poverty is increasing and the economic situation of the country is getting worse.

The growing number of people waiting outside grocery stores for discarded fruits and vegetables, single mothers unable to breastfeed their babies because of the malnourishment and suicide associated with poverty, scarcity and economic crisis are the main evidence of Turkey’s vulnerability.

Döndü, 29, an unemployed single mother living in Istanbul, does not feel safe and is afraid for her children. She says she hasn’t been able to afford sufficient food or a safe place to live for more than a year.

“I can’t look my children in the eye. Some days, I even can’t find a single piece of bread to give them. People pity us and help, but I don’t know how long we can live like this,” says Döndü, who is separated from her husband and has two children to feed.

Hacer Foggo, a co-founder of the Deep Poverty Network, a civic initiative helping vulnerable people for two decades, explains Turkey’s poverty situation as “deep poverty,” which refers to a chronic state of abject poverty faced by those living under the poverty line.

The concept of “deep poverty” has been used more and more frequently in the last few years and has made it onto the public agenda thanks to the efforts of the Deep Poverty Network.

Besides their regular assistance, the Deep Poverty Network has also helped poor people during the COVID-19 pandemic in Turkey. The network provided food aid to 3,000 people in several districts and neighborhoods in İstanbul including Şişli Kuştepe, Beyoğlu Kasımpaşa and Fatih Karagümrük, among many others.

Foggo, also a writer and human rights advocate, warns that the work of NGOs is important but insufficient and that the Turkish government needs to intervene in this poverty situation with the mindset of welfare state after the pandemic.

“Children and babies are among the biggest victims of this whole process. Parents have difficulty accessing even food and baby formula,” Foggo told Turkish Minute.

According to the Deep Poverty Network precarious employment as street sellers, trash collectors, flower sellers, textile workers, waiters and others with similar jobs have experienced difficulties during the COVID outbreak, even in accessing food.

However, recently released photos of President Erdoğan’s new $74 million summer palace in Marmaris – with 300 rooms, a private beach and a swimming pool — have outraged people in Turkey, who are struggling to find jobs and provide food for their families.

“Erdoğan’s wife tells us to eat less for the sake of the Turkish economy, but they live in palaces. I can’t find a job, I can’t send my children to school because I can’t even buy clothes or school bags for them. They are aware of us – poor people in Turkey — and don’t help us. I don’t think they believe in God anymore,” says Döndü, who used to work as a cleaning lady before the pandemic.

At a public event Turkey’s first lady, Emine Erdoğan, who in recent years came under fire for carrying a $50,000 handbag, suggested ways to avoid wasting food after austerity measures were introduced by the president.

In her speech Emine Erdoğan advised preparing a grocery list before going shopping, reducing food portions and eating fruits and vegetables in season to prevent food waste. “Let’s stop storing food that we know will spoil and buy only as much as we actually need,” she said.

Döndü, who was unable to hold back tears on the phone during the interview with Turkish Minute, thinks their situation will get worse because she has lost hope of finding a new job.

“I haven’t been able to find a new job during the pandemic. I was working in three different houses, and all of them fired me when the pandemic started. The women said under these circumstances they can’t pay for housework and would do it themselves. My neighbors and good people are giving us food, but I know that one day they will give up and stop coming,” says Döndü.

The “Poverty Report” drafted by the Economy Commission of the pro-Kurdish Peoples’ Democratic Party (HDP) states that 60 percent of the workforce in Turkey earns the minimum wage or less.

“At least 20 million people in Turkey live under the poverty line. Taken together with the people who have lost their jobs, 30 million people live below that line.” the report says

Another report by the Deep Poverty Network NGO revealed that 67 percent of workers who rely on daily wages have become unemployed during the pandemic.

The “Income and Living Conditions Survey” released by the Turkish Statistical Institute (TurkStat) gives the official statistics on poverty, but many experts believe these figures do not reflect the real picture. According to the 2019 survey, up to 17 million people live below the poverty line in the country of 81 million.

Data for the pandemic-hit 2020 will be released in September; however, experts are sure there will be a major increase in people living below the poverty line and the number of poor.

A significant increase in unemployment and a loss of income in low and middle-income groups as well as the government’s failure to extend needed support are seen as the main reasons for Turkey’s deep poverty.

According to Foggo, the difference between the past and present is, in a single word, hunger. “I have been working among communities in deep poverty for years. We used to engage in organizing work among these groups, establishing centers, but we’ve never encountered such a lack of food and deep hunger in Turkey,” she says.

She also brings to mind the Deep Poverty Network’s research results and states that in addition to those people who struggle to feed their families and pay for housing, millions of families are unable to pay for electricity.

In April the World Bank estimated that Turkey’s poverty rate rose to 12.2 percent last year, from 10.2 percent in 2019, and said returning to pre-pandemic levels would be a challenge.

Foggo underlines the fact that poverty is a human rights violation. During the pandemic, Foggo started a campaign with the hashtag #EvindenDeğiştir (#ChangeFromHome) to raise awareness about families, and in particular women and children, who faced huge difficulties in accessing such necessities as food, clothing, health, education and psychological support.

According to Foggo deep poverty also leads to violations of children’s rights when they aren’t accustomed to adequate food and a safe environment, both of which are necessary for their physical, mental, social and emotional development.