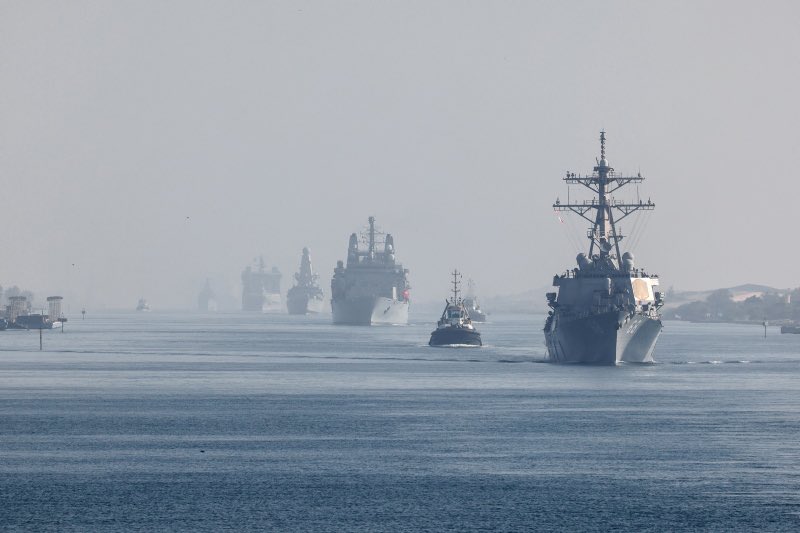 Relations between Russia and the UK have been deteriorating in recent days due to confrontations that have taken place in the Black Sea and eastern Mediterranean. Russian aircraft and coast guard ships harassed the Royal Navy’s HMS Defender because Russia claimed that Defender had violated Russian territorial waters off Crimea. According to a statement issued by the Russian Ministry of Defense, Russian coast guard boats and then aircraft fired warning shots at Defender, which had not responded to radio calls. The UK Ministry of Defense denied the Russian claims and said the ship was sailing in Ukrainian waters in accordance with international law by using its right of innocent passage. Furthermore, the discovery at a bus stop of confidential UK Ministry of Defense documents that included the activities of Defender in the Black Sea escalated the conflict to another level.

The UK was operating under a plan

The documents mentioned above include alternate routes for HMS Defender while proceeding to Batumi and the possible Russian reaction to each course of action.

It is clear that the UK Ministry of Defense had correctly predicted the possible consequences of such an act. It means that the deliberate violation of Crimea’s territorial waters by Defender and the presence of journalists on board were proof that the UK wanted to test Russia’s reaction.

NATO, the US and the UK have been unable to deter Russia

As can be remembered, the international community did not accept Russia’s annexation of the Crimean Peninsula. Since 2014 NATO has deployed Standing NATO Maritime Groups in the Black Sea as part of its Assurance Measures. In addition, like the US, the UK sends warships to the Black Sea to support Ukraine and makes port visits. However, the activities carried out by NATO, the US and the UK have not sufficed to deter Russia.

Although a concrete result could not be reached in the bilateral meeting between Russian President Vladimir Putin and US President Joe Biden during the NATO Leaders Summit in June, they agreed to keep diplomatic channels between the two states open. For the Biden administration, it is crucial to focus on the merits of China and the support of Russia in this regard. Therefore, although the Biden administration rhetorically takes a harsh stance against Russia, it is difficult to say that it maintains the same tone.

In these circumstances, Britain’s attitude to provoke Russia should be carefully analyzed. As was clearly stated in the British Ministry of Defense statement, HMS Defender exercised its right of innocent passage in Ukrainian territorial waters off the Crimean Peninsula.

The 1982 UN Convention on the Law of the Sea (UNCLOS) grants warships the right, under certain conditions, to use the territorial seas of other countries for innocent passage. The right of innocent passage encompasses two separate concepts. The first is the right of way; the second is that the passage is harmless. According to Article 19 of the convention, harmless passage should not prejudice a coastal state’s peace, order or security. Since the international community refused to accept the annexation of Crimea, Defender legally used its right of innocent passage in Ukrainian territorial waters. For this reason, she did not respond to the calls made by the Russian coast guard and aircraft, nor did she take into account the warning shots fired afterward.

Russia clearly demonstrated its determination not only politically, but also militarily, in protecting its position in the context of Crimea’s annexation by harassing HMS Defender with its coast guard boats and aircraft.

The UK raises tensions in the Black Sea

The UK has not been able to persuade the Biden administration to impose tougher sanctions on Russia. That’s why the UK wanted to exploit the aggressive Russian behavior — to convince the US. The deployment of HMS Defender in the Black Sea before Exercise Sea Breeze is in line with the UK strategy. Russia is very sensitive about this exercise, and any tension that occurs during the exercise can lead to unexpected results. Sea Breeze is a multinational exercise that has been cohosted and planned annually by the United States since 1997 to support Ukraine.

In accordance with the recent events and Russia’s general attitude in the region, it is out of the question for Russia to take a step back regarding Crimea and its territorial waters. Likewise, suppose a warship belonging to the US or any country participating in the exercise sails within 12 nautical miles of the Crimean coast. In that case, undesired incidents may occur in the region.

Putin: They can’t fight us

The tension between Russia and the UK in the Black Sea has also affected the eastern Mediterranean. A dogfight took place between F-35Bs from the HMS QE II carrier strike group and Russian aircraft. The Russian Navy filed a NOTAM (Notice to Airmen) for dangerous areas around the course of the carrier strike group. Russian President Putin, in response to a question on TV, said it was difficult to think that World War III could break out even if Russia were to sink Defender. “Why did they need such a provocation?” Putin was asked. “To show that they do not respect the Crimeans’ choice to join Russia,” he replied. Stating that the West is acting hypocritically on Ukraine, Putin said: “They made a lot of noise because we were conducting exercises on our territory near the Ukrainian border. Since they were so worried, I ordered the defense minister to gradually end the exercises and withdraw the troops. But instead of responding positively, what did the West do? They came to our borders,” he said.

Moore: Russia is a declining power

In an interview in April Richard Moore, the head of MI6, said, “It is clear that Russia is in economic and demographic decline,” and condemned alleged poisoning incidents involving Moscow on British soil. Moore described Russia’s behavior as “reckless” and stated that Western allies were acting together against Russia for this reason. Putin responded to Moore about Russia’s “declining power,” saying, “He’s new to this role, he’ll gain some experience and then will likely revisit his assessment that Russia is a declining power.” The Russian leader told Moore, “So why worry, just live your life and don’t try to disrupt Russian-British relations any further. Relations between the two countries improved last year. Everything will be better if those relations are not interfered with.”

As is clear from the statements and developments, relations between the UK and Russia have been deteriorating by the day. The leak of confidential information belonging to the UK Ministry of Defense also showed that there is no consensus in the British bureaucracy regarding relations with Russia. The UK has been trying to persuade the Biden administration to pursue a tougher policy on Russia by getting Russia to react harshly, as in the case of HMS Defender. The Black Sea will heat up in the coming days. Meanwhile, Russian Foreign Minister Sergey Lavrov’s visit to Turkey for bilateral talks shows that Russia is trying to clarify Turkey’s position on the Crimea and Black Sea issues.

Apart from all this, it should be noted that HMS Defender and its activities were a well-planned and executed political-military maneuver that demonstrated how the navy should be used as a diplomatic tool.