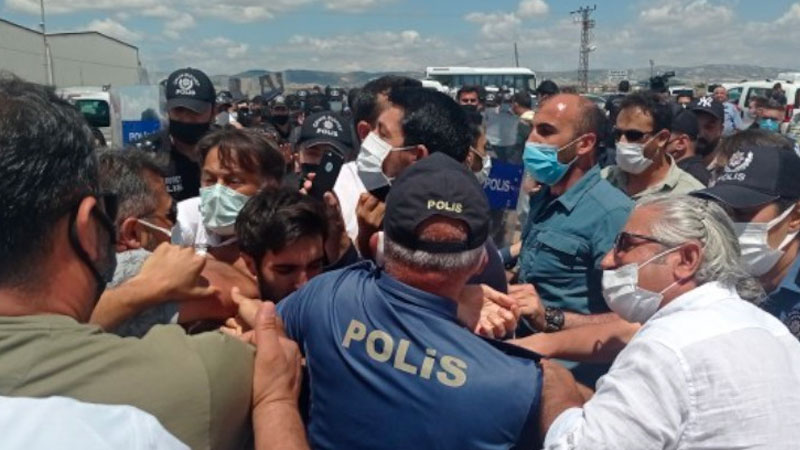 The son of a former member of the Turkish legislature who was detained with four others on Monday while demanding the former deputy’s release from prison in line with a top court ruling was released from detention on Monday evening.

Turkey’s Constitutional Court on July 1 ruled that Turkey had violated the rights of Ömer Faruk Gergerlioğlu, a former pro-Kurdish Peoples’ Democratic Party (HDP) lawmaker and a prominent human rights activist, in his imprisonment on conviction of dissemination of “terrorist” propaganda.

The court ruled that Gergerlioğlu’s right to be elected and engage in political activities as well as his right to liberty and security were violated. Despite the court’s ruling, which required Gergerlioğlu’s immediate release from prison, the former deputy has not been freed, prompting his son, Salih, and some HDP officials and rights activists to launch a “justice watch” on Monday in front of Sincan Prison in Ankara where Gergerlioğlu is jailed.

The police used force to disperse participants of the justice watch and detained Gergerlioğlu’s son, Salih, and four others including a journalist; Melek Çetinkaya, the mother of a former military cadet; and two HDP officials. The four detainees were released later on Monday, while Nazım Fayık, a cameraman for the Artı TV station, was released under judicial supervision.

Çetinkaya, a rights activist and the mother of a former cadet who was jailed for life on coup charges, has been fighting for the release of cadets who claim they were unaware that a coup was underway as a putschist bid unfolded on July 15, 2016, when rogue soldiers failed in their attempt to take over the government after skirmishes with pro-government factions.

Photos showed Salih Gergerlioğlu’s T-shirt was ripped in the altercation with the police.

The HDP said in a statement on Twitter, “Gergerlioğlu is a deputy of the people, of their will. He is being unlawfully held hostage despite the Constitutional Court ruling. We will continue our fight until all our friends who are held hostage are released. We will win.”

Gergerlioğlu was stripped of his status in parliament on March 17 after conviction of disseminating “terrorist” propaganda in a 2016 social media post, where he commented on a story that reported on outlawed Kurdish militants calling on the Turkish state to take a step towards peace.

A two-and-a-half-year jail sentence handed down to him on Feb. 21, 2018 was upheld by the Supreme Court of Appeals on Feb. 19, 2021, and the 55-year-old politician, who has shone a light on controversial topics including torture and prison strip-searches in Turkey’s prisons and detention centers, was taken into custody at his home on April 2 and sent to prison.

In his application to the Constitutional Court, Gergerlioğlu referred to the top court’s recent ruling on the case of Enis Berberoğlu, an MP from the main opposition Republican People’s Party (CHP). The court decided unanimously in January that Berberoğlu’s right to stand for elections and engage in political activities had been violated by the lower courts.

Berberoğlu was initially sentenced to 25 years in prison in 2017 on espionage charges for providing the Cumhuriyet newspaper with a video purporting to show Turkey’s National Intelligence Organization (MİT) trucking weapons into Syria.

Gergerlioğlu was attacked by Justice and Development Party (AKP) lawmakers in December after he brought widespread claims of strip-searches and harassment in prisons and detention centers to the floor of parliament.

The revocation of Gergerlioğlu’s status reduced the HDP’s seats in the 600-member assembly to 55. The parliamentary status of two other HDP lawmakers was removed last year due to convictions against them.

The AKP government accuses the HDP of having links to the outlawed Kurdistan Workers’ Party (PKK), listed as a terrorist organization by Turkey and its Western allies. The party denies the government’s claim and says it is working to achieve a peaceful solution to Turkey’s Kurdish problem. Hundreds of HDP politicians, including the party’s former co-chairs, are behind bars on terrorism charges.