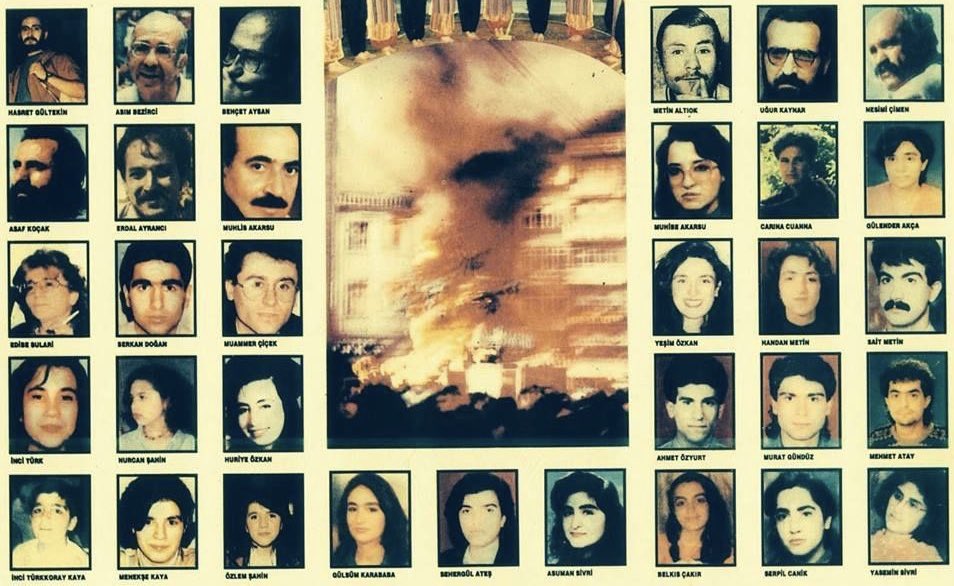 Families of the victims of a 1993 fire at the Madımak Hotel in Sivas commemorated their loved ones in the city on the 28th anniversary of the massacre, Turkish media reported.

The families were accompanied by delegations from the Republican People’s Party (CHP) and Peoples’ Democratic Party (HDP) as well as representatives from Alevi organizations and CSOs during the ceremony held in front of the hotel.

The victims’ families and attendees called on the government to turn the hotel into a “museum of shame,” saying they were still waiting for justice.

Some 5,000 people marched to the Madımak Hotel, where they laid carnations and photos of the victims.

Speaking on behalf of his party during the ceremony, CHP deputy group chairman Özgür Özel said no statutory limitation applies to crimes against humanity, adding, “The [massacre at the] Madımak Hotel was a crime against humanity.”

Noting that the party’s deputy group chairman, the head of women branches, party assembly members and 15 deputies were in attendance,  CHP Deputy Chairman Veli Ağbaba said: “Unfortunately, we have witnessed one of the gravest massacres in human history. [Therefore] we say that the Madımak Hotel should be declared a museum of shame.”

HDP spokesperson and Mardin deputy Ebru Günay said justice had not been served since the ruling party protected the assailants, claiming that the “massacre mentality” was still alive today. “We all know the perpetrators very well. We are faced with a massacre mindset. That mentality is still working with the deep state,” she added.

Federation of Alevi Bektaşi Associations Chairman Hüseyin Güzelgül stated they continue to be a voice for those who died in the Sivas massacre and vowed to keep the memory of the massacre alive.

Pir Sultan Abdal Culture Foundation (PSAKD) Chairman Gani Kaplan said, “It is the state itself that was behind the Sivas massacre.”

Nilgün Karababa, the elder sister of Gülsüm Karababa, who died in the fire, expressed regret for not being able to take the case to the European Court of Human Rights (ECtHR). “We commemorate our lost ones and are engaged a legal battle. Yet our main regret is that we were not able to take such a serious case to the ECtHR,” she said.

The ceremony ended with a semah, an Alevi religious rite.

Meanwhile, İYİ (Good) Party leader Meral Akşener posted a message on Twitter commemorating the massacre. “Twenty-eight years ago a fire was set at the Madımak Hotel with a torch that never died away in the deepest part of our hearts. Commemorating those who lost their lives and wishing God’s mercy on them,” she tweeted.

On July 2, 1993 an angry mob torched the Madımak Hotel, killing 37 people, mostly Alevi artists and scholars who were there to attend a conference hosted by the PSAKD.

In attendance was Aziz Nesin, a left-wing Turkish short story writer, hated among religious Sunnis in Turkey, who had become the target of attacks for attempting to translate Salman Rushdie’s controversial novel “The Satanic Verses” into Turkish.

A group of radical Islamists, having been provoked by several local political leaders, gathered in front of the hotel following Friday prayer and accused conference participants of being infidels.

Thirty-three attendees, two hotel staff members and two protesters died in the fire. Nesin was able to escape because the attackers initially failed to recognize him.

In a controversial move President Recep Tayyip Erdoğan in 2020 used his presidential power to pardon a man who was given an aggravated life sentence for his role in the Sivas massacre.

A number of lawyers who defended the suspects in the massacre later became politicians in Erdoğan’s ruling party.