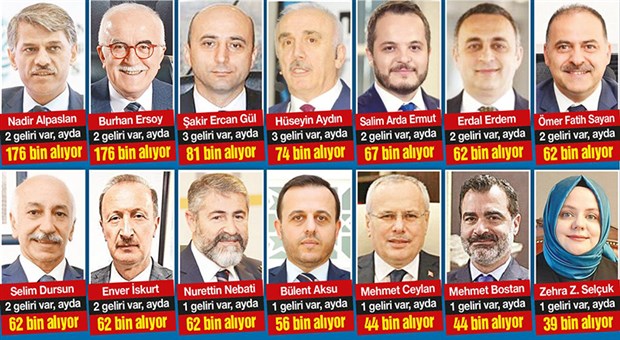 The total salaries of some AKP bureaucrats exceed even President Recep Tayyip Erdoğan’s monthly salary of TL 88,000, equivalent to around $10,000.

“Most of them were former deputy candidates or former deputies of the AKP. People are hungry, but pro-government figures are rich with salaries. What kind of a system is this?” asked CHP lawmaker Deniz Yavuzyılmaz.

Turkey’s ruling AKP and its leader Erdoğan are widely criticized by the opposition for getting its cronies paid several salaries, a practice that has sparked public outrage amid the country’s struggling economy.

Even AKP supporters disapprove of this cronyism, as revealed in a recent survey by MetroPOLL.

The survey showed that 61 percent of AKP supporters do not approve of bureaucrats and AKP advisors being paid more than one monthly salary by different companies or state agencies. This disapproval figure came in at 89 percent among CHP voters, 85.5 percent among pro-Kurdish Peoples’ Democratic Party (HDP) voters and 72.6 percent among Nationalist Movement Party (MHP) voters.

Multiple salaries for a bureaucrat or AKP advisor was considered wrong by 70.6 percent of respondents in total.

The list of AKP bureaucrats who are paid two or three salaries under different state job titles is as follows: