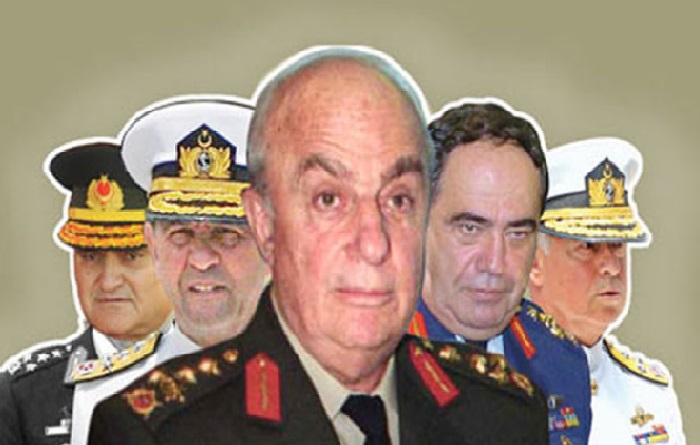 Turkey’s Supreme Court of Appeals has overturned the acquittal of seven former military members including a retired general who stood trial on coup charges due to an alleged military plot in 2003 to oust the ruling Justice and Development Party (AKP) Turkish media outlets reported.

The coup plot, called “Sledgehammer,” was exposed in 2010 by the now-defunct Taraf newspaper. As part of the plot, the military is claimed to have planned drastic measures to foment unrest in the country in order to remove the AKP from power.

At the end of the trial in September 2012, an İstanbul court sentenced 236 of the 365 Sledgehammer defendants to prison, while the rest were acquitted. Three retired generals were sentenced to life in prison on charges of “attempting to overthrow the government by force,” but the sentences were later reduced to 20 years because of the “incomplete attempt at staging a coup,” the court said. All 236 defendants, including the generals, were released immediately after the top court’s decision, and they were acquitted of all charges in a court decision in March 2015. However, prosecutors appealed the acquittal of seven defendants including retired general Çetin Doğan on the grounds that their acquittal was against the law.

The 16th Criminal Chamber of the Supreme Court of Appeals overturned the acquittals of the seven defendants.

The top court said voice recordings belonging to the defendants show that they agreed on the establishment of national government following the allegedly planned coup and detention of ruling party politicians. The court said the defendants should be charged with “agreeing to commit a crime,” which requires a prison sentence between three and 12 years under the Turkish Penal Code (TCK).

Defendants in the Sledgehammer trial claim, however, that the documents referring to the alleged coup attempt are forged. One of the arguments cited by the defendants as evidence is the use of the Calibri font in documents dated 2003. This font, however, was only introduced by Microsoft in 2007.

In the meantime, a Turkish prosecutor earlier this month demanded a prison sentence of up to 45 years for jailed journalist Mehmet Baransu on various accusations concerning the revelation of state secrets in his news report about the Sledgehammer coup plot in the Taraf daily in 2010.

In a previous court statement, Baransu said Sledgehammer was an authentic coup plot. “I would have written about it today [if I had the chance]. I would have notified [the judicial authorities] about this crime, as a journalist, as a citizen. If I had not written that news report, I would have committed a crime,” Baransu had earlier said in his defense.

The Sledgehammer coup plot included bombing two major mosques in Istanbul, an assault on a military museum by people disguised as religious extremists and the raising of tensions with Greece through an attack on a Turkish plane and blaming the incident on Turkey’s Aegean neighbor.