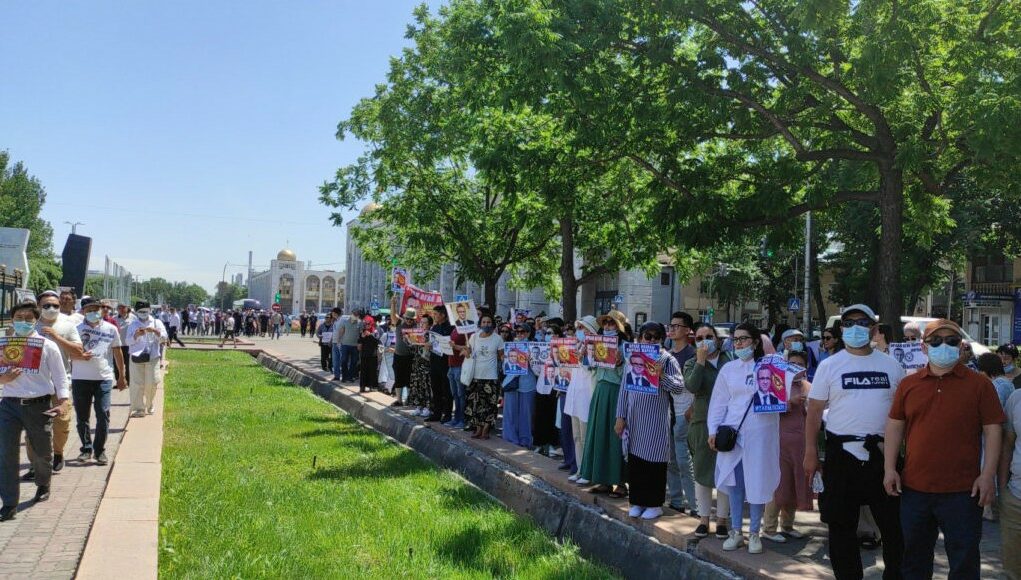 Kyrgyz who have been protesting since the suspicious disappearance of an educator in the country held a silent vigil in Bishkek on Monday in the hope of finding the missing educator.

Orhan İnandı, the founder and president of the Turkish-Kyrgyz Sapat school network operating in Kyrgyzstan, went missing in Bishkek on the evening of May 31 and is feared to have been abducted by Turkey’s National Intelligence Organization (MİT) due to his alleged links to the Gülen movement.

A large number of Kyrgyz held a silent vigil in front of the parliament and presidency on Monday that lasted for several hours. The protestors, who spoke to Kyrgyz media outlets, said they would continue their protests until İnandı is found, while some directed criticism at the Kyrgyz authorities for not carrying out an effective investigation to locate İnandı.

Nursultan Mainazarov, a graduate of the Sapat schools, said the investigation and search by Kyrgyz security agencies was poorly conducted and that there was no cooperation among state agencies to locate him.

According to political analyst Ruslan Akmatbek, Orhan İnadı is not being searched for effectively by Kyrgyz authorities, and some people think there is a deal between the governments of Kyrgyzstan and Turkey to facilitate his alleged abduction.

“We all know the authorities quickly find the person they are looking for when they want to. The president has formally ordered an investigation to locate Orhan İnandı, and the Security Council has convened. In fact, it turns out they are not really interested in finding this man. There are rumors that there were talks between the two countries. The public understands what is being done sincerely and what is just a show.”

Among the protesters are graduates of the Kyrgyz-Turkish lyceum, and teachers and parents of students at the Sapat schools.

Former Kyrgyz Deputy Foreign Minister Askar Beshimov, however, says the Turkish Embassy building is inviolable based on the Vienna Convention.

“Orhan İnandI’s wife shares her thoughts and predictions. If our law enforcement agencies have evidence or witnesses, the Ministry of Foreign Affairs can contact them. There is no reason to talk to them today,” he told the Kyrgyz media.

The Kyrgyz Interior Ministry previously announced that a task force was set up and a search was under way, and that the National Security Committee (NSC) was providing all possible assistance to the police.

Protests are also taking place in front of Turkish embassies and consulates in the United States and some European countries. Alumni of Sapat schools also announced a million-dollar reward for anyone who provides information leading to the locating of İnandı.