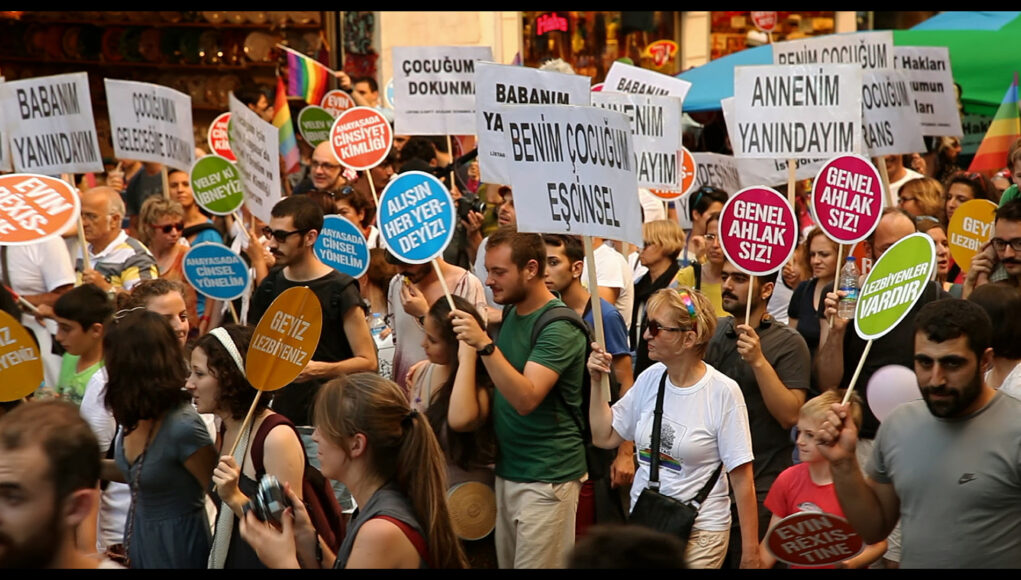 ILGA-Europe on May 17 published its annual “Rainbow Europe Map and Index, rating 49 European countries on their legal and policy situations for LGBT+ people. The three countries at the bottom of the list are Armenia, Turkey and Azerbaijan, exactly the same as last year.

ILGA-Europe ranks 49 European countries on a scale between 0% (gross violations of human rights, discrimination) and 100% (respect of human rights, full equality). Armenia was ranked 47th with an overall score of 8%, the same as last year. The only two countries that are ranked lower than Armenia are Turkey (4%) and Azerbaijan (2%).

By examining the laws and policies that have a direct impact on LGBT+ people’s human rights in six categories — equality and non-discrimination, family, hate crime and hate speech, legal gender recognition and bodily integrity, civil society space and asylum — ILGA-Europe makes recommendations to improve the situation of LGBT+ people in various countries.

Turkish Minute spoke with Can Candan, an independent filmmaker and faculty member at Turkey’s Boğaziçi University. Currently the academic advisor of Boğaziçi’s LGBTI+ student club and recently under attack by the government, Candan thinks it’s sad to see Turkey, Azerbaijan and Armenia at the bottom of the list.

“I feel the citizens of these three countries deserve much better. This situation is partly a reflection of the conservative and authoritarian regimes that are in power in these countries; however, homophobia and transphobia cannot be packaged within conservative cultural values. Azerbaijan has been ruled by the Aliyevs since 1993 and Turkey by Erdoğan since 2002. It seems that Armenia has been more fortunate in this regard as Armenians have recently been able to realize some regime changes,” said Candan.

In April 2019 Lilit Martirosyan, the first registered transgender woman in Armenia, became the first member of the country’s LGBT+ community to speak in the Armenian parliament. LGBT people in Armenia, she told the National Assembly, have been “tortured, raped, kidnapped, physically assaulted, burned, stabbed, murdered, robbed and fired from their jobs.”

Just after her speech, Naira Zohrabyan, who led the assembly’s committee on human rights, shouted, “You have violated our agenda.” Sadly, but not surprisingly, Martirosyan’s speech was followed by a torrent of death threats and verbal abuse. The chairperson of the parliamentary session she spoke at denounced her appearance.

Days later, a crowd of more than 100 supporters of nationalist and conservative groups gathered in front of the National Assembly building to protest her appearance. One lawmaker was captured on video telling demonstrators that Martirosyan should be burned alive.

Because of the social and economic problems, territorial conflicts, wars and political tribulations for long years after the fall of the Soviet Union, Armenia and Azerbaijan were faced with existential challenges. Becoming part of the Council of Europe at the start of the 2000s, the countries began the process of decriminalizing homosexuality, but they remain far from having eliminated discrimination.

Thirty-one-year-old Susanna Grigorian, (her name has been changed for purposes of anonymity), a primary school teacher who lives in Yerevan, Armenia, fought for years with herself and kept her “secret.” One day, while a student at Yerevan State University, she felt it was impossible to live with this secret any longer and decided to “confess.”

“I’m glad I made this decision, but it wasn’t easy. When I told my secret — that I’m a lesbian — to my close friends, they stopped talking to me. None of them are my friends anymore. I lost most of them. When they see me on the street, they still don’t say hello, even today…”

When she told her parents about her sexual orientation, her mother said it would have been better if she were never born and called a priest the next day, despite the fact that she wasn’t the least bit religious.

“The priest said I was possessed by a demon and sprinkled holy water on me. My parents didn’t kick me out of the house like other parents in Armenia because they would not be able to explain it to the relatives. This ‘sensitivity about relatives’ was my biggest help in explaining myself to my parents and siblings, and fortunately, they understand me and accept me and love me as I am,” she said.

Susanna doesn’t have to hide her identity at home, but that isn’t the case at the school teaches at, where she is very careful and still hides her sexual orientation. “I really want to show who I am, but I can’t. If I say I’m a lesbian, I could lose my job and my students, who I love very much. I need money to survive, and I can’t rely on my parents forever.”

According to Candan, these countries seem to suffer from a toxic, heterosexist masculinity and its consequences, and discrimination of LGBTİ+ people anywhere is a result of homophobia and transphobia. “I think the fear of the unknown and a lack of knowledge, education and discussion around gender, its expressions, human sexualities and sexual orientations are at the root of this fear,” he said.

“Those in power seem to be feeding on conservative so-called ‘traditional values’ and hegemonic masculinity in these societies and using people’s fears to hold on to power. On top of this, where the rule of law and democratic practices are weak, discrimination against LGBTİ+ people and immunity for those who commit acts of discrimination, hate speech and hate crimes are unfortunately common,” Candan told Turkish Minute.

Thirty-three-year-old Karim Mammadov (his name has been changed for purposes of anonymity), a journalist based in Baku, Azerbaijan, thinks the army is the worst place for gays, where they are subjected to terrible discrimination like he was.

“They joked about me, laughed at me. They wouldn’t sit at the same table with me. I was ordered not to leave my room. They said, ‘Don’t try to enter the same rooms as us and communicate. I also was not allowed to use the communal toilets,” Karim told Turkish Minute in a phone interview.

All this happened after Kerim admitted his homosexuality to his commander and asked for help. “I was afraid that one day they would understand who I am, I couldn’t sleep for days. I was having nightmares, they were killing or raping me in my bed… So I decided to talk about it and in this way thought maybe I would be protected,” he said.

Everyone in his unit found out about his sexual orientation, and the real nightmare began. Even after military service, he received threats for being gay. “My phone wasn’t silent for months. I heard sickening threat after sickening threat. They were saying, ‘Whether it’s true or not, you will pay for it…’ I was in a state of psychological collapse for more than five years after the army.”

In 2005 Candan resigned as chair of the film and television department of Istanbul Bilgi University after the university administration refused to take action on a sexual harassment case. He was subsequently fired. In 2012 he helped establish Boğaziçi University’s Sexual Harassment Prevention Commission. He continues to actively advocate for conflict resolution, human rights and freedom of speech and expression as well as environmental protections.

“I believe the human stories that are told in various forms are able to touch people’s hearts. Collaboration with and learning from the experiences of activists beyond their borders is empowering. One of the things we have done was to make our documentary film ‘My Child’ available with subtitles in the languages of neighboring countries, including Armenian subtitles, for example, and organize screenings,” said Candan.

“My Child,” a feature documentary on the parents of LGBT+ in Turkey, premiered in February 2013 at the !f International Independent Film Festival in Istanbul and has been exhibited and distributed widely, including theatrical, DVD and online releases. LISTAG (Families of LGBTs in Istanbul), the family group featured in the documentary, has been in touch with activists and similar initiatives in both Armenia and Azerbaijan.

Candan thinks prevention of discrimination against LGBT+ and equality regardless of one’s gender, gender expression and sexual orientation are very important cultural values anyone must and can uphold. According to him, the fight for human rights is a marathon: You need to push forward and sustain the movement to get the results you want and deserve.

“Various forms of collaboration and solidarity give us strength, and I believe that’s a valuable resource we need to tap into more. As human rights activists, we need to make sure that every single LGBTİ+ person in Azerbaijan, Armenia and Turkey feels that they are a precious, indispensable and loved part of a very large family that is spread throughout these artificial borders,” said Candan.