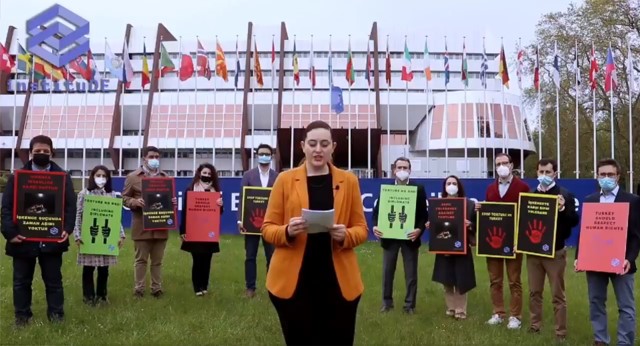 A group of former Turkish diplomats gathered in front of the Council of Europe (CoE) building on Wednesday to mark the second anniversary of torture of their colleagues at the Ankara Police Department and to condemn human rights violations committed by the Turkish government, the Stockholm Center for Freedom reported.

“Two years have passed since the torture episode suffered by our colleagues,” a statement read by the former diplomats said. “However, torture incidents still continue to occur in Turkey today.” According to the statement the torture was perpetrated upon instructions from “above” and “certain Foreign Ministry officials played a role in determining which individuals were to be tortured.”

In May 2019 some 100 former diplomats were detained by the authorities over alleged exam cheating, an act the Turkish government links to the Gülen movement, a faith-based group inspired by Muslim cleric Fethullah Gülen. On May 26 former Peoples’ Democratic Party (HDP) deputy and human rights defender Ömer Faruk Gergerlioğlu posted a tweet saying there were serious allegations of torture of former diplomats, including rape by batons.

Following the allegations, the Ankara Bar Association conducted an investigation and said the victims’ statements “confirm that the individuals were subjected to blows, torture and ill-treatment.” The victims said they were forced to sign prepared statements.

The incident came amid news that former prime minister and foreign minister Ahmet Davutoğlu was working to establish a new political party, leading to speculation that the former diplomats were tortured to get statements incriminating Davutoğlu about the foreign ministry’s entrance exams held during his tenure.

Despite the credible allegations and the bar association’s report, however, on August 6, 2020 the Ankara Chief Public Prosecutor’s office said there were no grounds to prosecute the case.

“With this decision, the perpetrators and instigators of this grave incident might have been led to believe that their actions will be forgotten and that they will go unpunished,” the statement said. “However, torture is a crime against humanity under both domestic and international law, and is not subject to a statute of limitations.”

Following the abortive putsch, the Turkish government declared a state of emergency and carried out a massive purge of state institutions under the pretext of an anti-coup fight. The Ministry of Foreign Affairs was among the institutions that were hit the hardest by the purges. According to Deputy Foreign Minister Yavuz Selim Kıran, 550 career diplomats — around 30 percent of the Turkish diplomatic corps — had been dismissed as of May 2019.

More than 130,000 civil servants, including 4,156 judges and prosecutors, as well as 29,444 members of the armed forces were summarily removed from their jobs for alleged membership in or relationships with “terrorist organizations” by emergency decree-laws subject to neither judicial nor parliamentary scrutiny.