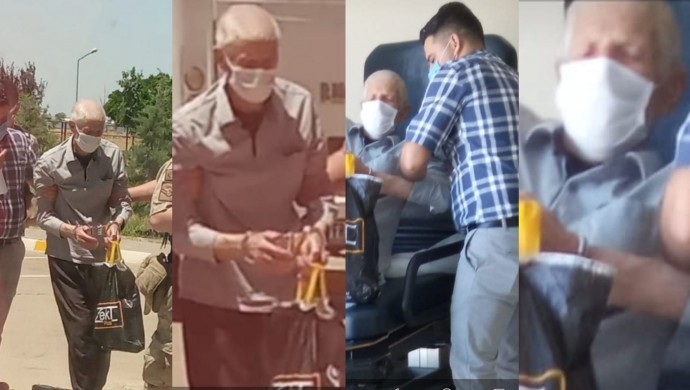 Images on social media of an ailing 83-year-old man incarcerated in Diyarbakır Prison being taken to a hospital in handcuffs has caused outrage among activists, who are demanding his immediate release, the Stockholm Center for Freedom reported.

Mehmet Emin Özkan was seen barely able to walk despite the support of two guards., In prison for the past 25 years, Özkan has suffered four heart attacks. He has other health problems as well, such as high blood pressure, toxic goiter, osteoporosis, kidney disease, memory loss and loss of hearing and sight.

Özkan’s daughter, Selma Özkan, called on authorities to end her father’s suffering and release him before he dies in prison.

Speaking to the Duvar news website, lawyer and human rights activist Eren Keskin said Özkan and other sick inmates should be released immediately. “Political prisoners with multiple health problems are issued medical reports saying they are fit to remain in prison,” she added.

Özkan has denied any responsibility in the incident.

Özkan is now awaiting a decision on a retrial and has a hearing on May 6.

Human rights activists and opposition politicians have frequently criticize authorities for not releasing critically ill prisoners so they can seek proper treatment. Human rights defender and former Peoples’ Democratic Party (HDP) deputy Ömer Faruk Gergerlioğlu said ill prisoners were not released until they were at the point of no return.

Since April 2020, four seriously ill prisoners over the age of 70 have died in penal institutions in Turkey; five inmates suffering from cancer died shortly after they were released; and 16 died of chronic illnesses while imprisoned.